"update inverses"
Golden AI edited on 10 May, 2022
Edits made to:
Infobox (+1 properties)
Infobox
Director of (film)

Sean Bean Just Found Out the ‘Game of Thrones’ Ending, but Admits He’ll Probably Forget It

Time season 2: When will the Sean Bean series return?

His father, Brian Bean, was a welder, and his mother, Rita Bean, worked as a secretary, but became a housewife after the birth of his children.

Sean grew up an ordinary kid, he did very poorly in school, he liked to play soccer more than he liked to study lessons.

After high school, with honors in art and English, Sean sold cheese in the supermarket, shoveled snow, and worked in his father's welding shop.

He didn't like the Army, and since he was pretty good at drawing, he decided to try being an artist. As a result, after leaving 2 colleges, he came to theater.

He then entered and successfully graduated (with a silver medal for his graduation role in Waiting for Godot) from the Royal Academy of Dramatic Art in London.

His professional acting debut was the stage "Citizen`s Theatre" in Glasgow, where Sean Bean played Tybalt in "Romeo and Juliet.

The actor then worked at the Royal Shakespeare Theatre.

Bean's career in film and television began in 1984.

The most famous roles of Sean Bean are the IRA gunman in "Patriot Games", the villain in "Clarissa", agent 006 in "GoldenEye".

Yet the real big break for Sean came in 1993, when he became the intrepid Lieutenant Richard Sharpe in the famous series of television movies about his adventures during the Napoleonic Wars. And Sharpe was supposed to be Paul McGann, but at the last minute he could not participate, and all the glory went to our hero.

In "Sharpe" there is a scene where the hero and his girlfriend fall from the horse into the river. The real case: the horse stumbled, the actors fell into the water, and the director liked the shot so much that he saved the episode in this form.

Russian audiences are familiar with the actor also mainly through the role of the royal gunfighter Sharpe.

His third wife (1997-2000) is actress Abigail Cruttenden, whom he met on the set of the series about Major Sharpe. Abigail played his fiancée and then wife Jane. In 1998, his daughter Evie Natalie was born. 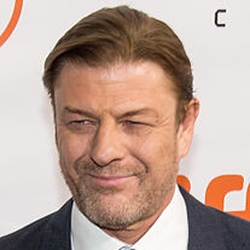