Satbayev University is one of the oldest educational institutions in the Republic of Kazakhstan. History of the University. K.I. Satpayev - the flagship of the engineering education of the republic - is inextricably linked with the history of our state, its culture and the system of higher education.

The university was founded in 1934 as the Kazakh Mining and Metallurgical Institute. In the 30s of the XX century. in order to solve the problems of eliminating the technical and economic backwardness of the national economy, an urgent need arose for the development of higher technical education in the country. To solve this problem in the capital of Kazakhstan, Alma-Ata, the Kazakh Mining and Metallurgical Institute (KazMMI) was opened with two faculties: mining and non-ferrous metals. The first bell of the first academic year at KazMMI rang on September 19, 1934. This very day was the beginning of the development of technical sciences in Kazakhstan.

The Institute played an important role in the formation and development of scientific and practical activities in the field of geology, mining, metallurgy of Kazakhstan. The scientific school, formed on the basis of the institute, made a great contribution to the development of the ore resource base of the republic and the organization of new technologies for mining and metallurgical production.

"Move some fields to suggestions"
Golden AI edited on 15 Oct, 2018
Edits made to:
Infobox (-1 properties)
Infobox
Named after 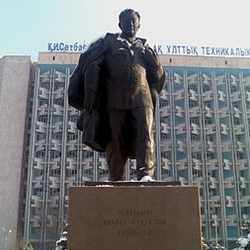