A robotic vacuum cleaner, sometimes called a robovac or a Roomba as a generic trademark, is an autonomous robotic vacuum cleaner which has a limited vacuum floor cleaning system combined with sensors and robotic drives with programmable controllers and cleaning routines. Early designs included manual operation via remote control and a "self-drive" mode which allowed the machine to clean autonomously without human control. Some designs use spinning brushes to reach tight corners, and some include a number of cleaning features along with the vacuuming feature (mopping, UV sterilization, etc.).More recent models use artificial intelligence and deep learning for better mapping, object identifi

Marketing materials for robotic vacuums frequently cite low noise, ease of use, and autonomous cleaning as main advantages.The perception that these devices are set-and-forget solutions is widespread but not always correct. Robotic vacuums are usually smaller than traditional upright vacuums, and weigh significantly less than even the lightest canister models. However, a downside to a robotic vacuum cleaner is that it takes an extended amount of time to vacuum an area due to its size. They are also relatively expensive, and replacement parts and batteries can contribute significantly to their operating cost.

In 1956, the American science fiction author Robert A. Heinlein described the concept of a robotic vacuum cleaner with a recharging dock in his novel The Door into Summer: "Basically it was just a better vacuum cleaner .... It went quietly looking for dirt all day long, in search curves that could miss nothing .... Around dinner time it would go to its stall and soak up a quick charge."

In 1969 on 2 April an episode of The Avengers was broadcast in which the character Inge Tilson played by Dora Reisser says "...I saw a demonstration once. A robot vacuum cleaner. It swept around the house, went back into its cupboard, automatically plugged in and recharged itself...". The teleplay for this episode which was entitled "Thingumajig" was written by Terry Nation. It was episode 27 of Season 7. 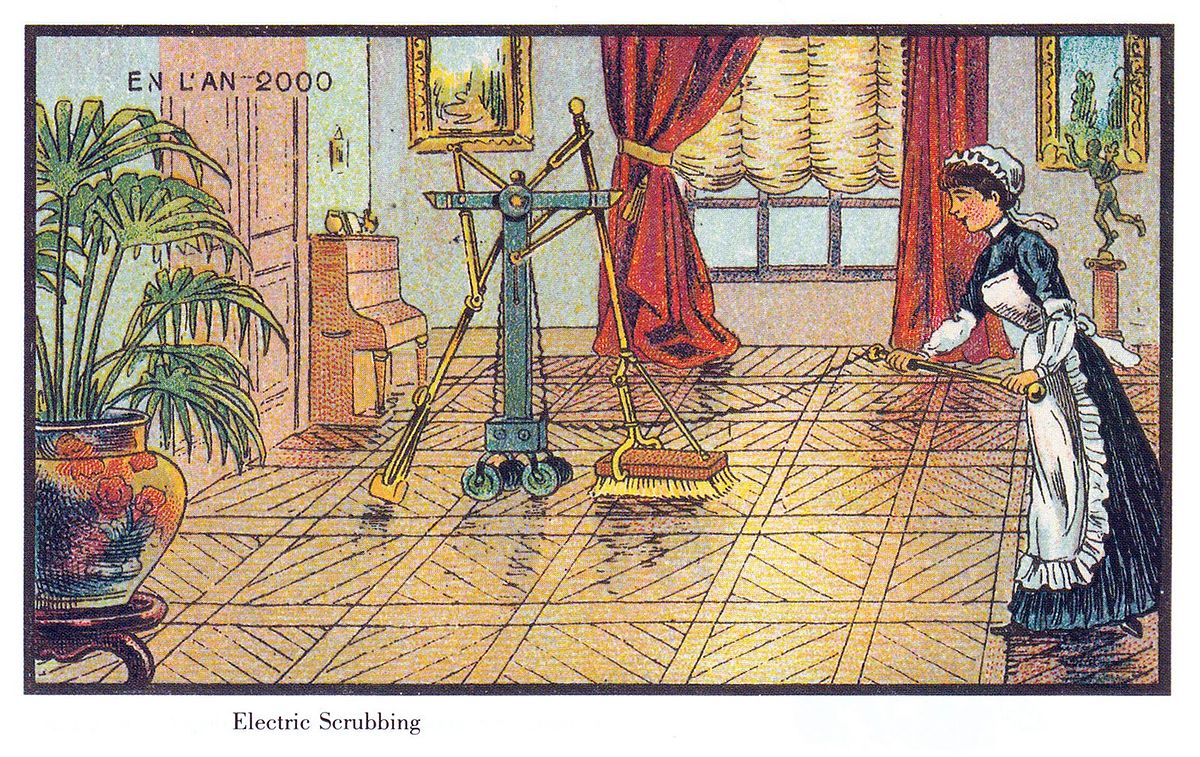 In 1990, three roboticists, Colin Angle, Helen Greiner, and Rodney Brooks, founded iRobot. It was originally dedicated to making robots for military and domestic use. It launched the Roomba in 2002, which was able to change direction when it encountered an obstacle, detect dirty spots on the floor, and identify steep drops to keep it from falling down stairs. The Roomba proved to be the first commercially successful robot vacuum.[9] In 2005, iRobot introduced the Scooba, which scrubbed hard floors.

In 1996, Electrolux introduced the first “Robotic Vacuum Cleaner”, the Electrolux Trilobite.[5] It worked well but had frequent problems with colliding with objects and stopping short of walls and other objects, as well as leaving small areas not cleaned.[5] As a result, it failed in the market and was discontinued.[5] In 1997, one of Electrolux's first versions of the Trilobite vacuum was featured on the BBC's science program, Tomorrow's World.[10]

In 2001, Dyson built and demonstrated a robot vacuum known as the DC06. However, due to its high price, it was never released to the market.[11] Electrolux Released the Trilobite robotic vacuum cleaner. The Robotic vacuum cleaner launched at a price of $1,800.00. There were two models: The ZA1 and the ZA2.

In 2010, the Neato Robotics XV-11 robotic vacuum introduced laser based mapping, allowing navigation in straight lines rather than the traditional random navigation.[12]

In 2016, iRobot CEO claimed that 20% of vacuum cleaners sales worldwide were robots.[15]

As of 2018, obstacles such as dog feces, cables and shoes remain very difficult for robots to navigate around.