Robin Hunicke (/ˈhʌnɪki/; born March 15, 1973) is an American video game designer and producer. She is a professor of game design at UC Santa Cruz and the co-founder of Funomena.

Hunicke began her career at Electronic Arts where she worked on multiple games including MySims as Lead Designer and Boom Blox and its sequel as a Producer. After leaving EA, she was hired by thatgamecompany where she produced Journey, an online cooperative game for the PlayStation 3. After its completion, Hunicke joined Tiny Speck to develop the social MMORPG Glitch, teaming with Katamari Damacy creator and personal friend Keita Takahashi. Prior to the release of Glitch, Hunicke left Tiny Speck to co-found Funomena together with Martin Middleton, former teammate and engineer at thatgamecompany. In October 2012, Funomena announced their first project: "to build a game that takes data from a pedometer and does something fun with it." They announced two new games, Wattam (directed by Keita Takahashi) and Luna, "a tactile puzzle game set in a vibrant and sculptural story-book world", both of which have been released and were executive produced by Hunicke

Hunicke is recognized in the industry for her support of independent game development, experimentation in game design, research in dynamic difficulty adjustment, and the advocacy of women within the games industry

Hunicke was born on March 15, 1973 in Albany, New York. She holds a B.A. degree from the University of Chicago and is finishing a PhD in Artificial Intelligence with a focus on Games and Game Design from Northwestern University.

Hunicke began her work with Electronic Arts at Maxis, where she became a designer for The Sims 2: Open for Business after meeting famed game designer and Sims director Will Wright. Following her work on The Sims 2, Hunicke went on to become the lead designer for MySims on the Nintendo Wii, and later, was a producer for Boom Blox and its sequel, Boom Blox: Bash Party.

Following her work at Electronic Arts, Hunicke joined thatgamecompany as producer.[9] She joined the team in the early conceptual stages for the studio's third project Journey, a multiplayer cooperative adventure game released in early 2012.

After the release of Journey, Hunicke left thatgamecompany to join Tiny Speck to continue development of their social MMORPG Glitch.

Prior to the release of Glitch, Hunicke left Tiny Speck to co-found Funomena together with Martin Middleton. They announced their first project in October 2012: "to build a game that takes data from a pedometer and does something fun with it."Their first video game is Luna, a VR-focused art game which is described as "a tactile puzzle game set in a vibrant and sculptural story-book world". They then developed Wattam, a spiritual successor of Bandai Namco's Katamari series directed by its creator, Keita Takahashi. It was released on PlayStation 4 and PC (via Epic Games Store) on December 17, 2019.

Hunicke contributes to various video game industry conferences and events throughout the year. She is an organizer of the annual Game Design Workshop at the Game Developer's Conference, where she helps organize the event and teaches with designers Doug Church, Marc LeBlanc, Frank Lantz, Stone Librande, Clint Hocking and others. Hunicke is also an organizer of the Experimental Gameplay Sessions at GDC with Jonathan Blow, Doug Church, and Chris Hecker. Many successful games have made their first public appearance at the session, including Jonathan Blow's Braid and Valve's Portal. Hunicke is also an organizer of IndieCade, an annual festival dedicated to independent game development.

Hunicke is a founding member of the IGDA Education SIG, has participated in the Indie Game Jam, helps with the Global Game Jam, teaches at UCSC, is a judge for the Independent Games Festival and a co-head of the Experimental Gameplay Workshop.

In her studies, Hunicke researches dynamic difficulty adjustment. She is also interested in how "the notions of fate, meaning, and consequence can be communicated via video games".

From 2001 to 2004, Hunicke, Marc LeBlanc, and Robert Zubeck created the Mechanics-Dynamics-Aesthetics framework to focus and improve game analysis. The framework categorizes the many aspects of a game as Mechanics, Dynamics, or Aesthetics, and outlines the inverse perspectives of designer and player. From the perspective of the designer, the Mechanics generate Dynamics which generate Aesthetics. From the perspective of the player, the player experiences the game through the Aesthetics, which are provided by Dynamics that emerge from the game Mechanics. 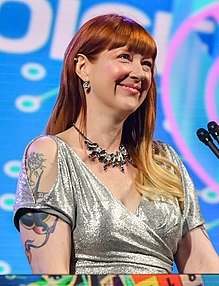 Robin Hunicke was born in Albany.

Women in Games: The Gamasutra 19