Famous As: King of Scotland

Who was Robert the Bruce?

Robert I, popularly known as Robert the Bruce, was the king of Scotland from 1306 to 1329. He led his nation against England during the First War of Scottish Independence and emerged as one of the most popular warriors of his generation. Descending from the Gaelic and Anglo-Norman nobility, Robert the Bruce was born as the eldest son to Marjorie, Countess of Carrick, and Robert de Brus, 6th Lord of Annandale. As the earl of Carrick from 1292 to 1306, he participated in William Wallace's battle against Edward I of England. Later, he was appointed as a guardian of Scotland. At the Battle of Bannockburn in 1314, Robert the Bruce defeated Edward II’s much larger English army and re-established an independent Scottish kingdom. He spent his last years in the village of Cardross, where he died in June 1329, at the age of 54. During his lifetime, Robert the Bruce married twice and fathered six children from his marriages. He also had many illegitimate children from unknown mothers, including Sir Robert Bruce. Upon his death, he was succeeded by his son David II as the king of Scots. 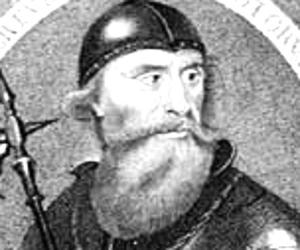 In March 1306, Robert the Bruce was crowned the king of Scots on Palm Sunday. The crown lifting was done by Bishop William de Lamberton.

After his defeat at the Battle of Methven in June 1306, his wife and daughters were sent to Kildrummy where they were guarded by his brother Neil.

He later captured Inverlochy and Urquhart Castles and ordered The Harrying of Buchan in 1308 to ensure elimination of the Comyn family. Soon, he crossed to Argyll and won over the isolated MacDougalls at the Battle of Pass of Brander.

In March 1309, Robert the Bruce held his first parliament at St. Andrews. By 1314, he had recaptured most of the castles held by the English.

On 23 June 1314, he began The Battle of Bannockburn and eventually defeated the army of King Edward II of England, killing several prominent commanders, including Sir Robert Clifford.

Robert the Bruce was born.

Who was Robert the Bruce? Everything You Need to Know