Dodsley was born near Mansfield, Nottinghamshire, where his father was master of the free school. He is said to have been apprenticed to a stocking-weaver in Mansfield, from whom he ran away, going into service as a footman. Profits and fame from his early literary works enabled Dodsley to establish himself with the help of his friends (Alexander Pope lent him £100) as a bookseller at the sign of Tully's Head in Pall Mall, London, in 1735.

He soon became one of the foremost publishers of the day. One of his first publications was Samuel Johnson's London for which he paid ten guineas in 1738. He published many of Johnson's works, and he suggested and helped to finance Johnson's Dictionary. Pope also made over to Dodsley his interest in his letters. In 1738, the publication of Paul Whitehead's Manners was voted scandalous by the House of Lords and led to Dodsley's imprisonment for a brief period. Dodsley published for Edward Young and Mark Akenside, and in 1751 brought out Thomas Gray's Elegy. He was also publisher to the Rev. Joseph Spence and Joseph Warton, and collaborated with John Baskerville, the innovative Birmingham printer.

In 1759 Dodsley retired, leaving the conduct of the business to his brother James (1724–1797), with whom he had been in partnership for many years. He died and was buried at Durham while he was on a visit to his friend Joseph Spence.

"Wikidata adding template type"
Golden AI approved a suggestion from Golden's AI on 4 Mar, 2021
Edits made to:
Infobox (+1 properties)
Infobox
Is a 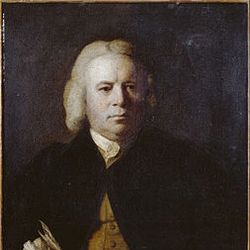