Jude Gomila edited on 24 Sep, 2018
Edits made to:
Article
Article 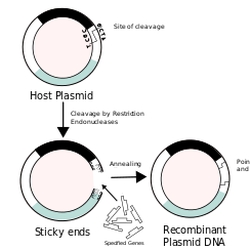 rDNA technology began with the establishment of cloning vectors, small pieces of DNA that can incorporate DNA of interest and act as stable carriers of this DNA so that it can be replicated and maintained in an organism. Since viruses had been known to carry their DNA into the cells they infect, integrate their DNA into the host genome and also pick up and carry host genome DNA along with its own DNA, the idea arose for using viruses as cloning vectors .

Bacteriophages are viruses that infect bacteria. When E. coli phage P1 infect cells, the cells lyse and bacterial chromosomal DNA becomes fragmented . The DNA pieces can be mistakenly taken up into phage particles in place of phage DNA and subsequently injected into the next host cell . Lederberg and Zinder at University of Wisconsin discovered this process in 1951 and called it transduction and the subsequent purposeful use of transduction to transfer genes of interest between strains of bacteria had a large role in the development of genetic engineering . Specialized transduction, where bacterial DNA next to the viral DNA integration site is packaged with viral DNA, is mediated by phage lambda .

While phages infect bacteria, not mammalian cells, a genetically engineered M13 phage-based vector with a transgene that allows it to enter mammalian cells has been developed . A range of mammalian viruses including Herpes simplex virus, Adeno virus, Adeno-associated virus (AAV), Vaccinia virus, murine retrovirus, lentivirus and Sindbis virus are used to transduce mammalian cells . Viral genetic material is removed and replaced with genes of interest to be delivered into cells . Viruses are efficient and effective on dissociated cells and in vivo but can be a potential risk to laboratory personnel and in the case of gene therapy, immune reactions from the recipient can pose a problem . There is risk to the host that viral vectors integrate into the genome will disrupt essential genes .

Joshua Lederberg coined the term plasmid in 1952 to refer to extrachromosomal DNA that bacteria are able to transfer to other bacteria . Bacteria transfer genes for resistance to antibiotics to other bacteria on plasmids through conjugation, a mechanism requiring physical contact . When plasmids are used in the lab, antibiotic resistance carried on plasmids conferring the ability to grow on medium containing antibiotics, is a method scientists use to select for bacteria that have successfully taken up the plasmid . The development of tools for cutting and joining DNA ends lead to the first drug created through genetic engineering, human insulin inserted into a plasmid for bacterial production of insulin for medical use .

Phage lambda virus infection of bacteria results in the generation of autonomously replicating DNA fragments from the virus, which is the origin of the first plasmid suitable for cloning, λdvgal 120 . In 1972 the first rDNA was constructed in vitro which joined simian virus 40 (SV40) DNA with λdvgal 120 . The isolation of bacterial enzymes provided the tools for cutting and pasting DNA together. Molecular cloning is when genes or other DNA sequence are isolated and inserted into plasmid vectors. The genetic material inserted into the plasmid is said to be cloned . This rDNA can be transferred into bacteria like E. coli or into yeast through a process called transformation, so that many copies or clones of the DNA sequence of interest are made. Molecular cloning plasmids contain essential sequences like the origin of replication (ORI), to direct replication, a drug-resistance gene used to select for cells which contain the plasmid and a multiple-cloning-site containing restriction enzyme sequences that are used to cut and paste in genetic material to be cloned .

Restriction enzymes or restriction endonucleases are proteins produced by bacteria that cut DNA at specific sequences. In bacteria they are used in defense against bacteriophages . In the lab they allow researchers to cut DNA at specific sequences like plasmids and insert foreign genetic material into plasmids. Certain restriction enzymes cut double stranded DNA in such a way that there are single stranded overhangs called sticky ends. If a genetic sequence to be cloned is cut with the same restriction enzyme(s) as the vector, complementary sticky ends will anneal to eachother. Pasting the DNA sequences together is called ligation and is performed by DNA ligase . Restriction endonucleases, ligases and other enzymes used in rDNA technology are commercially available from companies including New England Biolabs, Sigma-Aldrich and Thermo Fisher Scientific.

If a gene contained in a plasmid is to be expressed, so that a message RNA is transcribed and translated into a protein product, the expression vector or expression plasmid must contain a promoter that functions in the host cells or organism . The promoter sequence is where RNA polymerase and transcription factors bind to allow transcription, the copying of the coding region of the gene sequence into an RNA transcript . Many mammalian expression plasmids contain promoter sequences from viruses like CMV and SV40 .

To isolate the DNA segment of interest from one vector and move it to another, restriction enzymes are used to cut DNA which is then be separated by gel electrophoresis . The DNA of interest may be identified based on the length of the DNA fragment and sliced out of the gel and purified.

Polymerase Chain Reaction (PCR), invented in 1985 by Kary Mullis, is another tool that helped advance rDNA technology . PCR is a method of making millions of copies of a segment of DNA in a test tube. PCR used repeated cycles of heating and cooling to denature or separate the two strands of DNA, anneal primers, which are short sequences that are complementary to regions flanking the DNA segment that will be copied, and a polymerase enzyme, Thermus aquaticus (Taq). Starting after the primers Taq adds loose nucleotides complementary to the single stranded DNA to make a new double stranded piece of DNA. After many cycles, many copies of the DNA region are made. Large amounts of any genetic sequence can be quickly generated and subsequently be cloned into a vector.

A cDNA library contains only DNA sequences that are transcribed into mRNA, or genes that are turned on or expressed from a particular cell culture or tissue. Messenger RNA (mRNA) is extracted from cells and cDNA copies are made of each mRNA strand with the enzyme reverse transcriptase (originally found to be used by retroviruses) . All cDNAs are cloned into vectors. To isolate the genetic sequence from a genomic or cDNA library, the library is screened by methods involving hybridization and/or PCR . Nucleic acid hybridization uses a labeled probe that has a unique sequence complementarity to a small portion of the desired genetic segment .