Rodent genus of the superfamily muroidea

Rats are various medium-sized, long-tailed rodents. Species of rats are found throughout the order Rodentia, but stereotypical rats are found in the genus Rattus. Other rat genera include Neotoma (pack rats), Bandicota (bandicoot rats) and Dipodomys (kangaroo rats).

Rats are typically distinguished from mice by their size. Usually the common name of a large muroid rodent will include the word "rat", while a smaller muroid's name will include "mouse". The common terms rat and mouse are not taxonomically specific. There are 56 known species of rats in the world. 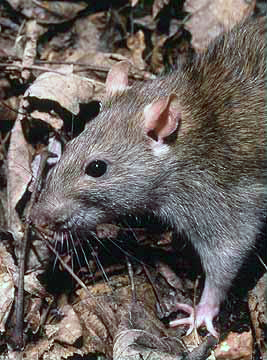 The best-known rat species are the black rat (Rattus rattus) and the brown rat (Rattus norvegicus). This group, generally known as the Old World rats or true rats, originated in Asia. Rats are bigger than most Old World mice, which are their relatives, but seldom weigh over 500 grams (17+1⁄2 oz) in the wild.

The term rat is also used in the names of other small mammals that are not true rats. Examples include the North American pack rats (aka wood rats]) and a number of species loosely called kangaroo rats. Rats such as the bandicoot rat (Bandicota bengalensis) are murine rodents related to true rats but are not members of the genus Rattus.

Male rats are called bucks; unmated females, does, pregnant or parent females, dams; and infants, kittens or pups. A group of rats is referred to as a mischief.

The common species are opportunistic survivors and often live with and near humans; therefore, they are known as commensals. They may cause substantial food losses, especially in developing countries. However, the widely distributed and problematic commensal species of rats are a minority in this diverse genus. Many species of rats are island endemics, some of which have become endangered due to habitat loss or competition with the brown, black, or Polynesian rat.

Wild rodents, including rats, can carry many different zoonotic pathogens, such as Leptospira, Toxoplasma gondii, and Campylobacter. The Black Death is traditionally believed to have been caused by the microorganism Yersinia pestis, carried by the tropical rat flea (Xenopsylla cheopis), which preyed on black rats living in European cities during the epidemic outbreaks of the Middle Ages; these rats were used as transport hosts. Another zoonotic disease linked to the rat is foot-and-mouth disease.

Rats become sexually mature at age 6 weeks, but reach social maturity at about 5 to 6 months of age. The average lifespan of rats varies by species, but many only live about a year due to predation.

The black and brown rats diverged from other Old World rats in the forests of Asia during the beginning of the Pleistocene. 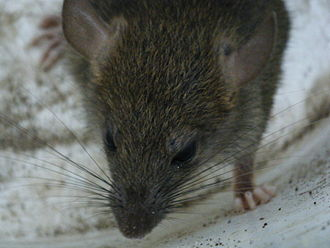 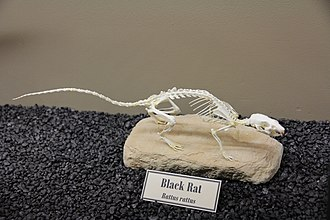 The characteristic long tail of most rodents is a feature that has been extensively studied in various rat species models, which suggest three primary functions of this structure: thermoregulation, minor proprioception, and a nocifensive-mediated degloving response.Rodent tails—particularly in rat models—have been implicated with a thermoregulation function that follows from its anatomical construction. This particular tail morphology is evident across the family Muridae, in contrast to the bushier tails of Sciuridae, the squirrel family. The tail is hairless and thin skinned but highly vascularized, thus allowing for efficient countercurrent heat exchange with the environment. The high muscular and connective tissue densities of the tail, along with ample muscle attachment sites along its plentiful caudal vertebrae, facilitate specific proprioceptive senses to help orient the rodent in a three-dimensional environment.[citation needed] Murids have evolved a unique defense mechanism termed degloving that allows for escape from predation through the loss of the outermost integumentary layer on the tail. However, this mechanism is associated with multiple pathologies that have been the subject of investigation.[citation needed]

Multiple studies have explored the thermoregulatory capacity of rodent tails by subjecting test organisms to varying levels of physical activity and quantifying heat conduction via the animals' tails. One study demonstrated a significant disparity in heat dissipation from a rat's tail relative to its abdomen. This observation was attributed to the higher proportion of vascularity in the tail, as well as its higher surface-area-to-volume ratio, which directly relates to heat's ability to dissipate via the skin. These findings were confirmed in a separate study analyzing the relationships of heat storage and mechanical efficiency in rodents that exercise in warm environments. In this study, the tail was a focal point in measuring heat accumulation and modulation.[citation needed]

On the other hand, the tail's ability to function as a proprioceptive sensor and modulator has also been investigated. As aforementioned, the tail demonstrates a high degree of muscularization and subsequent innervation that ostensibly collaborate in orienting the organism. Specifically, this is accomplished by coordinated flexion and extension of tail muscles to produce slight shifts in the organism's center of mass, orientation, etc., which ultimately assists it with achieving a state of proprioceptive balance in its environment. Further mechanobiological investigations of the constituent tendons in the tail of the rat have identified multiple factors that influence how the organism navigates its environment with this structure. A particular example is that of a study in which the morphology of these tendons is explicated in detail. Namely, cell viability tests of tendons of the rat's tail demonstrate a higher proportion of living fibroblasts that produce the collagen for these fibers. As in humans, these tendons contain a high density of golgi tendon organs that help the animal assess stretching of muscle in situ and adjust accordingly by relaying the information to higher cortical areas associated with balance, proprioception, and movement.[citation needed]

The characteristic tail of murids also displays a unique defense mechanism known as degloving in which the outer layer of the integument can be detached in order to facilitate the animal's escape from a predator. This evolutionary selective pressure has persisted despite a multitude of pathologies that can manifest upon shedding part of the tail and exposing more interior elements to the environment. Paramount among these are bacterial and viral infection, as the high density of vascular tissue within the tail becomes exposed upon avulsion or similar injury to the structure. The degloving response is a nocifensive response, meaning that it occurs when the animal is subjected to acute pain, such as when a predator snatches the organism by the tail.

Specially bred rats have been kept as pets at least since the late 19th century. Pet rats are typically variants of the species brown rat, but black rats and giant pouched rats are also sometimes kept. Pet rats behave differently from their wild counterparts depending on how many generations they have been kept as pets. Pet rats do not pose any more of a health risk than pets such as cats or dogs. Tamed rats are generally friendly and can be taught to perform selected behaviors.

Selective breeding has brought about different color and marking varieties in rats. Genetic mutations have also created different fur types, such as rex and hairless. Congenital malformation in selective breeding have created the dumbo rat, a popular pet choice due to their low, saucer-shaped ears. A breeding standard exists for rat fanciers wishing to breed and show their rat at a rat show. 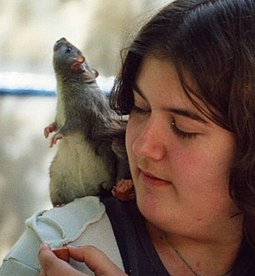 As subjects for scientific research

In 1895, Clark University in Worcester, Massachusetts, established a population of domestic albino brown rats to study the effects of diet and for other physiological studies.[citation needed] Over the years, rats have been used in many experimental studies, adding to our understanding of genetics, diseases, the effects of drugs, and other topics that have provided a great benefit for the health and wellbeing of humankind.[citation needed]

The aortic arches of the rat are among the most commonly studied in murine models due to marked anatomical homology to the human cardiovascular system. Both rat and human aortic arches exhibit subsequent branching of the brachiocephalic trunk, left common carotid artery, and left subclavian artery, as well as geometrically similar, nonplanar curvature in the aortic branches. Aortic arches studied in rats exhibit abnormalities similar to those of humans, including altered pulmonary arteries and double or absent aortic arches. Despite existing anatomical analogy in the inthrathoracic position of the heart itself, the murine model of the heart and its structures remains a valuable tool for studies of human cardiovascular conditions.

Laboratory rats have also proved valuable in psychological studies of learning and other mental processes (Barnett 2002), as well as to understand group behavior and overcrowding (with the work of John B. Calhoun on behavioral sink).[citation needed] A 2007 study found rats to possess metacognition, a mental ability previously only documented in humans and some primates.

Domestic rats differ from wild rats in many ways. They are calmer and less likely to bite; they can tolerate greater crowding; they breed earlier and produce more offspring; and their brains, livers, kidneys, adrenal glands, and hearts are smaller (Barnett 2002).

Brown rats are often used as model organisms for scientific research. Since the publication of the rat genome sequence, and other advances, such as the creation of a rat SNP chip, and the production of knockout rats, the laboratory rat has become a useful genetic tool, although not as popular as mice. When it comes to conducting tests related to intelligence, learning, and drug abuse, rats are a popular choice due to their high intelligence, ingenuity, aggressiveness, and adaptability. Their psychology seems in many ways similar to that of humans.[citation needed]

Entirely new breeds or "lines" of brown rats, such as the Wistar rat, have been bred for use in laboratories. Much of the genome of Rattus norvegicus has been sequenced. 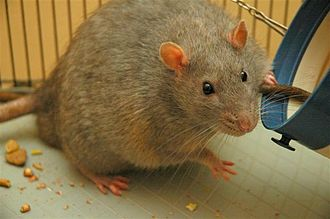 Early studies found evidence both for and against measurable intelligence using the "g factor" in rats. Part of the difficulty of understanding animal cognition generally, is determining what to measure. One aspect of intelligence is the ability to learn, which can be measured using a maze like the T-maze. Experiments done in the 1920s showed that some rats performed better than others in maze tests, and if these rats were selectively bred, their offspring also performed better, suggesting that in rats an ability to learn was heritable in some way.

Rat meat is a food that, while taboo in some cultures, is a dietary staple in others. 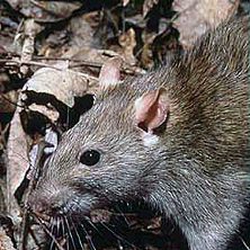 Rodent genus of the superfamily muroidea