What is quantum mechanics?

A Brief History of Quantum Mechanics - with Sean Carroll

If You Don't Understand Quantum Physics, Try This!

Quantum Mechanics and the Schrödinger Equation

Quantum mechanics is the fundamental physical theory that describes nature at the scale of atoms and subatomic particles. It underlies all quantum physics, including quantum chemistry, quantum field theory, quantum technology and quantum computer science.

Quantum mechanics differs from classical physics in that energy, momentum, angular momentum and other quantities of a coupled system cannot take arbitrary values, but are limited to discrete values (quantization), objects have characteristics of both particles and waves (particle-wave dualism), and there are limits to our ability to accurately predict the value of a physical quantity before measuring it under a given set of initial conditions (uncertainty principle).

Quantum mechanics has gradually emerged from theories explaining observations that could not be reconciled with classical physics, such as Max Planck's 1900 solution of the problem of blackbody radiation and the 1905 agreement between energy and frequency in Albert Einstein's paper, which explained the photoelectric effect. These early attempts to understand microscopic phenomena, now known as 'old quantum theory', led to the rapid development of quantum mechanics in the mid 1920s in the work of Niels Bohr, Erwin Schrödinger, Werner Heisenberg, Max Born and others. Modern theory is formulated in various specially developed mathematical formalisms. In one of them, a mathematical entity called the wave function provides information in the form of probability amplitudes about what measurements of energy, momentum and other physical properties of a particle can give. 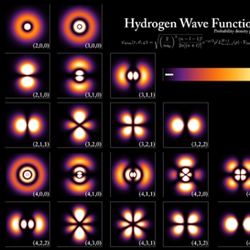