In their 2021 report, McKinsey evaluated the performance of the private equity (PE) sector as relatively strong as research had affirmed it outpaced other private market asset classes and most measures of comparable public market performance, with net global returns of over 14%. 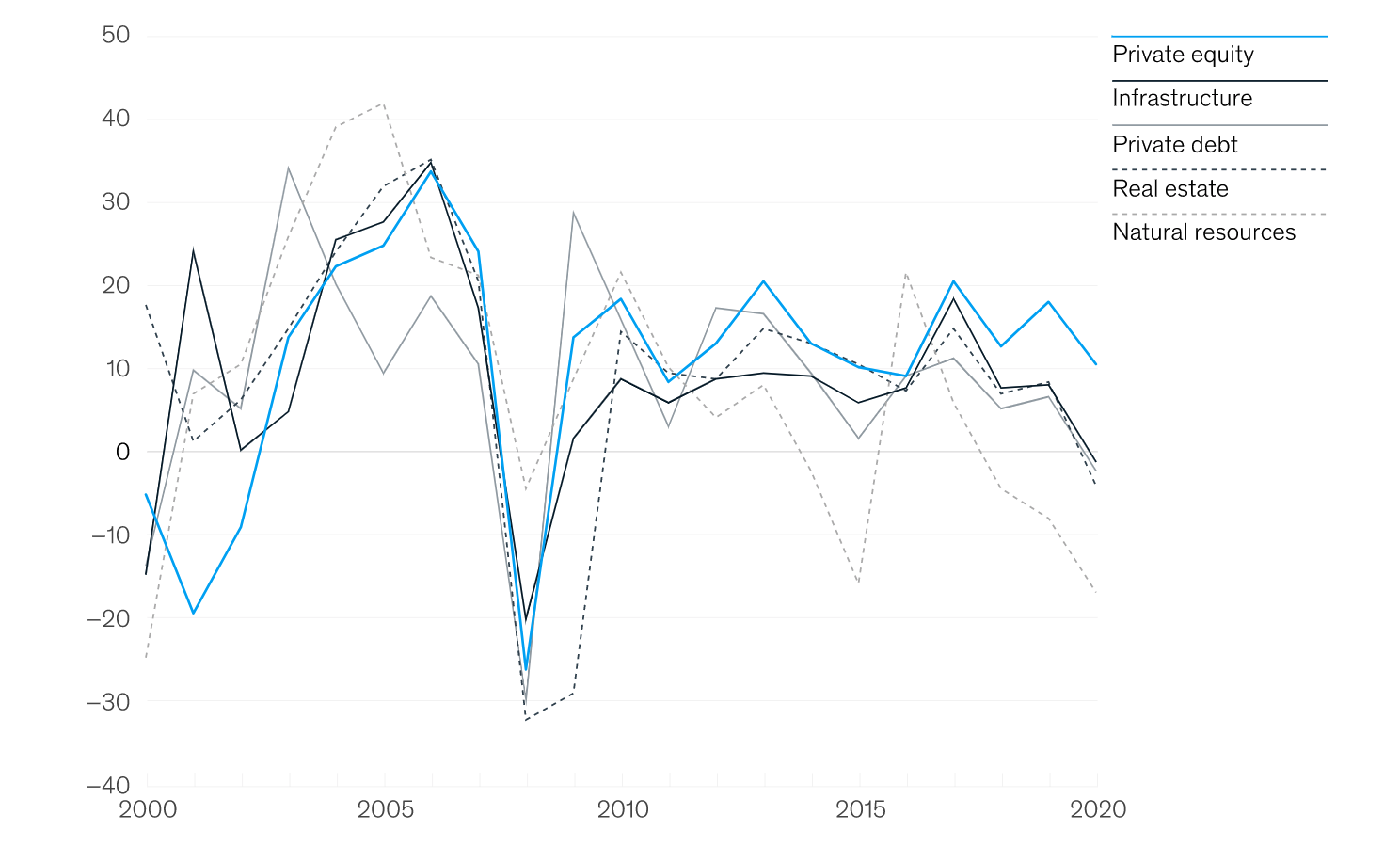 McKinsey points out that PE investors appeared to be more resilient to risk amid the COVID-19 downturn than they were during the global financial crisis (GFC) in 2008, when many limited partners (LPs) removed investments from private asset classes and subsequently missed out on economic recovery, theorizing that LPs are basing this resilience on the history of the GFC. McKinsey concluded that investor interest in PE appears relatively undiminished following the instability of 2020, compared to other asset classes.

Moreover, McKinsey asserts that 2020 was a relatively strong year for PE fundraising. The firm states that overall raised funds declined year on year due to an apparent short-term discontinuity in the early months of the pandemic, but the pre-pandemic pace of fundraising returned by the fourth quarter of the year. Growth in assets under management (AUM) and investment performance in the majority of asset classes eased off in the spring as the industry adapted to new working conditions, then saw significant growth in the latter half of the year.

McKinsey points out that in PE, fundraising growth of successor funds strongly correlates with performance of the preceding fund when fundraising is launched. However, McKinsey refutes the theory that growth in fund size correlates with degradation of performance, claiming that it does not hold up under analysis.

According to McKinsey, as of 2021, 90% of limited partners (LPs) predict that private equity will outperform public markets in coming years despite academic research that implies such outperformance has seen decline on average. Private equity purchase multiples have reached higher levels than those preceding the GFC. Alongside this growth, highly liquid marketable securities reached a new high, while debt grew cheaper and leverage increased. McKinsey judged that these factors constitute upward support for PE activity.

McKinsey also reported that fundraising for private equity secondaries saw significant growth in 2020, with the space continuing to be occupied chiefly by a few large companies. The firm speculated that continued evolution in secondaries may be pivotal in making private markets more accessible to a broader range of investors. 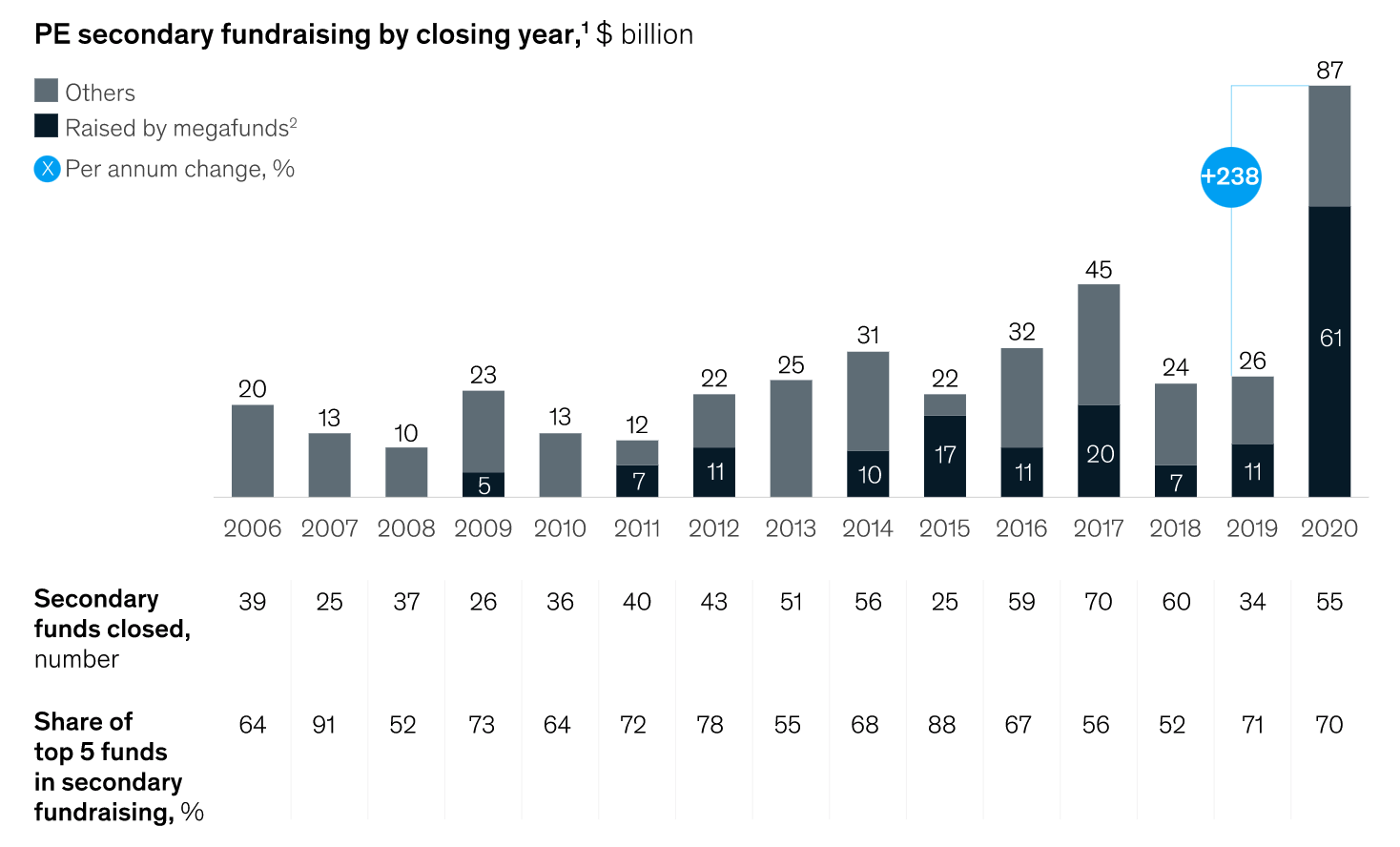 McKinsey indicated that special-purpose acquisition companies (SPACs) also underwent significant growth in 2020 as interest in the technology, healthcare, and clean-energy sectors resulted in a large number of SPAC deals. Private markets firms engaged as deal sponsors and sellers as the trend continued into 2021, with many investors being optimistic that this third wave of SPAC activity will prove more durable than those in prior market cycles.

A report by Deloitte, a global consulting firm, has projected that worldwide private equity assets under management will reach $5.8 trillion by 2025.

Harvard Law School Forum on Corporate Governance opined that private equity firms are essential for small-business growth, pointing out that following the outbreak of COVID-19, private equity firms provided guidance and assistance to the companies in their portfolios. They provided small businesses with capital and advice to help them persist through the crisis. The Forum stresses the importance of private equity firms focusing on building relationships with their employees, portfolio companies, and partners.

According to a Harvard University report, PE firms used market volatility in their favor, with many shifting their focus to companies that offered investments resistant to the effects of the COVID-19 pandemic. The report discloses that private equity-backed buyouts comprised approximately 17% of overall mergers and acquisitions activity in 2020.

A study conducted by S&P Global found that as the COVID-19 pandemic developed and influenced the market at the end of Q1 and leading into the second quarter of 2020, the PE market witnessed a sudden and strong decline in deal-making. Transactions were paused while GPs shifted their priority toward stabilizing companies already in their portfolios and ensuring that they receive operational support. As the COVID-19 situation normalized over the summer of 2020, PE investors turned their attention back to executing deals, leading the industry into a strong rebound in the second half of the year. 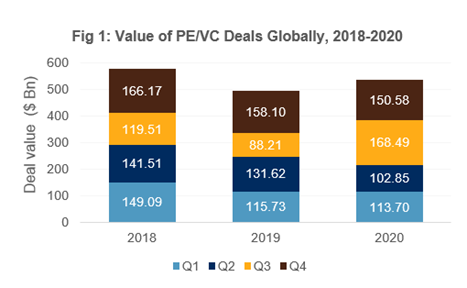 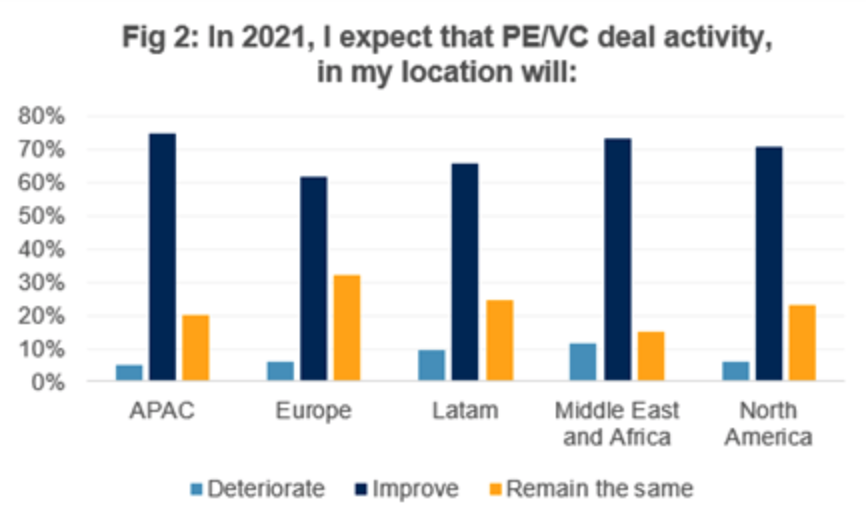 In S&P's opinion, the worldwide rollout of vaccines, the new US presidency, and fulfillment of Brexit are notable factors contributing to PE investors' overwhelmingly bullish outlook for the PE industry. The firm expects this optimism to continue for twelve or more months since the taking of the survey. Despite ongoing economic uncertainty, on average 68% of survey respondents believed investment activity will improve. Asia-Pacific (APAC) investors were found to be the most buoyant among all respondents, with three quarters of PE professionals from the region anticipating the upward trend of transaction volumes to continue.

On balance, merely 7% of those surveyed believed the investment landscape would decline in the coming months. This result had differed significantly with the result found in the 2020 survey, where almost 20% of respondents anticipated a worsening investment outlook. The 2021 results also show that while European PE players are optimistic in regards to the market, with 62% expecting deal-making conditions to improve, they also constitute the largest group (32%) of respondents who believe that investment activity will remain unchanged. This view is shared by fewer than a quarter of investors from other regions, underlining the overall sentiment that 2021 will witness steady growth.

In addition, 56% of survey respondents (up from 52% in 2020) professed that they intend to target new investment opportunities in 2021, while 20% plan to focus on managing existing investments. Only 6% of respondents anticipated selling part of their holdings in the near future. It is S&P's opinion that the combination of estimated $1.9 trillion in high-liquidity marketable securities globally, the low interest rate environment, and new opportunities arising in the market make it likely that the high competition for good assets will continue. The firm notes that in order to adapt to a prevailing market environment, PE players are adopting platform acquisition strategies to add value to their existing portfolio companies and to use capital more effectively.

Moreover, the survey results showed that more than 40% of the participating PE firms expect to incorporate buy & build and add-on investments into their core investment strategies, particularly investors in North America and Europe. In addition, minority investments in established businesses have become more popular among PE investors. The number of respondents expecting to implement a growth capital strategy grew from 36% in 2020 to 52% in 2021, as the COVID-19 pandemic exposed a large liquidity trap, as well as a number of underperforming private businesses seeking capital injections. The two most profitable sectors appeared to be Information Technology (51%) and Healthcare (43%), both of which had been positively impacted by the pandemic. According to S&P Global Market Intelligence data, PE investment in both industries grew by 18% and 23%, respectively, year-over-year.

While the consumer sector was the third most favored industry, only 30% of respondents expected to invest in the sector, a drop from the 40% recorded the year before. This shift had been observed across all regions. APAC players appeared to have the greatest interest in the sector, with nearly half of respondents planning to invest in 2021. In 2020, the total transaction value in the consumer discretionary sector, a sub-segment of the broader consumer sector, was valued at $55 billion, having undergone a decline of 23% compared with 2019. Aware of extreme changes in consumer behaviors, some of which are expected to persist, overall, PE/VC firms appeared less willing to invest in certain consumer sectors and proceeded with caution. Another notable decline in attractiveness was registered by the Industrials sector, with nearly a quarter of respondents planning to invest in the sector in the coming months; however, this figure falls considerably short of the 41% declaring to do so in the 2020 outlook.

In terms of geographical focus, the great majority of PE/VC firms (62%) surveyed were planning to concentrate their investments locally, marking a significant increase from the previous year's outlook (51%). In APAC alone, 75% of capital invested by domestic PE/VC firms was deployed locally. S&P posits that although local investing has always been the preferred and logical approach for investors, the limitations on face-to-face business interactions imposed by COVID-19, particularly due to traveling restrictions, made this option yet more viable. S&P asserts that PE/VC firms investing locally in 2021 have a competitive advantage over foreign investors as they can resort to a more established regional network for deal origination, negotiating, and the management of current portfolio companies.

S&P interprets the survey results to be illustrative of PE/VC investors' optimism about deal activity and notes that they are readying to deploy a vast amount of capital that could not be used the previous year. According to S&P, COVID-19 has led to a variety of opportunities in sectors that have been positively impacted by the pandemic, such as Healthcare Technology, Life Sciences, and Information Technology. On top of inorganic growth strategies to enhance the value of their existing portfolio, PE players are increasingly focusing on minority investments in response to growing numbers of underfinanced companies requiring liquidity injections. In addition, S&P believes that exits will be temporarily paused as deal makers attempt to assess the long-term impact of COVID-19 on certain industries and set affected businesses on a recovery path.

Bain's 2021 global private equity report indicated that the sectors that have proven most resilient to the COVID-19 pandemic have been technology (particularly enterprise software) industrial goods (including building products and packaging), financial services (particularly fintech and payments) and healthcare (especially services). According to the report, these four sectors accounted for over 65% of all transactions in 2020 and were predicted to continue to account for the majority of transactions in 2021.

Having rebounded from stagnation in Q2 2020 (North American deal value alone was off 85% from the same quarter the previous year), global industry growth accelerated in the latter half of the year, generating $592 billion in buyout deal value, constituting an 8% increase from 2019’s performance and 7% from the five-year average of $555 billion. A full $410 billion of that total came in the third and fourth quarters as GPs competed for investments.

The outbreak of COVID-19 had a pronounced negative impact on global deal count, as the number of buyouts decreased 24% to around 3,100 in 2020, from 4,100 in 2019. With the exception of the technology and telecom sectors, the number of deals fell across the business landscape compared with the five-year average. The retail, consumer, and media and entertainment sectors were among those most negatively impacted by the COVID-19 pandemic.

The broad technology sector attracted the most PE investment in 2020 (29% of total buyout deal count globally, 32% including fintech), but certain subsectors were left behind. Funds gravitated toward SaaS-based businesses such as vertical software. Gaming received a large upswing from a single deal, a $1.5 billion funding round for Epic Games led by KKR, Baillie Gifford, and BlackRock. The financial sector also drew notable private equity interest despite the general economic downturn, which, according to Bain, in the past had a significant negative impact on the sector. Subsector dynamics resulted in uneven growth across the broader sector. For instance, insurance saw little activity while the payments sector was flourishing, as per Bain's predictions from the previous year.

Bain found that the secular shift to digital payments that was already underway before the pandemic had been boosted by COVID-19, during which retailers and consumers favored the use of cards and other forms of online payment over cash. Deals involving payments companies made up 24% of total financial services/fintech investment value in 2020, up from 16% the year before. Bain expects these patterns to continue throughout 2021 as the pandemic continues to last. The firm anticipates that subsectors immune to COVID-19 and those given new momentum by the pandemic will continue to attract interest, while negatively-impacted areas such as hospitality, retail, consumer, and media and entertainment sectors will continue to suffer stagnation.