Patrizia Valduga is an Italian poet, editor, and translator. Her poems take advantage of the rigidity of traditional metres to control otherwise rebelliously sensual subject matter.

Patrizia Valduga (born May 20, 1953 in Castelfranco Veneto) is an Italian poet and translator.

She was born in Castelfranco Veneto in the province of Treviso. She studied medicine at the University of Padua, but after three years transferred to the Ca' Foscari University of Venice where she received a degree in literature. Valduga established the monthly literary magazine Poesia and served as its director for a year. She also contributed to other publications including la Repubblica.

Some of her poetry reads like theatrical monologue and several of her works have been adapted for the stage.

She has translated works by Donne, Molière, Mallarmé, Shakespeare, Kantor and Beckett into Italian.

Valduga lived with the poet Giovanni Raboni in Milan.

Patrizia Valduga established the monthly literary magazine Pocsio, which she directed for a year, in 1988, and contributed 10 various magazines and newspapers, in particular La Repubblica. She also translated a wide variety of poetic and theatrical material into Italian, including works by Shakespeare, Beckett, and Molière. Her poetry is theatrical: Donna di dolori (The Lady of Sorrow, 1991) is a proper monologue conceived to be read in pubic; in fact, it was staged by Luca Ronconiat the "Teatro Carignano" of Torino in 1992.

Valduga's body of work is vast and complex. Starting with her first collection Medicamenta (Remedies, 1982) until Lezioni d'amore (Love Lessons, 2004) - with which she breaks her 25-year commitment to the hendecasyllabic verse into the settenario - her work focuses on the relationship between the body and writing, using the finest metric forms. She chooses closed forms as a sort of indispensable cage of poetic self-psychoanalysis. The canons most used in her poetry are the rediscovered and improved tools of the great poetic tradition: sone, quatrains, madrigals, setts, octaves, and Dante's tercets. The poem La tentazione (Temptation, 1985) is composed of ten cantos of 100 hendecasyllables each, in rhymed tercets. Valduga's poetry engages in a loving dialogue with the Kalan Iyvical tradition: from Dante and the classic Petrarchan tradition to baroque post, the Jesuits, and Pascoli, Rebora, D'Annunzio. From another perspective, the influence of thinkers such as Mate Blanco, Derrida, and Kantor as wells as her formative stories with Francesco Orlando, substantiates the complex theoretical reverberations of her work.

Valduga's experimental nature uses the past, feeds on her refined cultural knowledge, and vindicates the right to "steal" verse from elsewhere and organically "repossess" them in her work. She is thus one of the most efficient interpreters of language and its crisis in modern poetry. The poetry of Patrizia Valduga is delicately peremptory: the poetic "I" is remarkably decentralized, and the meta-poets angle characteristic of most twentieth-century poetry is completely absent. Her diction is self-confident, guided by a personal and independent quest, from which transpires the impossibility of continuing to write poetry in the tradition of Eugenio Montale. Together with other significant contemporary voices, Patrizia Valduga is responsible for a drastic change in the development of contemporary Italian poetry. Her rhetorical skills, her formal work with poetry, keep her at a distance from the poet in a lyrical role. With the essay Per una definizione di "poesia" at the conclusion of Quartine: Second centuria (Quatrains: Two Hundred, 2001), Valduga articulated the progress of her poetic formation: from poetry as enchantment to poetry as a thoughtful feeling, as a means to resist, of experience death, to be exposed to the ritual of death, poetry that transforms from choral song to personal therapeutic ritual. Her works, throughout their evolution, have potential as intense and involving performances fending toward the ability to declaim and monologue. In Manfred (2003) and in Lezioni d'amore, even more than in the series Quartine, the reader is assailed by fast-paced waves of images; what is most striking is not the physical presence of bodies in the poems but rather the discovery that sounds and words are the real protagonists.

Patrizia Valduga's life partner was a poet Giovanni Raboni from 1981 to his death in 2004. 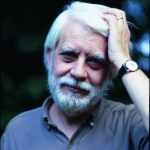 Giovanni Raboni was an Italian literary critic, translator, and poet. He is considered one of the finest and most significant Italian poets of the last half-century. Giovanni Raboni appreciated the individuality of Patrizia Valduga's voice. She wrote the afterword to his last poetry collection Ultimi versi (Last Poems), published posthumously in 2006.