Polymerase chain reaction is a method of amplifying or generating many copies of a target region of DNA. PCR reactions are normally carried out in a thermocycler which can rapidly change the temperature of the reaction which take place in 3 steps repeated many times. High temperature is applied to double-stranded DNA to separate the two strands, a process called denaturation. Lowering the temperature allows primers to bind to the template which is called the annealing step. Primers are short nucleotide sequences, single-stranded DNA, that are complementary to a region on the template DNA. In DNA adenine pairs with thymine (A-T) and cytosine pairs with guanine (C-G). Next is the extension phase where the DNA polymerase adds nucleotides onto the 3’-OH at the end of the primer. From the primer the nucleotide sequence extends as DNA polymerase adds nucleotides are complementary to the template. PCR reactions are exponential and after 35 cycles 236 copies are produced. Reverse transcription PCR (RT-PCR) is a version of PCR that detects RNA by starting with a reverse transcription step to convert RNA into a DNA copy (cDNA), followed by PCR amplification of the cDNA. 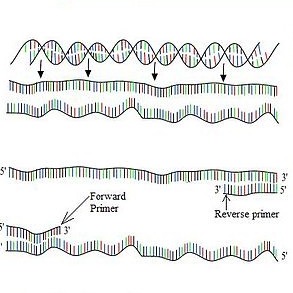 "Initial topic creation"
Meredith Hanel created this topic on 19 Oct, 2018
Edits made to: