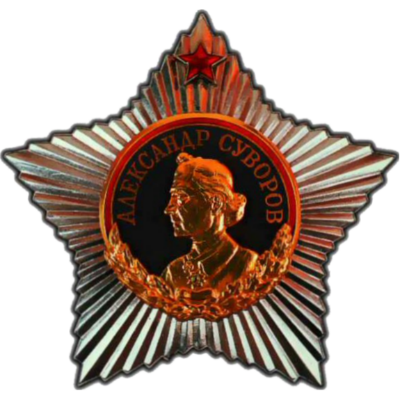 The awarding of the Order of Suvorov was carried out by Decree of the Presidium of the Supreme Soviet of the USSR. The highest degree of the order was I degree.

The Order of Suvorov was awarded to the commanders of the Red Army for outstanding successes in the management of troops, excellent organization of military operations and the determination and perseverance shown in their conduct, as a result of which a victory was achieved in the battles for the Motherland in the Patriotic War.

The badge of the Order of Suvorov I degree is a platinum convex five-pointed star, the surface of which is made in the form of diverging rays. In the middle of the star, in the rim, there is a golden circle covered with dark gray enamel with a red enamel strip in the upper part of the circle and a red enamel star in the middle of the upper ray of the star, with the inscription in the upper part around the circle in golden letters "ALEXANDER SUVOROV." The lower part of the circle is bordered by a gold laurel-oak wreath. In the center of the circle is an overhead gold polished chest relief image of Suvorov (from the engraving of 1818 by the artist Utkin N.I.).

The inscription "ALEXANDER SUVOROV" on orders of II and III degree is made with red enamel. The enamel red star in the upper beam of the star in the order of the second and third degree is absent.

The badge of the Order of Suvorov III degree is made entirely of silver. A silver circle located in the middle of the star, a relief image of Suvorov and a laurel-oak wreath at the bottom of the circle on the order are made oxidized. Silver content in the order of the third degree - 22.88 g. The total weight of the order - 25,3±1,5 g.

The second and third degrees of the order are made of a reduced size - 49 mm between the opposite vertices of the star.

The ribbon to the order is silk moire green, with longitudinal orange stripes:

The decision to establish orders specifically for awarding military leaders was made in June 1942, during the most difficult battles in the south of the USSR, when Soviet troops rolled back to the Don and Volga under German attacks, and besieged Sevastopol was already doomed. The establishment of the newly created "commander" orders took place the day after the signing of the famous order of the Supreme Commander-in-Chief No. 227 of July 28, 1942 "Not a step back!" The future successes of the Red Army commanders had to be encouraged. Therefore, they decided to move away from the system of awarding traditional for the USSR, according to which any order presented for the award could be awarded: a Red Army soldier, commander, marshal or civilian. According to the plan, new orders could be obtained only by holding the corresponding position. Initially, as a simplified version, it was proposed to establish the Order of the Red Banner with swords for these purposes. There were other options, but in the end they decided to give the new orders the names of the great commanders.