the character of Parasyte

Nobuko Izumi (泉 信子 Izumi Nobuko) is the wife of Kazuyuki Izumi and the mother of Shinichi Izumi. She was killed, decapitated and her headless corpse was taken over by a parasite that needed a female body to transfer to.

Nobuko is a fair-skinned woman with short brown hair and brown eyes. She usually wears a white shirt with a pink coat and slippers. She has a burn mark on her right hand and wrist and had sustained this injury when she saved her son, Shinichi, from getting doused with boiling hot oil in the past. When she was younger, she is shown to have longer hair.

Nobuko is a kind and attentive woman who gets emotional easily. As Shinichi's mother, she helped him many times and listens to him and Kazuyuki, her husband. She showed a lot of concern when Shinichi began to change from his experiences, eventually feeling as if he had become unrecognizable as her son. However, while Shinichi felt guilt over her scar, she didn't think it was something to fuss about.

During day-to-day life, she was slightly disgusted by her husband reading gory news about the Mincemeat Murders aloud, and startled when he commented that Shinichi probably wanted privacy to "jack off". 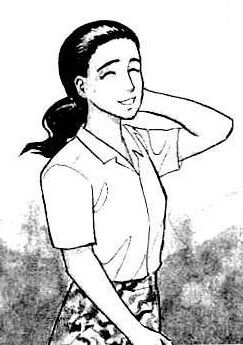