Nftfy (NFTFY) is the first decentralized protocol that allows NFT holders to split their non-fungible tokens (NFTs) without trust or permission. The sophisticated yet user-friendly Nftfy platform uses smart contracts to split digital assets into multiple ERC-20 compliant components while ensuring that each component is backed by the NFT itself.

Through crushing, you can sell a small part of your work or collection. As a side effect, you will have more people owning a portion of your NFT, ensuring NFT ownership is shared. 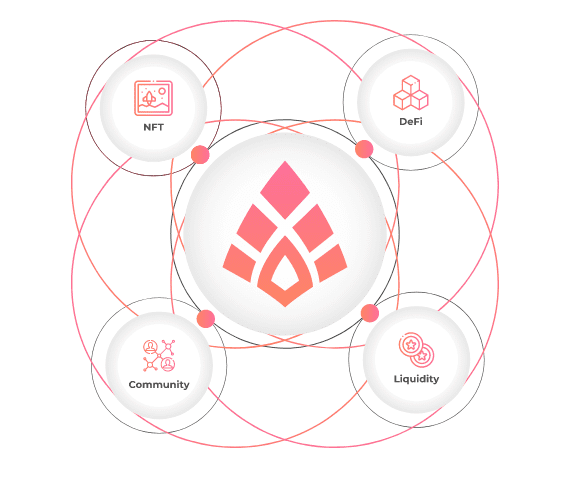 Non-fungible tokens, or NFTs, originated from an early experiment in the Bitcoin environment called Colored Coins. Colored coins showed the new potential of cryptocurrencies when they assigned an intangible value to the smallest subdivisible unit of bitcoin. They can be traded with metadata representing the real asset.

However, the Bitcoin network was never intended for this kind of business. The project was imperfect, and in 2014 an updated platform for colored coins was created, still using bitcoins. It was only after the Ethereum network was released in 2015 that the community saw a real opportunity to use non-fungible tokens.

In 2017, the popularity of NFTs skyrocketed with the advent of collectibles and the ERC-721 protocol. Sales volume during the first year was very high, up to 50,000 sales per week, which increased again during the transition period from 2019 to 2020, with a maximum of 80,000 sales per week.

Increased demand for NFTs is commonly seen during cryptocurrency bull markets, and 2021 was no exception. In the first quarter, sales rose and peaked at an average of over 40,000 per week in March. These numbers were not maintained over the following months, but began to rise again in mid-May. This month (August), sales peaked in 2021, exceeding 65,000 sales per week. 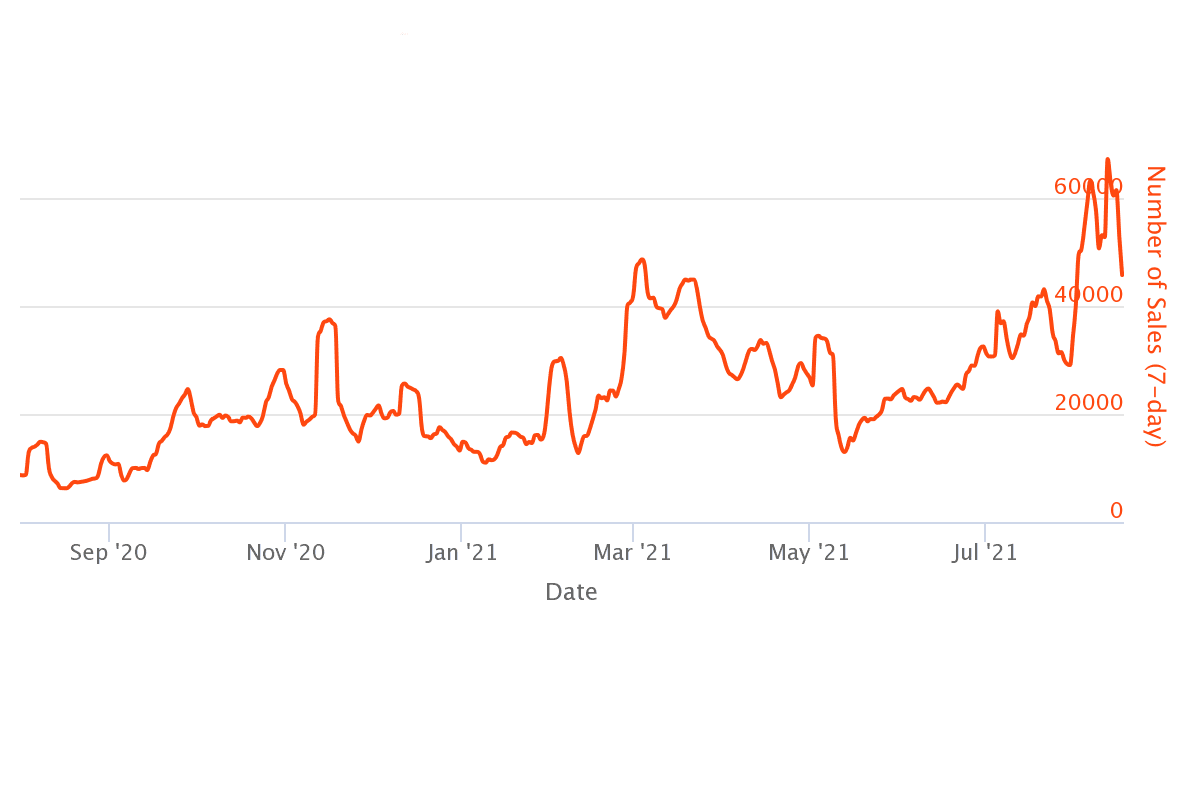 The NFT market has attracted major attention in 2021. Celebrities and influencers are buying and launching NFT products and collectibles, and artists are selling more of their creations through blockchain marketplaces. This year, on March 11, Beeple sold his work Every Day: The First 5,000 Days for the highest price ever recorded for an NFT: $69,300,000.

Nftfy (NFTFY) innovates by providing users with a decentralized, permissionless and trusted NFT co-ownership application. Our fractionation protocol opens up many opportunities for innovation in the world of crypto, expanding access to any other DeFi protocol with the same value of each NFT. 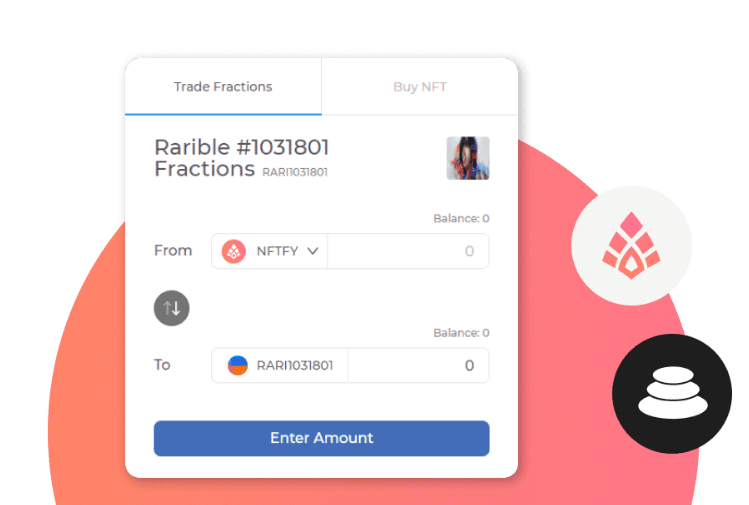 Anyone can easily generate and run interchangeable factions fully supported by NFTs, with clear and simple rules to ensure flawless and independent operation. Nftfy empowers the NFT ecosystem by increasing liquidity and, as a result, the ability to attract new investments and innovations, which is considered significant progress for a decentralized world.

Here's how it works:

The complete workflow is divided into three steps: Fractionation, Redemption, and Claim.

After connecting the wallet to the platform and selecting the NFT to split, you will set:

-The number of fractions you want to generate (currently fixed at 1,000,000 fractions).

-The exit price, i.e. the price someone has to pay to extract the NFT. You set the value and define the cryptocurrency (ETH, DAI or any other ERC20 token).

Once a transaction has been approved on the main network:

-The NFT is transferred from your wallet and the bet is now placed on the newly created individual contract.

There is now only one way to extract NFTs from a contract: the redemption process.

In order to withdraw NFT from the contract, you will need to pay the full cost of the exit. You can do this by paying for the contract with fractions and the chosen cryptocurrency, pre-determined during the fractionation process. 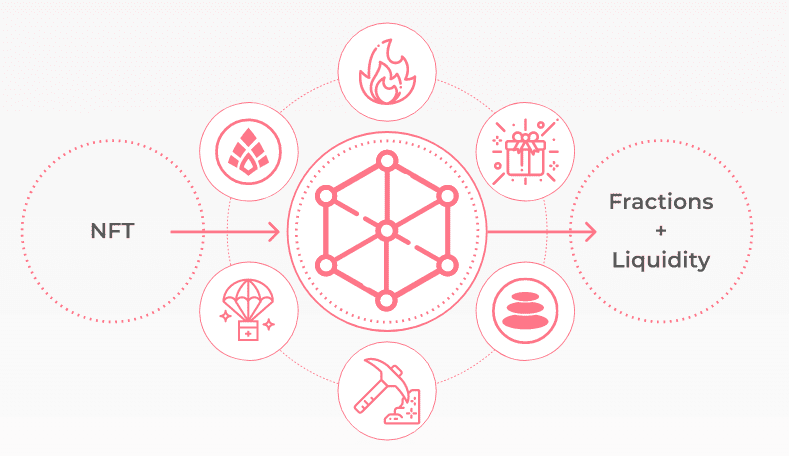 The amount paid will be stored in the smart contract storage.

For example, you can pay 20% in fractions and 80% in coins. Once you confirm the redemption, you will receive NFTs in your wallet.

In this case, the other remaining factions are no longer supported by the NFT. Now they are backed by the amount stored in the Vault. Users who still own factions can claim the prorated amount paid by the redeemer.

If someone redeemed an NFT and you still have shares of that NFT, you can exchange them for a proportional number of coins stored in the contract vault.

The application process is the easiest one where you just have to click on the "Claim" button to get what is rightfully yours. 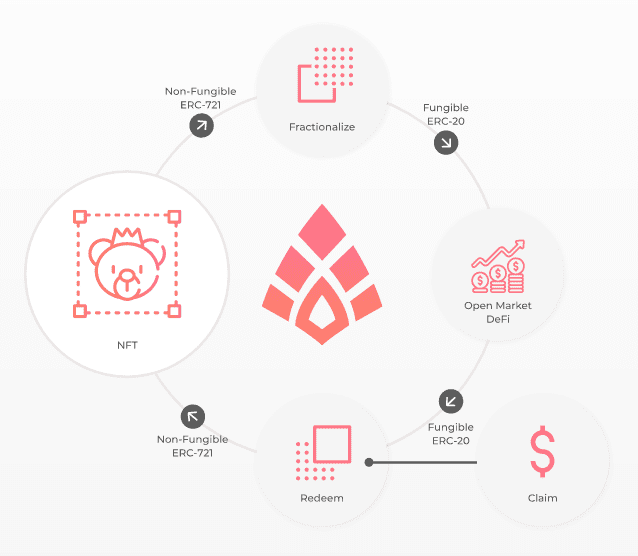 The Nftfy Marketplace is an environment to launch and trade ERC20 compliant factions. This is a user-friendly interface for creating and interacting with NFT factions, NFTs and liquidity pools. 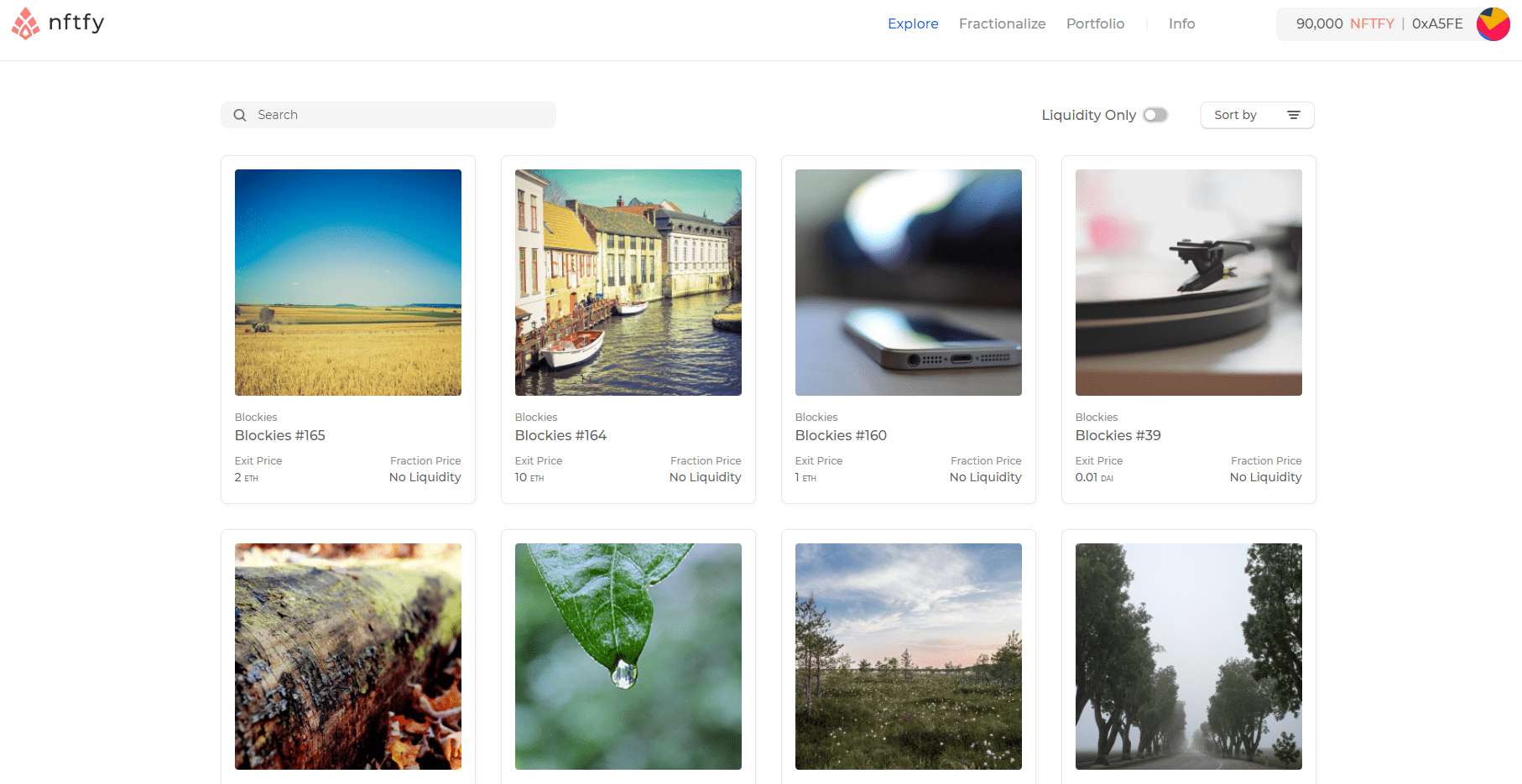 All pools consisting of $NFTFY and any other tokens on the balancer will be eligible to participate in the Liquidity Mining and Rewards programs. In addition, incentive pools can receive certain farm from the DAO treasury.

The $NFTFY tokens and their distribution mechanism were created to drive the growth of tokenomics and the overall value supply, providing liquidity and stability to the Nftfy ecosystem.

As many new ERC20s circulate in the DeFi market, the $NFTFY token acts as a liquidity base (collateral) for these new factions seeking to gain recognition in liquidity pools. Each pool created must have $NFTFY in it in order to participate in our reward mechanisms and be listed in the "Pools" section.

100,000,000 NFTFY tokens will be issued over six years with the following distribution: 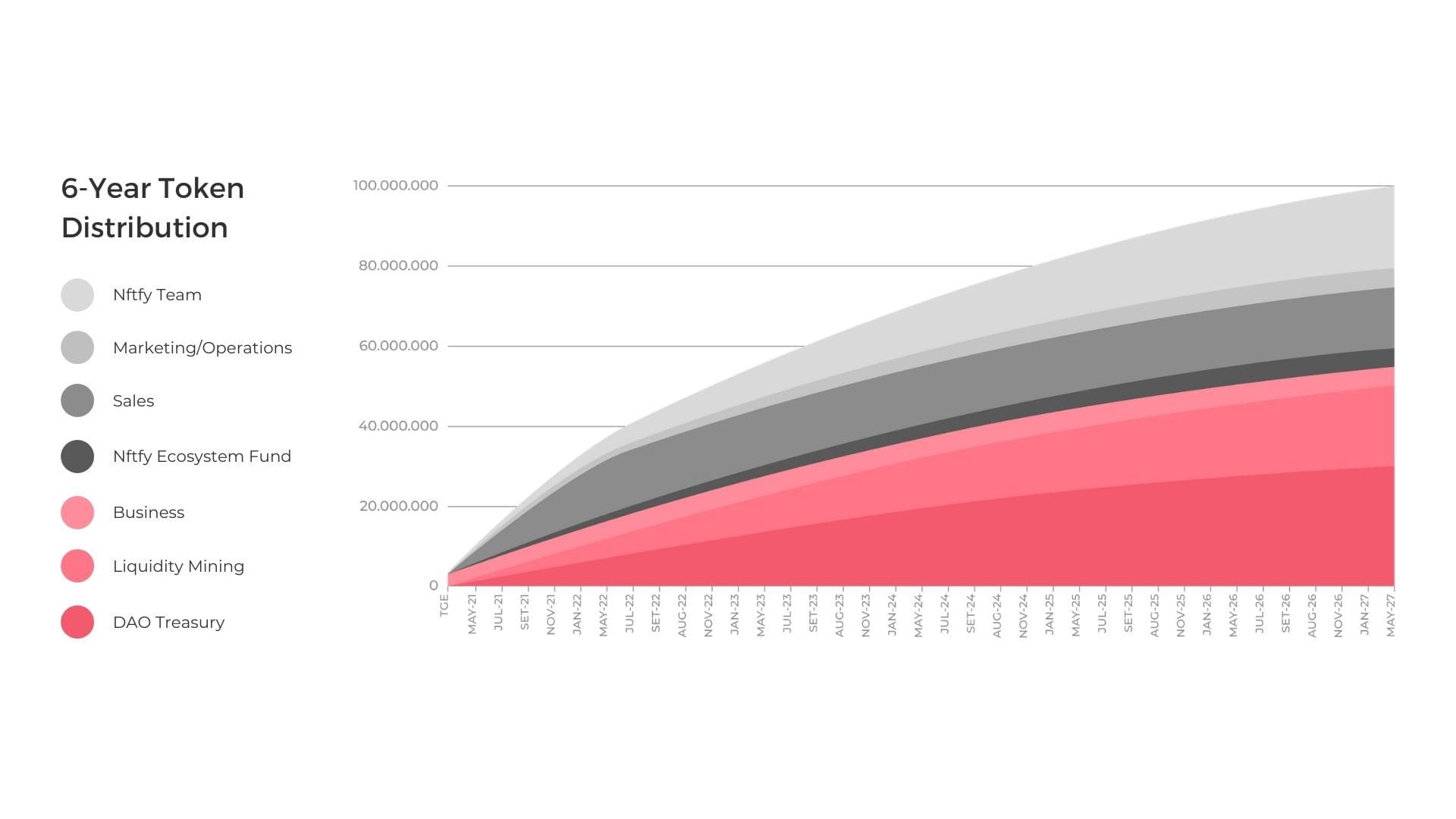 Nftfy tokenomics is set to attract liquidity to user-issued factions and exclude unscrupulous agents. The complete process of tokenomics consists of:

-Creation of fractions according to the Nftfy protocol.

-Launching tokens through liquidity pools on a balancer (on Ethereum).

-DAO Treasury as a public holding.

Nftfy is the new building block for DeFi and is the missing piece to connect the NFT and DeFi ecosystems. The protocol is completely decentralized, in addition to being open source, making it verifiable by anyone.

Decentralized fractionalization is the new DeFi primitive. Thus, many new applications can be developed and deployed with Nftfy. 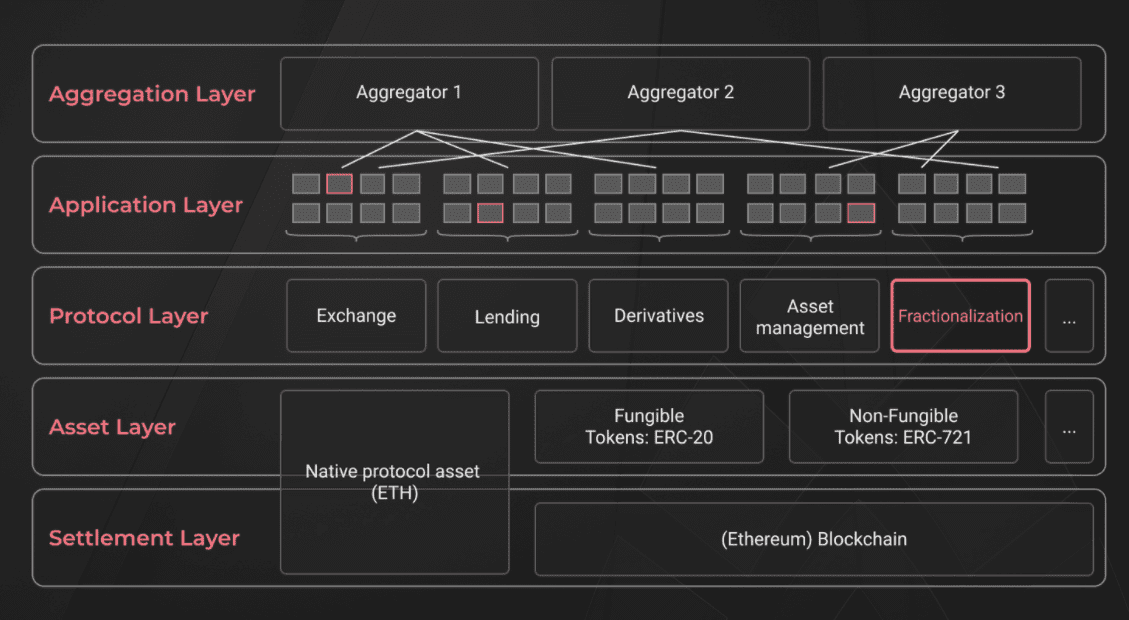