Animal of the "higher primates" (the simians), but excluding the apes

Monkey is a common name that may refer to most mammals of the infraorder Simiiformes, also known as the simians. Traditionally, all animals in the group now known as simians are counted as monkeys except the apes, a grouping known as paraphyletic; however in the broader sense based on cladistics, apes (Hominoidea) are also included, making the terms monkeys and simians synonyms in regard of their scope. Monkeys are divided into the families of New World monkeys (Platyrrhini) and Old World monkeys (Cercopithecidae in the strict sense; Catarrhini in the broad sense, which again includes apes). 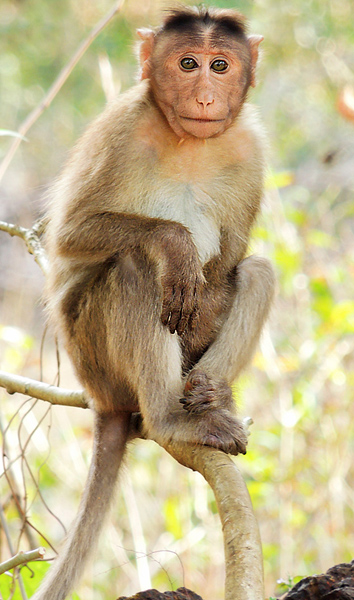 Many monkey species are tree-dwelling (arboreal), although there are species that live primarily on the ground, such as baboons. Most species are mainly active during the day (diurnal). Monkeys are generally considered to be intelligent, especially the Old World monkeys.

Apes emerged within "monkeys" as sister of the Cercopithecidae in the Catarrhini, so cladistically they are monkeys as well. There has been resistance to directly designate apes (and thus humans) as monkeys, so "Old World monkey" may be taken to mean either the Cercopithecoidea (not including apes) or the Catarrhini (including apes).That apes are monkeys was already realized by Georges-Louis Leclerc, Comte de Buffon in the 18th century.

Monkeys, including apes, can be distinguished from other primates by having only two pectoral nipples, a pendulous penis, and a lack of sensory whiskers.

According to the Online Etymology Dictionary, the word "monkey" may originate in a German version of the Reynard the Fox fable, published circa 1580. In this version of the fable, a character named Moneke is the son of Martin the Ape. In English, no clear distinction was originally made between "ape" and "monkey"; thus the 1911 Encyclopædia Britannica entry for "ape" notes that it is either a synonym for "monkey" or is used to mean a tailless humanlike primate. Colloquially, the terms "monkey" and "ape" are widely used interchangeably. Also, a few monkey species have the word "ape" in their common name, such as the Barbary ape.

Later in the first half of the 20th century, the idea developed that there were trends in primate evolution and that the living members of the order could be arranged in a series, leading through "monkeys" and "apes" to humans. Monkeys thus constituted a "grade" on the path to humans and were distinguished from "apes".

Scientific classifications are now more often based on monophyletic groups, that is groups consisting of all the descendants of a common ancestor. The New World monkeys and the Old World monkeys are each monophyletic groups, but their combination was not, since it excluded hominoids (apes and humans). Thus, the term "monkey" no longer referred to a recognized scientific taxon. The smallest accepted taxon which contains all the monkeys is the infraorder Simiiformes, or simians. However this also contains the hominoids, so that monkeys are, in terms of currently recognized taxa, non-hominoid simians. Colloquially and pop-culturally, the term is ambiguous and sometimes monkey includes non-human hominoids. In addition, frequent arguments are made for a monophyletic usage of the word "monkey" from the perspective that usage should reflect cladistics.

A group of monkeys may be commonly referred to as a tribe or a troop.

Two separate groups of primates are referred to as "monkeys": New World monkeys (platyrrhines) from South and Central America and Old World monkeys (catarrhines in the superfamily Cercopithecoidea) from Africa and Asia. Apes (hominoids)—consisting of gibbons, orangutans, gorillas, chimpanzees, and humans—are also catarrhines but were classically distinguished from monkeys.Tailless monkeys may be called "apes", incorrectly according to modern usage; thus the tailless Barbary macaque is historically called the "Barbary ape".

As apes have emerged in the monkey group as sister of the old world monkeys, characteristics that describe monkeys are generally shared by apes as well. Williams et al outlined evolutionary features, including in stem groupings, contrasted against the other primates such as the tarsiers and the lemuriformes.

Monkeys range in size from the pygmy marmoset, which can be as small as 117 millimetres (4.6 in) with a 172-millimetre (6.8 in) tail and just over 100 grams (3.5 oz) in weight, to the male mandrill, almost 1 metre (3.3 ft) long and weighing up to 36 kilograms (79 lb). Some are arboreal (living in trees) while others live on the savanna; diets differ among the various species but may contain any of the following: fruit, leaves, seeds, nuts, flowers, eggs and small animals (including insects and spiders).

Monkeys and Monkey Gods in Mythology, Folklore, and Religion.