Monastery of the Holy Apostles Peter and Paul (Drohobych)

Church and Monastery of the Holy Apostles Peter and Paul is a monastery of the Basilian Order of St. Jehoshaphat of the Ukrainian Greek Catholic Church in the town of Drohobych in the Lviv region . He belongs to the Drohobych Deanery of the Sambir-Drohobych Eparchy of the UGCC.

The monastery is a significant spiritual center, one of the most magnificent examples of sacred architecture of the city ​​and the country of the XIX century , a historical and architectural monument.
The majestic brick church with a complex of monastery buildings is located in the center of Drohobych, at 1 Stryjska Street .
History
The Basilian Monastery of the Holy Apostles Peter and Paul in Drohobych is the successor and successor of the first monasteries of the Basilian Fathers in the Drohobych region, which defended the traditional Ukrainian Greek Catholic Church - in the villages of Derezhychi , Lishnya and Letnya . After the Derzhychiv Monastery burned down on Easter just in 1758 , the monks finally decided to build one large monastery. The first division of the Rzeczpospolita ( 1772 ) prevented the realization of the idea .
In Austria , on December 31, 1774 , Archpriest Father Onufriy Bratkovsky received permission from the Empress Maria Theresa to build a Basilian monastery near Drohobych, but subject to the liquidation of three existing monasteries. Therefore, having collected the necessary funds, the Basilian fathers bought a plot of land from the suburban Vasyl Ortynsky, on which they undertook the construction of the future shrine. The work was supervised by the newly appointed first abbot of the not yet built monastery - Father Glykeriy Dubytsky. In 3 years the construction of the wooden monastery and the church of Peter and Paul was completed. However, this original building of the monastery has not survived, because it was wooden, and in 1825 burned to the ground in a fire. Almost all church property was destroyed, only the altar and a few icons were saved . Since, unfortunately, no image of the monastery has survived, now no one can say for sure what the original monastery building looked like. 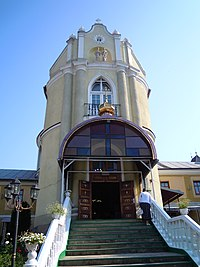 Church of Peter and Paul Drohobych

Abbot Josaphat Kachanowski again received permission from the Austrian government to build a new monastery, this time a brick one. And again the construction work lasted 3 years. The work was completed in 1828 . The next 3 years were devoted to interior decoration - interior painting and artwork. The consecration of the church took place in 1831 , on the day of the holy martyr Jehoshaphat, in honor of which the church in addition to the name of St. Apostles Peter and Paul, received the additional name of the holy martyr Jehoshaphat .
In the early 1930s, the monastery was closed for renovation, and the monks moved to the former Holy Trinity Monastery. For some time the premises of the shrine were rented by a paid city hospital. Later, he was hired by private individuals, including a well-known lawyer, public and political figure, the head of Drohobych 's Prosvita , and the future president of the Ukrainian People's Republic in exile, Stepan Vytvytsky .
The renovated church was consecrated on December 4, 1934 by Bishop Josaphat Kotsilowski of Peremyshl .
Prison on Stryjska
But already in 1939 , after the entry of the western Ukrainian lands into the Ukrainian SSR , mass repressions and persecutions of the UGCC and ordinary believers began . An NKVD torture chamber was opened next to the church , in which many monks and other people were brutally tortured.
Such martyrs were Severian Baranyk , Yakim Senkivsky and Vitaliy Bayrak , who gave their lives for their faith in God. During the independence of Ukraine, on June 27, 2001 , during the visit of Pope John Paul II , they were declared blessed.
Read more: Drohobych Martyrs
In 1944, a crossing point was opened on the territory of the monastery for the repressed inhabitants of Drohobych. After the liquidation of the Drohobych region in 1959, the church was transferred to the Pedagogical Institute and served as a student club for dancing and other entertainment. Laboratories were located in the monastery.
Restoration of the monastery
Since 1990 and in independent Ukraine, the Basilian Monastery of the Holy Apostles Peter and Paul in Drohobych has resumed its activities.
On February 5, 2011, the Vakamenari youth creative center was established within the monastery, which later, together with a part of the School of Christian Animator, created a group of creative youth (GTM) "Youngsoul" (Young Soul).
On April 17, 2012 , the territory of the monastery became one of the sites of the city, where on the third day of the Easter holidays Velyka Haivka was held .
Gallery

fragment of the monastery building

iconostasis in the church 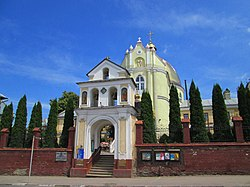 Church of the Holy Apostles Peter and Paul

Contacts - Church and monastery of Sts. app. Peter and Paul in Drohobych

Monastery of the Holy Apostles Peter and Paul (Drohobych)
Subsidiary

Monastery of the Holy Apostles Peter and Paul (Drohobych)