In late 306, Maximian took the title of Augustus again and aided his son, Maxentius, and his rebellion in Italy. In April 307, he attempted to depose his son, but failed and fled to the court of Constantius' successor, Constantine (Maximian's step-grandson and son-in-law), in Trier. At the Council of Carnuntum in November 308, Diocletian and his successor, Galerius, forced Maximian to renounce his imperial claim again. In early 310, Maximian attempted to seize Constantine's title while the emperor was on campaign on the Rhine. Few supported him, and he was captured by Constantine in Marseille. Maximian killed himself in mid-310 on Constantine's orders. During Constantine's war with Maxentius, Maximian's image was purged from all public places. However, after Constantine ousted and killed Maxentius, Maximian's image was rehabilitated, and he was deified.

The man he appointed to police the Channel shores, Carausius, rebelled in 286, causing the secession of Britain and northwestern Gaul. Maximian failed to oust Carausius, and his invasion fleet was destroyed by storms in 289 or 290. Maximian's subordinate, Constantius, campaigned against Carausius' successor, Allectus, while Maximian held the Rhine frontier. The rebel leader was ousted in 296, and Maximian moved south to combat piracy near Hispania and Berber incursions in Mauretania. When these campaigns concluded in 298, he departed for Italy, where he lived in comfort until 305. At Diocletian's behest, Maximian abdicated on 1 May 305, gave the Augustan office to Constantius, and retired to southern Italy.

Maximian (Latin: Marcus Aurelius Valerius Maximianus; c. 250 – c. July 310), nicknamed Herculius,[8] was Roman emperor from 286 to 305. He was Caesar[3][4] from 285 to 286, then Augustus from 286[1] to 305.[2] He shared the latter title with his co-emperor and superior, Diocletian, whose political brain complemented Maximian's military brawn. Maximian established his residence at Trier but spent most of his time on campaign. In late 285, he suppressed rebels in Gaul known as the Bagaudae. From 285 to 288, he fought against Germanic tribes along the Rhine frontier. Together with Diocletian, he launched a scorched earth campaign deep into Alamannic territory in 288, temporarily relieving the Rhine provinces from the threat of Germanic invasion. 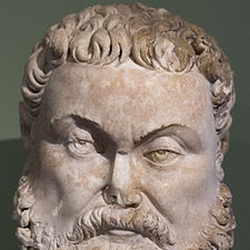