Mixture of molten or semi-molten rock, volatiles and solids that is found beneath the surface of the earth

Minerals associated with magma. M. is the carrier of mn. useful components, which in the process of its crystallization are concentrated in separate areas, creating endogenous deposits. Some ore minerals (minerals Cr, Ti, Ni, Pt), as well as apatite, are absorbed during the crystallization of M. and form magmatic deposits in stratified complexes. It is believed that at the last stages of the formation of intrusions (the post-magmatic stage), hydrothermal, greisen, skarn, etc. are formed due to the volatile components contained in the M. deposits of non-ferrous, rare and precious metals, as well as some iron deposits.

The connection is established between the main concentrations of ores of rare alkali metals, boron, beryllium, rare earths, tungsten and other rare elements with derivatives of granite M., ores of chalcophilic elements - with basalt magma, and chromium, diamonds, etc. - with ultramafic M. See Magmatic observations.

To determine the course of the evolution of M., the sequence of mineral extraction during crystallization by the German petrograph K. G. Rosenbush and Amer is important. petrographer N. Bowen developed a scheme according to which, during the crystallization of M., rare (accessory) minerals are always isolated first, followed by magnesia-ferruginous silicates and basic plagioclases, followed by hornblende and medium plagioclases, and at the end of the process biotite, alkaline feldspar and quartz are formed. In the main M . the same law determines the usual precipitation of olivine first, pyroxenes later, and amphiboles and mica only at the end. However, there is no universal sequence of crystallization of M. This is consistent with the concepts of M. as a complex solution, where the precipitation of solid phases is determined by the law of acting masses and the solubility of the components. Therefore, in the soil rich in aluminosilicate and alkaline components, feldspars are released earlier than dark-colored minerals (in granites). In highly supersaturated silica rocks, quartz (quartz porphyry) is often the first to be released. Even in M. of one composition , the order of crystallization varies depending on the content of volatile components in them .

Initially, it was assumed that magmatic differentiation and interaction with host rocks (assimilation, contamination) lead to a variety of M. Now these processes are more often explained by the details of the structure of individual arrays of igneous rocks, the banded structure of intrusive bodies, differences in the composition of lavas simultaneously pouring out of the volcano at different hypsometrics. levels, and the change of compositions of lavas pouring out of the volcano.

The crystallization differentiation is due to the fact that the minerals released in the initial stages of solidification are different in specific gravity from the melt. This leads to the surfacing of one part of them (e.g., plagioclase crystals in diabases of the Kola Peninsula) and the lowering of the other (e.g., olivine and augite in the basalts of N. Scotland). As a result, rocks of various compositions are formed in the vertical section of the magmatic body. It is possible to change the composition of M. when the residual liquid is squeezed out of the released crystals and as a result of the interaction of M. with the host rocks.

M. of different composition have different physical properties. the properties, which also depend on the temperature and content of volatile components. M. basalt composition is characterized by reduced viscosity, and the lava flows formed by it are very mobile. The speed of movement of such flows sometimes reaches 30 km / h. M. acidic composition is usually more viscous, especially after the loss of volatile. In the vents of volcanoes, it forms extrusive domes, less often - streams. Explosive eruptions with the formation of powerful thicknesses of ignimbrites (see Ignimbrite) are characteristic of acidic M., rich in volatile. In intrusive conditions, while maintaining volatile, acidic M. it is more mobile and can form thin dikes. The tempo of M. varies widely. Determination of the temperature of lavas in modern volcanoes showed that it varies from 900 to 1200 °C. According to experimental data, granite (eutectic) M. remains liquid up to about 600 ° C.

Initially, it was believed that M. forms solid shells in the bowels of the Earth. With the help of geophysics. studies have proved that there are no permanent shells of liquid M., that M. periodically forms an otd. foci within the different composition and depth of the shells of the Earth.

In the early 70s, based on the results of a large number of experimental studies, it was assumed that granite M. is formed in the earth's crust and upper mantle, and the main M. is probably in the asthenosphere due to the release of relatively fusible material. In addition to granite and basalt M., the existence of other, rarer, local m. is allowed, but their nature is not yet clear. It is assumed that the occurrence of M. is favored by a local rise in temperature (heating of the subsurface); it is allowed to introduce fluxes (water, alkalis, etc.) and a drop in pressure.

Intensive experimental studies are being conducted in the USSR, USA, Japan, and Australia to study the conditions for the formation of melts close to M. Geophysics data are of great importance for elucidating the nature of M. studies on the state of the Earth's crust and upper mantle (in particular, on the temp-pax of the Earth's depths).

Magmatic. breeds of close age and chemical. compositions formed from a single initial magmatic melt (comagmatic rocks) are often distributed in zones with a length of thousands of km. And magmatic. the rocks of each such zone (or province) are characterized by an increased or decreased content of k-l. oxide (e.g., Na or K) and characteristic metallogeny. On the basis of this, the existence of magmatic was assumed. pools of enormous size for entire geologic periods. epochs for tens of millions of years. According to others . according to the ideas, the reason for such uniformity lies in the proximity of the compositions of the source rocks, as well as the temp-p and pressures at which the smelting takes place.

Types of magma. Having studied the distribution of various magmatic. rocks on the surface of the Earth and showing preim. the distribution of basalts and granites, the Soviet geologist F. Y. Levinson-Lessing suggested that all known magmatic. the rocks were formed due to two ancestral rocks: basic (basalt), rich in Mg, Fe and Ca with a SiO2 content of 40 to 55 weight% and acidic (granite), rich in alkali metals, containing 65 to 78% SiO2. English, geologist A. Holmes hypothesized the presence, along with basic and acidic M. also ultrabasic (peridotite) M., ejected directly from subcortical foci, containing less than 40% SiO2 and enriched with Mg and Fe. Later, when in the late 20s of the 20th century it was found that volcanoes pour out the main mass (lava), and acidic rocks are found only in the form of intrusive formations, amer. petrologist N. Bowen hypothesized the existence of only one ancestral M. - basalt, and explained the formation of granites as a result of crystallization differentiation of basalt M. in the process of its solidification. At the end of the 50s, N. Bowen proved the possibility of the existence of granite rock under conditions of high pressures, the presence of water (2-4%), at a temperature of about 600 ° C.

In volcanic areas, when reaching the earth's surface, it pours out in the form of lava, forms extrusive bodies in the vents of volcanoes or is ejected with gases in the form of fragmented material. The latter, mixed with fragments of lateral rocks and sedimentary material, is deposited in the form of various tuffs.

Magmatic. the masses that solidify at depth form intrusive bodies of various shapes and sizes - from small cracks made by magma to huge massifs with areas in horizontal section up to many thousand km2. When M. is introduced into the Earth's crust or when it is poured onto the Earth's surface, igneous rocks are formed, which give an idea of its composition.

MAGMA (from the Greek magma - thick ointment), a molten mass of preim. silicate composition formed in the deep zones of the Earth. Usually M. is a complex mutual solution of compounds of a large number of chemical elements, among which oxygen, Si, Al, Fe, Mg, Ca, Na and K. predominate. Sometimes up to several percent of volatile components, mainly water, are dissolved in M. Less - oxides of carbon, hydrogen sulfide, hydrogen, fluorine, chlorine, etc. Volatile components during the crystallization of M. at depth are partially included in the composition of various minerals (amphiboles, micas, etc.). In rare cases, magmatic is noted. melts of non-silicate composition, for example, alkaline-carbonate (volcanoes of East Africa) or sulfide.

Golden AI edited on 29 Mar, 2021
Edits made to:
Infobox (+1 properties)
Infobox
Invested in

Golden AI edited on 29 Mar, 2021
Edits made to:
Infobox (+1 properties)
Infobox
Invested in 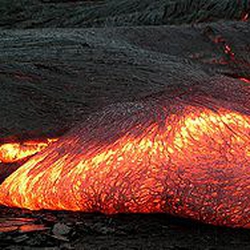 Mixture of molten or semi-molten rock, volatiles and solids that is found beneath the surface of the earth