Madrid is the capital and largest city of Spain, as well as the administrative center of the province and autonomous community of the same name. The municipality is part of the Area Metropolitan Area (comarca). The largest economic, political and cultural center of the country. The population of the city is 3,266 million inhabitants (2019).

The city is located in the central part of the Iberian Peninsula. Greater Madrid is an agglomeration with an area of 1200 km2. The city itself is located on an area of 607 km2 and includes 21 administrative districts. A major transport hub (railways, high-speed highways, one of the world's largest airports).

Madrid is an influential cultural center, which houses many museums of international scale, including the Prado Museum, the Reina Sofia Art Center, the Thyssen—Bornemisza Museum and the Madrid Forum, which are among the hundred most visited museums in the world. 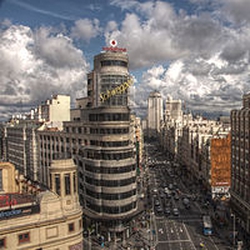