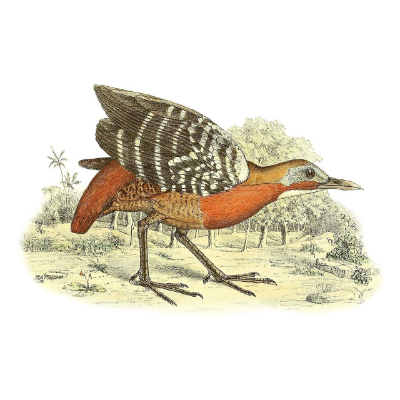 The plumage of birds is chestnut and olive brown. The anterior part of the head, the region around the eyes and the ear coverts are colored gray; a large white spot on the throat, often with black spots along the contour; the top of the head and most of the back are olive brown, while the lower back down to the tail is chestnut. The primary and secondary flight feathers , as well as the wing coverts, are blackish, with white stripes on the inside of the feather, while the cover feathers above the wing are colored chestnut, light chestnut or olive. The plumage of the chest, neck and upper abdomen is chestnut, dark brown in the lower part and on the sides, with whitish or light gray-green stripes on the feathers. From a distance, the light plumage of the head often looks like a white mask. iristhe eyes are brown, the beak is blackish, gray-blue at the end and along the edges. There is no sexual dimorphism in plumage coloration . Young birds have a less bright plumage compared to adults, the gray color on the head is less pronounced, and yellow spots are clearly visible on the covert feathers of the tail . The molting of adult birds occurs in May-July, and the change of plumage of young birds occurs in January .

Compared to the nominate subspecies, the subspecies M. k. berliozi is slightly larger and paler in plumage. The gray spot on the forehead is wider (goes beyond the eyes), and the white on the throat, on the contrary, is more elongated, the plumage is painted in a pale greenish-olive color from above . In addition, in the subspecies M. k. berliozi has a stronger and longer beak than the nominate. Young birds show the same distinctive features . Differences in the color of the plumage of subspecies are more noticeable than in the size of birds . Exploring a new species of Mentocrex beankaensis, scientists also drew attention to three museum specimens of adult birds of a smaller size, found in the extreme southeast of the island in the regions of Bemangidy ( Bemangidy ) and Eminimini ( Eminiminy ). They had a noticeably smaller beak and wings, and the coloration of the lower part of the feathers was more intense. The conducted molecular studies did not show sufficient differences to distinguish these birds into a separate subspecies .

The Madagascan grey-throated shepherd (Dryolimnas cuvieri) differs from the Cuvier shepherd ( Dryolimnas cuvieri ) living in the same territory in smaller sizes, a different color of the plumage of the head and upper body, a dark undertail and a short beak [3] . The West African Grey-throated Shepherd [en] ( Canirallus oculeus ), which has long been considered related to the Madagascar Grey-throated Shepherd, is larger, has a white or gray throat patch without black spots around the edges, and white stripes on flight and covert feathers; the beak is green or yellow-green, with a black tip .

Specialists easily identify birds by their main call , which is a series of loud shrill whistles with ascending modulations. When feeding, Madagascar grey-throated shepherds constantly emit a muffled wheezing, reminiscent of one of the signals of the brown lemur ( Lemur fulvus ) - a very short sharp metallic call "nak", turning into a ratchet towards the end. They can also make a muffled "bub" and a sharp cackle . Birds respond to the playback of the recording of their main call, but with frequent use of this technique, they do so less and less .

"Created via: Web app"
Ivan Amelchenko created this topic on 3 Feb, 2022
Edits made to:
Infobox (+1 properties)