The band made its debut on 1 April 2013, releasing their first video "Every Day I'm Drinking". They made their first public appearance on 2 July 2013 at the club A2, opening for Die Antwoord.

They have toured in Europe, Russia, and North America. "This music is really in demand. We have not invested a single penny, just shot video, and became known in Europe", Ilya Prusikin said in an interview with UTV.

"We just want to show people that they own their lives. Countries and governments are not as important as they think, a person can deal with what he wants", said frontman Ilya Prusikin on the purpose of the band in an interview with Noisey.

In April 2018 Olympia Ivleva decided to leave the band. Later that year she stated her "burnout after five years of doing the same job", combined with intention to start her own non-musical businesses (chocolate paste and lingerie), were the reasons behind her exit.

Little Big achieved viral success with the release of the video for "Skibidi" on 6 October 2018. The video features a dance that became popular when others tried to imitate it as part of the "Skibidi Challenge".

In March 2020, Little Big were announced as Russia's entry for the Eurovision Song Contest 2020, where they would have performed "Uno". The music video for the song, released at the same time, features Yuri Muzychenko from The Hatters and Florida Chanturia from Leningrad, both of whom were to join the band on stage during the contest. However, on 18 March 2020, the event was cancelled due to the COVID-19 pandemic.

In 2020, the band won the Most Trashy category with their video ''Go Bananas'' at the Berlin Music Video Awards. The same year, they also placed 3rd for the Best Music Video.

In October 2020, Little Big's cover version of "Gonna Make You Sweat (Everybody Dance Now)" was used over both the trailer and the closing credits of Borat Subsequent Moviefilm.

On 8 March 2021, Little Big released a new single, "Sex Machine," along with a video which referenced the video to "UNO" the year prior. However, they subsequently posted on Instagram, "We are not going to the Eurovision-2021. We think that Russia has many talented and unique artists, each one of them deserves the chance to be seen out there."

Little Big have been nominated for Best Art Director with their music video ''S*ck My D*ck 2020'' at the Berlin Music Video Awards 2021.

On 24 November 2021, Little Big released the video "“LITTLE BIG NFT SURPRISEN EGG” episode 1" to announce that the band was making NFTs. On 1 December 2021, people could buy 1 of 1000 unique surprise eggs which would hatch a week later, revealing one of the designs. Ilya Prusikin stated that they were inspired by Kinder Surprise Eggs, which are popular in Russia.

In 2022, the band plans to release a fourth studio album, said vocalist Ilya Prusikin. He also noted that 'We are a band that likes to work in so many styles: pop, rave, punk and hardcore. And (now) we embody our ambition and love for different genres in the (new) album. It will be different'.

The team calls itself a satirical art collaboration, which relies on the music, visuals, and the show. Little Big mocks various national stereotypes about Russia. All the videos are filmed by co-founder Alina Pasok. The band shoots and produces all of their music videos.

Since the first concert took place as the opening act for Die Antwoord, the band was dubbed "The Russian Die Antwoord", and is often compared with this band. Vice also called Little Big "a Russian mental patient's answer to Die Antwoord". Other critics point out that while Little Big has an identity of its own, it also exposes the listener to Russian folk songs and Russian culture.

The band was influenced by a variety of musicians from Cannibal Corpse, NOFX, Red Hot Chili Peppers, Rammstein, and The Prodigy to Mozart and Vivaldi. 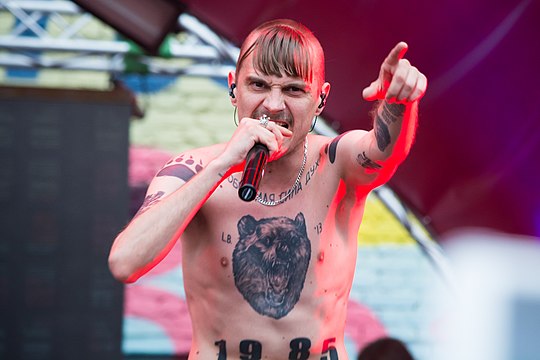 With Russia from Love

Welcome to the Internet