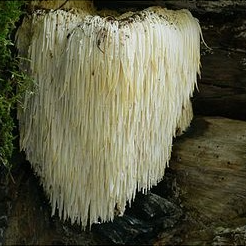 Hericium erinaceus (also called lion's mane mushroom, mountain-priest mushroom or bearded tooth fungus) is an edible mushroom belonging to the tooth fungus group. Native to North America, Europe and Asia, it can be identified by its long spines (greater than 1 cm length), occurrence on hardwoods, and tendency to grow a single clump of dangling spines. The fruit bodies can be harvested for culinary use.

Hericium erinaceus can be mistaken for other species of Hericium, which grow across the same range. In the wild, these mushrooms are common during late summer and fall on hardwoods, particularly American beech and maple. Usually H. erinaceus is considered saprophytic, as it mostly feeds on dead trees. However, it can also be found on living trees, so may be a tree parasite. This could indicate an endophytic habitat.

Hericium erinaceus produces edible fruiting bodies that have uses as food and in traditional medicine. Some guides consider it inedible.

Hericium erinaceus is common in gourmet cooking. Young specimens are considered the best. Alongside shiitake (Lentinus edodes) and oyster (Pleurotus ostreatus) mushrooms, H. erinaceus is used as a specialty mushroom. Its flavor may be compared to that of lobster. The production of specialty mushrooms in the USA increased by about 23% between 2010 and 2018 from 16 to 20 million lbs (7–9 million kg).

Hericium erinaceus contains diverse phytochemicals, including polysaccharides, such as β-glucan, as well as hericenones and erinacines. From its essential oil, 77 aroma and flavor compounds were identified, including hexadecanoic acid (26% of total oil composition), linoleic acid (13%), phenylacetaldehyde (9%) and benzaldehyde (3%), and other oils, such as 2-methyl-3-furanthiol, 2-ethylpyrazine and 2,6-diethylpyrazine. Low concentrations of ergosterol are present.

"Reforestation: Traditional Methods Have to Change". The Sierra Forest Voice. Vol. 8 no. 2. 2015