Who is Lily Collins?

Lily Collins is a popular British-American actress and model. A graduate from the ‘University of Southern California,’ the star has been in the acting and modeling world since the age of two, thanks to her famous musician father, Phil Collins. Very few people know that Lily Collins was interested in journalism as a young girl, but destiny had other plans for her. Following her studies, she first gained attention as a writer for popular teen magazines like ‘Teen Vogue’ and ‘Seventeen.’ Later on, she started hosting Nickelodeon-sponsored political campaigns. She made her acting debut in a feature movie titled ‘The Blind Side,’ before landing a lead role in an action-thriller. But it was her role as Snow White in ‘Mirror Mirror’ that paved the way for a bright future in Hollywood. As a model, Lily Collins modeled for several brands and received many honors. She was given the title ‘International Model of the Year’ by Spain’s ‘Glamour’ magazine after being chosen by the brand ‘Chanel’ to wear one of their gowns. In 2008, she was named ‘One to Watch’ at the ‘Young Hollywood Awards.’ 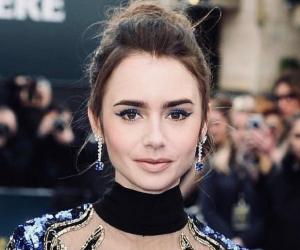 In the year 2007, Lily Collins was selected by the brand ‘Chanel’ to wear their gown at ‘Bal des débutantes’ at the ‘Hôtel de Crillon’ in Paris.

A young Collins covered the US presidential election in 2008, appearing as a host on ‘Kids Pick the President,’ a ‘Nickelodeon’ series.

She appeared in two episodes of a teen drama series titled ‘90210’ in 2009. In the same year, she also portrayed the character of ‘Collins Tuohy’ in the movie ‘The Blind Side.’

In 2011, Collins played the role of Lucy in the thriller flick ‘Priest,’ opposite Paul Bettany

The actress’s career reached newer heights in 2012 when she played the role of Snow White in ‘Mirror Mirror,’ a screen adaption of ‘Snow White and the Seven Dwarfs.’ The same year, she appeared in the movie ‘Stuck in Love’ alongside Logan Lerman, Jennifer Connelly, and Greg Kinnear.

In October 2013, a music video titled ‘City of Angels’ starring Lily Collins was launched. In the same year, she appeared in the films, ‘The Mortal Instruments: City of Bones’ and ‘The English Teacher.’

She appeared in the screen adaption of Cecelia Ahern’s book ‘Love, Rosie’ in 2014. In March 2016, she joined the cast of the drama film ‘To the Bone,’ playing a leading role.

Collins was also cast in the ‘Netflix’ drama film ‘Okja’ alongside Jake Gyllenhaal and Tilda Swinton. The film was directed by Bong Joon-ho.

In 2016, Collins became part of a pilot produced for ‘The Last Tycoon,’ which was loosely based on F. Scott Fitzgerald's last book of the same name.

In ‘Les Misérables,’ Collins starred as Fantine, a young woman in Paris who is abandoned by her wealthy lover, forcing her to look after their child Cosette on her own.

Lily Collins was born in Guildford.

Who is Lily Collins? Everything You Need to Know