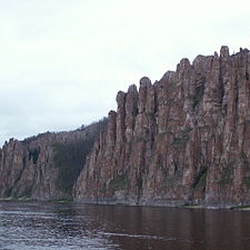 Lena Pillars is the name given to a natural rock formation along the banks of the Lena River in far eastern Siberia. The pillars are 150–300 metres (490–980 ft) high, and were formed in some of the Cambrian period sea-basins. The highest density of pillars is reached between the villages of Petrovskoye and Tit-Ary. The Lena Pillars Nature Park was inscribed on the World Heritage List in 2012.

One may plan a river cruise by contacting a travel service in the city of Yakutsk. Those interested in limnology or ecotourism, and others who visit Lake Baikal, can coordinate a river sojourn with the aid of a guide from the Lake Baikal region; however, consider that Yakutsk, the world's coldest city and where the river cruises originate, is approximately 1,400 kilometres (870 mi) northeast of Lake Baikal. Few modern amenities exist in this part of Russia, unless one travels by cruise ship on the Lena River. Tit-Ary on the other side of the river has a gravel road from Yakutsk. Viewpoint on top of hills

Hiking trails in the region are steep and at times precarious.

The pillars consist of alternating layers of limestone, marlstone, dolomite and slate of early to middle Cambrian age, which are weathered, producing the rugged outcrops. These types of rocks are commonly formed in marine environments and the horizontal layering and vertical variation indicates marine transgression/regression; with the slate representing the deep marine, slightly metamorphosed shales.

The climate is acutely continental with temperatures reaching as low as -60°C in winter and as high as +35°C in summer.