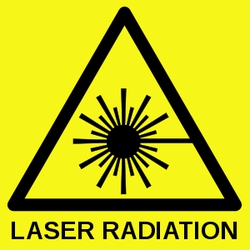 Laser beams can be hazardous, particularly for the eye (and sometimes also for the skin), mostly because they can have high optical intensities even after propagation over relatively long distances. More precisely, their high radiance is often the actual problem. Even when the intensity at the entrance of the eye is moderate, laser radiation can be focused by the eye's lens to a small spot on the retina, where it can cause serious permanent damage within fractions of a second – even when the power level is only of the order of a few milliwatts. Damage can result from both thermal and photochemical effects. Laser damage of the eye is not always immediately noticed: it is possible e.g. to burn peripheral regions of the retina, causing blind spots which may be noticed only years later.