Who is Kylian Mbappé?

Kylian Mbappé is a French professional football player, best known for his performance in the 2018 ‘FIFA World Cup.’ Mbappé became the youngest French to score a goal in a ‘World Cup.’ He finished his ‘World Cup’ campaign with four goals for which he was honored with the ‘FIFA World Cup Best Young Player Award.’ Former player Arsène Wenger has described him as a ‘huge football talent.’ The media has often compared him with the likes of Thierry Henry and Pelé. Known for his excellent dribbling skills, Mbappé is also famous for his agility, creativity, and acceleration when in possession of the ball. In 2017, Mbappé became the second-most expensive player in the world as he signed a €180 million contract with the French football club ‘Paris Saint-Germain.’ 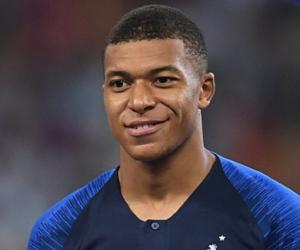 Mbappé made his debut on December 2, 2015, when he played for ‘Monaco’ in a ‘Ligue 1’ game against ‘SM Caen.’ By making his debut at the age of 16, he broke Thierry Henry’s record and became Monaco’s youngest-ever first-team player. He scored his first goal on February 20, 2016, becoming the youngest goal-scorer for ‘Monaco.’ On March 6, Mbappé signed a three-year contract with ‘Monaco.’

On February 21, he became the second youngest French football player to score a goal in ‘UEFA Champions League.’ On March 5, he scored two goals to help his team win against ‘FC Nantes.’ On March 11, he scored a goal against ‘FC Girondins de Bordeaux,’ securing a 2–1 win for ‘Monaco.’

On August 31, ‘Paris Saint-Germain’ announced that it had signed Mbappé on loan. He made his debut for ‘Paris Saint-Germain’ on September 8 and scored a goal to help his team win against ‘Metz.’ On December 6, he became the youngest player to score his tenth ‘Champions League’ goal when he scored against ‘Bayern Munich.’

On May 17, 2018, Mbappé was named in the national squad for the 2018 ‘FIFA World Cup.’ He scored his first ‘World Cup’ goal on June 21, helping France beat Peru in the ‘Group C’ match. On June 30, he won the ‘man of the match’ award for helping France secure a win against Argentina. During the game, he became the second teenager after the legendary Pelé to score twice in a ‘World Cup’ match.

On July 15, he scored a goal against Croatia in the ‘World Cup Final’ to help France win the prestigious tournament. He also became the second teenager to score a goal in a ‘World Cup Final.’ For his extraordinary performance throughout the ‘World Cup,’ Mbappé won the ‘Best Young Player Award.’

On September 1, 2018, he was sent off the field in a game against ‘Nîmes Olympique’ as he was given a red card for the first time in his career. On October 8, he scored four goals against ‘Olympique Lyonnais,’ becoming the youngest player to score four goals in a ‘Ligue 1’ game. Mbappé began his senior career with Ligue 1 club Monaco, making his professional debut in 2015, aged 16. With them, he won a Ligue 1 title, Ligue 1 Young Player of the Year, and the Golden Boy award. In 2017,he signed for league rivals Paris Saint-Germain on an initial loan, which was made permanent in 2018 in a transfer worth €180 million plus add ons, making him both the second-most expensive player and most expensive teenager.There, Mbappé has won three Ligue 1 titles, three Coupe de France titles,was named Ligue 1 Player of the Year twice, and has finished as Ligue 1 top scorer for three consecutive seasons. He is also the third-highest goalscorer in the club's history.At international level, Mbappé made his senior debut for France in 2017, Mbappé became the youngest French player to score at a World Cup, and became the second teenager, after Pelé.to score in a World Cup Final. He finished as the joint second-highest goalscorer as France won the tournament, and he received the Best Young Player and French Player of the Year awards for his performances.

Kylian Mbappé was born in Paris.

Who is Kylian Mbappé? Everything You Need to Know

Who is Kylian Mbappé? Everything You Need to Know