As a child, Sobchak attended the ballet school at the Mariinsky Theater and the Hermitage Art School. In 1998, Sobchak left school at Herzen University and entered St. Petersburg State University (Faculty of International Relations). In 2001, Sobchak moved to Moscow and entered the International Relations program at MGIMO. In 2002, Sobchak entered the magistracy at the political faculty of the same university. 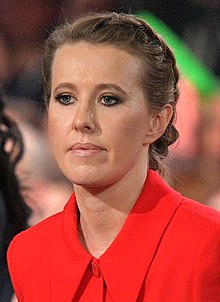 Sobchak became famous in 2004 as the host of the reality show Dom-2. She left the show in 2012 because the show's down-to-earth orientation became incompatible with her political activism.

From 2008 to 2010, Sobchak was the host of the reality show Who Doesn't Want to Be a Millionaire? , The Last Hero -6, and The Sweet Life of a Blonde, Muz-TV Award and Two Stars.

In 2010, Sobchak became the host of the Freedom of Thought TV program on the state-owned Channel 5. However, she soon left the program, as, according to her, it turned into an endless conversation about the improvement of housing and communal services.

Since 2011, Sobchak has hosted the Sobchak Live program on the independent Dozhd channel and Top Model in Russian on Muz-TV.

In 2012, she appeared in the television series Concise Guide to a Happy Life.

On September 7, 2012, a State Department talk show featuring Ksenia Sobchak started on MTV Russia. The show was supposed to cover hot social and political topics. The first episode of the show called "Where is Putin taking us?" Interviews with the head of the Left Front Sergei Udaltsov, a member of the Solidarity movement Ilya Yashin and eco-activist Yevgenia Chirikova were presented. However, the show was quickly canceled after one episode. The second episode was supposed to include an interview with anti-corruption blogger Alexei Navalny. Representatives of MTV Russia explained their decision to cancel the show by the lack of interest in politics among the channel's viewers. 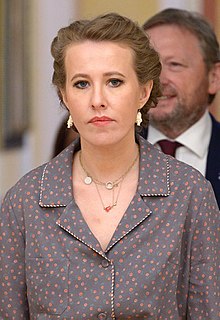 Sobchak starred in comedies Hitler kaput! , Rzhevsky against Napoleon , The Best Film and Entropy . Sobchak also starred in the film Thieves and Prostitutes (2004).

In 2007, Sobchak recorded the song 'Dance with me (Потанцуй со мной)' with Russian rapper Timati, as well as a music video (Music Video of 'Dance' with Ksenia Sobchak and Timati on YouTube). Russian media at the time attributed a relationship between Sobchak and Timati.

Sobchak had earlier posed for the cover of the British band Pulp's This is Hardcore album. Released in 1998, the album's artwork was produced by the artist John Currin. Asked about the cover, Sobchak said "The shoot was fun. Jarvis is very nice, very shy."

It was reported that Sobchak sold her ownership stake in Euroset for $2.3 million in December 2012.

On 28 December 2008, Sobchak was on an Aeroflot flight from Moscow to New York City when she and other passengers determined that the pilot was drunk prior to take-off. Sobchak used her socialite status to call Aeroflot representatives and remove the pilot from the cockpit.[16]

In 2009, Russia's Tatler magazine included her in a list of most desirable single women in the country. The list was based on women's fortune and celebrity status. She is known across Russia as a socialite, TV host and presenter. Sobchak was Russia's No.1 'it girl', an analogue to Paris Hilton.

Lyudmila Putina, Vladimir Putin, Lyudmila Narusova and Ksenia Sobchak (left to right) at the funeral of her father and Putin's former mentor, Anatoly Sobchak in 2000

Sobchak's father, Anatoly, had been both Vladimir Putin's and Dmitry Medvedev's law professor at Leningrad State University. He built a close relationship with Putin, in particular, and in 1991 Anatoly helped launch Putin's career in politics when he was the mayor of Saint Petersburg. Putin then helped Anatoly flee Russia when he was wanted on corruption charges. According to the Moscow News, "Putin's reported affection for the Sobchak family is widely believed to give Ksenia Sobchak a protected status, which may also explain her boldness", such as her encounter in October 2011 with Vasily Yakemenko, the controversial leader of the pro-Kremlin Nashi youth movement, when she reprimanded him for eating at an expensive restaurant in Moscow and published a video of the encounter on the internet.

Sobchak declared her candidacy in the Russian presidential election 2018 on 18 October 2017.[20] Prior to the announcement of her intention to enter the Presidential race in 2018, Sobchak discussed her intention personally with Putin. She said: "With Vladimir Vladimirovich, my family has been associated with a great deal... so I felt it right to say that I made such a decision". Putin, she said, told her that "every person has the right to make their own decisions and must be responsible for them".

In September 2017, prior to her announcement to run, Putin said of Sobchak's presidential intentions to a press conference at the 9th BRICS summit, that "Every person has the right to nominate himself in accordance with the law. And Ksenia Sobchak is not an exception here. I respect her father Anatoly Sobchak, I believe that he was an outstanding figure in contemporary Russian history. I'm saying this without a trace of irony. He was very decent, played a big role in my own destiny. But when it comes to running for presidency, things of a personal nature cannot play any significant role. It depends on what program she's offering, if she'll actually run, and how she'll build her presidential campaign".

Some skeptics accused Sobchak of being a pawn of Putin bent to undermine opposition candidate Alexei Navalny; the Kremlin often handpicks a high-profile liberal candidate to run in elections as part of its policy of "managed democracy" wherein Putin attempts to control the entire process. Other skeptics suspect Sobchak's candidacy is mostly about building her brand. Sobchak did not believe she could win against Putin in 2018, but has stated she's in it for the long haul: "Of course I want to be president, I want to win, but I also want to be sincere. In a system created by Putin, it is only possible for Putin to win. I am realistic about who will become the president."

On 15 March 2018, Sobchak and Dmitry Gudkov announced the creation of a new party, called the Party of Changes on the basis of the party Civic Initiative. The aim was of party was to "return our freedom and your freedom". Sobchak won 1.68% of the vote in the 2018 presidential election.

Today, Sobchak is critical of Putin's political policies. Although she says she had "happily" voted for Putin in the past when she was younger, she will not do so any longer. In the 2012 Russian presidential election, Sobchak says she voted for Mikhail Prokhorov.

After the parliament elections held on 4 December 2011, which are known for the large number of alleged fraud reports, Sobchak joined the protest rallies held in Russia as a response to the alleged electoral frauds. She also took part in the campaign against Putin's re-election, working as an observer during the president elections held on 4 March 2012. She was one of the Russian protest participants targeted by the Investigative Committee of Russia on 12 June 2012, when her apartment in Moscow was entered and searched.

On 18 October 2017, she declared her candidacy for the presidency of Russia. In her campaign statements she described herself as someone "outside of ideology" and promised to never criticize Vladimir Putin personally because he had personal connections with her father.

Sobchak is a supporter of free-market capitalism and privatization. Outlining her economic views, she writes:

Russia is a country of a free economy with a strong state sector. All large state corporations should be privatized with antitrust restrictions. The state should not control any sectors of the economy, the state's share in enterprises and industries should be limited to breaking up monopolies. Private property should be protected by law, the review of any ownership and nationalization are possible only on a reimbursable basis on the basis of independent market valuations. Reform of tax and regulatory legislation and practices should stimulate the development of private entrepreneurship, small and medium-sized businesses, technological and innovative development of enterprises, education. The list of licensed branches of the economy should be significantly reduced

Sobchak describes herself as a feminist. In her manifesto, she derides the lack of women's representation in industry and politics.

Almost 500 heavy professions in Russia are officially closed to women. But among all the others - the salary of a woman is almost 30% less than that of a man. Among the most important companies in the country, women head only about 5%. ... In any case, half the country's population deserves a female voice for the first time in 14 years in these allegedly male games.

On the status of Crimea

Ksenia Sobchak is of the opinion that, having annexed Crimea from Ukraine in 2014, Russia violated the 1994 Budapest Memorandum; she claimed on 24 October 2017 that "Under these agreements, we agreed that Crimea is Ukrainian, which is the most important for me". Sobchak stressed that she did not consider the issue with Crimea resolved. "I believe that these things need to be discussed, it is very important to discuss them....look for some ways out." She also added that "the most important thing that Russia and Ukraine should do now is to restore our friendship at any cost." Simultaneously she suggested to hold a new referendum on the status of Crimea after "a broad and equal campaign." In December 2017, Sobchak claimed that an unconditional withdrawal of Russia from Crimea would lead to a civil war in Russia.

Sobchak has said that if she becomes president, she will remove the body of Vladimir Lenin from Red Square, since, in her opinion, this is an indicator of a "medieval way of life in the country... so the corpse of Lenin must be removed from Red Square." Sobchak's proposal has led to wide-spread criticism, with Gennady Zyuganov stating: "It's tragic for the country when Ksenia and the like appear, who do not respect the will of a great country."

In her interview discussion with Julia Volkova in 2021 Sobchak voiced her support for LGBT rights in Russia, stating that she disagrees with the country's controversial "gay propaganda law".

In 2015, Sobchak said that if there was ever the possibility of political persecution against her, she had thought about emigration or getting an Israeli passport, but would prefer America where she could find a Russian-speaking community:

I'm a very big patriot. I really love my job, the city, my friends. And if tomorrow is war, then the place for emigration will have to be a Russian-speaking place. I have to work in Russian.

GLEB PAVLOVSKY: about the third world war, the main mistakes of the Kremlin and the art of surviving