the character of Parasyte

Kazuyuki Izumi (泉一之, lit. Izumi Kazuyuki) is the husband of Nobuko Izumi and the father of Shinichi Izumi. He is a former magazine writer, now freelance.

Kazuyuki is a tall middle-aged man with a mustache and black hair that he keeps combed. He's normally seen wearing a brown button up vest over a green long sleeved shirt and blue jeans.

In the beginning, Kazuyuki is a rather laid-back person, seeming to go with the flow with any changes he notices that take place in Shinichi. He was not above poking fun at Shinichi's fear of bugs and expressed some confusion and exasperation at Nobuku's sensitivity about their son's changes.

Later on, however, after she dies, he becomes depressed and develops a drinking problem. He does eventually open up to Shinichi about Nobuko's fate, though he initially shows negative feelings for Shinichi's ability to keep moving after her death. 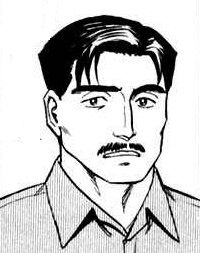