K-means is used to find clusters in a data space, where clusters group data points that share similar features with one another.

The K-means algorithm is a clustering algorithm which divides groups of objects into K partitions based on their attributes. A cluster is identified by a centroid or midpoint. The algorithm follows an iterative procedure.

Here are steps that allow the K-means to converge to optimal data separation:

where there is a centroid in the set C (which includes all the centroids), x are the datapoints and dist is the standard Euclidean distance. 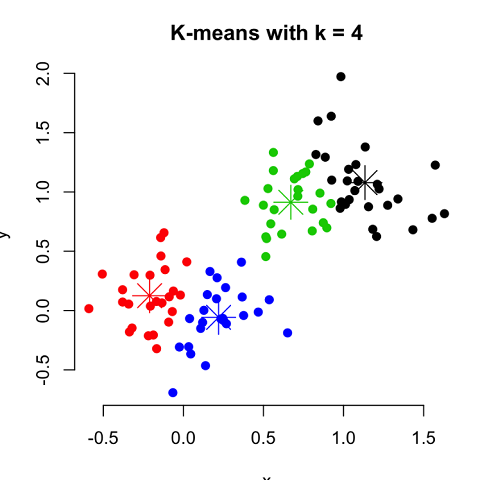 A demonstration of how K-means groups data.

K-means clustering is one of the simplest and most effective algorithms belonging to unsupervised learning. Clusters represent the groups that divide the objects based on whether or not they share a particular similarity between them, and are chosen a priori, before the execution of the algorithm.

K-means works by identifying K centroids, imaginary points in space that represent the center of the grouping, and places each point at the nearest cluster. The variable K is defined by the data scientist and defines the number of centroids (or clusters) to be identified.

The value of K is arbitrary, but there are several ways to calculate the optimal value, one of which is the Elbow method.

How to find the ideal number of clusters
Elbow method

Researchers of unsupervised learning must try to determine the appropriate amount of clusters to use in a given problem.

The question is very pertinent because if researchers already had this information, as in supervised clustering, it would be possible to derive the attributions from the labels and categories that are already defined. In this case, instead, the number of clusters is defined a priori and then their memberships are calculated. One of the most immediate methods to accomplish this is the so-called Elbow method.

The Elbow method consists in computing the total sum between the distances of each point and its nearest centroid. Since an increase in a cluster is related to smaller groupings and distances, this sum will decrease when K increases and vice versa.

As an extreme example, if we choose a value K equal to the number of data points we have, the sum will be zero, because the centroid will coincide with each point and the total distance is zero.

This sweet spot is called the elbow point. 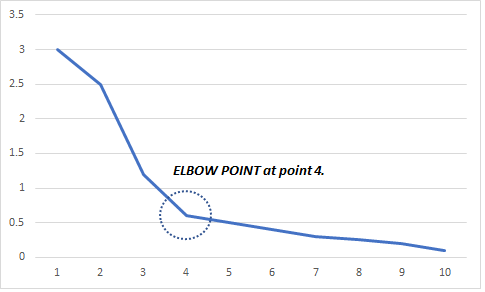 Elbow method. The within-cluster sum of squares drastically changes at the point 4, indicating that 4 clusters can effectively group data

In this case, the elbow point falls at the value 4, which should be the number of clusters used to initialize the K-means algorithm with.

K-means clustering can be used for numerous applications. Here are some examples.

K-means is usually implemented in Python, R, Octave, or Matlab.

K-Means Clustering: From A to Z

SOME METHODS FOR CLASSIFICATION AND ANALYSIS OF MULTIVARIATE OBSERVATIONS