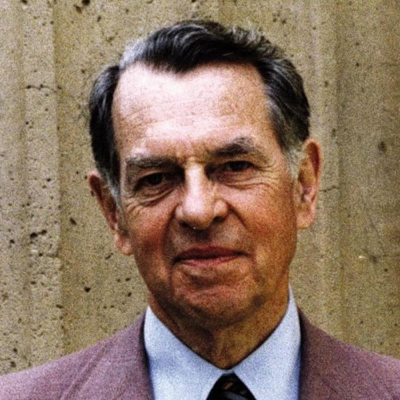 Joseph Campbell (March 26, 1904 – October 30, 1987) was an American mythologist, author, and lecturer, best known for his work in the fields of mythological juxtaposition and religion juxtaposition. The list of his works is huge and includes many aspects of the human experience. His philosophy is often identified with the phrase he said: "Follow the awareness of pleasure."

Joseph Campbell was born and raised in White Plains, New York. He graduated from Canterbury School in 1921, went on to Dartmund College, where he went on to study biology and mathematics, and subsequently to Columbia University, where he received an M.Sc.

in English Literature in 1925 and an M.S. in Old Literature in 1927. Among his outstanding books are such as "Myths in which we live", "Thousand-faced Hero", "Masks of God", "Mythical Image", "Historical Atlas of World Mythology".

Joseph Campbell gained great popularity after a series of television interviews with journalist Bill Moyers in 1985 and 1986, and also due to the fact that he, according to George Lucas, was the inspiration for the Star Wars movie.

Campbell died of growth at age 83 at home in Hawaii shortly after filming The Power of the Myth with Bill Moyers wrapped.

In his programmatic work "The Mythical Image", the American scientist, researcher of the nature of myth and symbol Joseph Campbell (1904-1987), conducting a comparative analysis of the mythologies of various peoples of the world, as well as mythological literature, touches on such topics as the idea of ​​cosmic order, the transformation of inner light, redemption through self-sacrifice and sacrifice, spiritual awakening.

Relying on the analytical psychology of K.G. Jung and the ideas of traditionalists, the author comes to the conclusion that, despite the apparent diversity of cultural and religious traditions, each of them is based on common archetypal images - the Great Mother, the Mountain of the World, the Lord of death and immortality, the Holy Family, etc.

Mythology and Transformation of the Personality", based on the materials of his lectures and public speeches in the 1960-1980s, explores the psychological function of myth. According to Campbell, myth is a universal matrix of personal growth. Using it to the fullest extent, a person can live in harmony with his Linking together ancient symbols and modern art, primal rituals and the hero's journey, Campbell helps the reader discover the myth of their soul, the path that leads to bliss.

Campbell's book is a classic study of mythology based on psychoanalysis, which gives the key to the mysteries of the symbolic language common to the myths of all world cultures with their archetypal hero. Moving from the psychological to the metaphysical plane of analysis, Campbell presents the heroic journey as a cosmogonic cycle. Having passed through the trials of initiation, having overcome the threshold between being and nothingness, the hero, as the embodiment of microcosm and macrocosm, dissolves in the Higher Self, thereby completing his path. Birth and death, life and non-existence, the birth and disappearance of the world - all this is subject to a single model of the journey of the mythological hero and the cosmogonic circle. This scheme remains unchanged in the initiation rites of primitive peoples, and in the developed mythology of ancient civilizations, and in the world of fairy tales familiar to us from childhood, and in the dreams of our contemporaries. Using the material of hundreds of myths from all corners of the globe, from ancient times to the present day, the greatest American mythologist of our century, Joseph Campbell, unfolds in his exciting book a majestic and large-scale picture of the journey of a many-sided hero, moving from the ordinary world into the beyond darkness, finding patrons and enemies there. who meets with the goddess - mother and god - father and, as a result of his adventures, achieves the final reward - a generous gift that can benefit and save humanity.

Since its release, this legendary book has sold millions of copies around the world. Joseph Campbell is a famous anthropologist and comparative psychologist. In this book, the author describes the hero's journey, considers the universal motif of adventure and transformation, which are reflected in the world mythological tradition. George Lucas, after the release of Star Wars in the late 1970s, stated that the film was based on ideas described in The Hero with a Thousand Faces and other Campbell books.

What is effective mythology and what is its function? Is it possible today to `live in myths`? Can they help a modern person to relieve anxiety or can they only feed it?

Joseph Campbell (1904-1987) shows the life-giving connection of people with their myths, the role of myths in the development and realization of the creative possibilities of the individual and the whole society.

The book is written in a clear and engaging way. The abundance and talented presentation of serious material, the relevance - and actualization - of `eternal` problems, it surpasses many official textbooks on religious studies, psychology, history and mythology proper.

For a wide range of readers.

- Four functions of the myth according to J. Campbell:

Traditional mythology has four main functions. Of these, the first is mystical: it evokes and maintains in a person a feeling of admiration, gratitude and reverent horror before the mystery of being, the mystery of life.

The fact of being is not very easy to admit. Judge for yourself: hundreds of thousands of years passed before human eyes opened and saw life as it is. And what did their eyes see when they opened? They saw how life feeds on life.

The first function of primitive mythology is precisely to teach us to accept this fact: life devours itself. Admit it! And only about 800 BC. what I call the "great reversal" has come: people who have a certain sensitivity to such things have decided that life is a horror that they will not accept. Schopenhauer said: "Life is something that should not have been." There are people - not a few people - who find life so terrible that they walk away from life. It was at this time that the mythology of escape from life, the denial of life, was born.

The third variant, Zoroastrianism, is documented as being born sometime between the 11th and 7th centuries BC, a myth in which a deity created an ideal world that was subsequently destroyed by some evil force. The Lord of Good, Truth and Light creates this world; The Lord of Darkness and Deception corrupts this world. And what is happening now is a recovery process. You can participate in the recovery process by participating in all the good things in this world by doing good. The idea of ​​good and evil has come down to us in the form of the Christian tradition, in the form of the Fall and the Redemption.

As far as I know, these are the three main mythological points of view: the first is the complete acceptance of life, the second is the complete rejection of life, and the third is "I will accept the world when it becomes as I imagine it should be." The popular non-religious variety of the latter view is, of course, our modern position of gradually reforming the world for the better.

The third function of the traditional mythological system is sociological, that is, its function is to justify and maintain a certain social structure of society. Usually this is done like this: it is declared that the Supreme Being who created the Universe also created the Good Social Order. For example, in the biblical tradition there is the idea of ​​God creating the world; the same God gives Moses the Law on Mount Sinai - the 10 Commandments and so on. Biblical Laws are as inflexible as the laws of nature. They cannot be changed; one cannot go against them without destroying, destroying oneself.

Also in India, instead of the idea of ​​God the Creator, the idea of ​​some impersonal force that periodically materializes and de-materializes the Universe dominates: the same Universe is in a constant process of creation - disappearance. The laws by which this process takes place are the same laws by which animals and people exist. These laws cannot be changed - they are an indivisible part of the Universal Order.

The fourth and last function of traditional mythology is psychological. It consists in leading a person through the stages of his life, from childhood dependence to the responsibility of an adult (in terms of the society in which he lives), and further, to the Last Door.

Comparing the traditional mythologies of the peoples of the world, you come to the conclusion that it is this fourth function that is the most constant, the fourth and also the first, mystical.