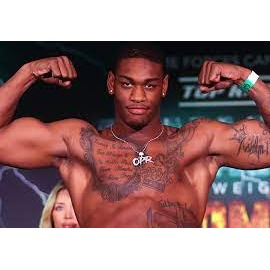 Jared Dovan Anderson (born November 16, 1999) is an American professional boxer who has held the Junior NABF heavyweight title since October 2021. As an amateur he won the 2017 and 2018 U.S. National Championships.

Anderson signed a multi-year promotional contract with Bob Arum's Top Rank on September 24, 2019, and made his professional debut a month later on October 26, scoring a first-round knockout (KO) victory over Daniel Infante at the Reno-Sparks Convention Center in Reno, Nevada.

Anderson was scheduled to face Kingsley Ibeh on February 13, 2021, and won his first fight of 2021 by a sixth-round knockout. Anderson next faced Jeremiah Karpency on April 10, 2021, and once again won by a knockout, stopping Karpency early in the second round. Anderson improved to 10–0 when he beat the previously undefeated Vladimir Tereshkin (22–0–1) on October 9, 2021 on the undercard of Tyson Fury vs. Deontay Wilder III via second-round technical knockout. Anderson was scheduled to face Oleksandr Teslenko on December 11, 2021, on the undercard of the Vasiliy Lomachenko and Richard Commey lightweight bout. He won the bout via second-round technical knockout.

"Created via: Web app"
Vitaliy Luzhnyy created this topic on 22 Jan, 2022
Edits made to:
Infobox (+1 properties)