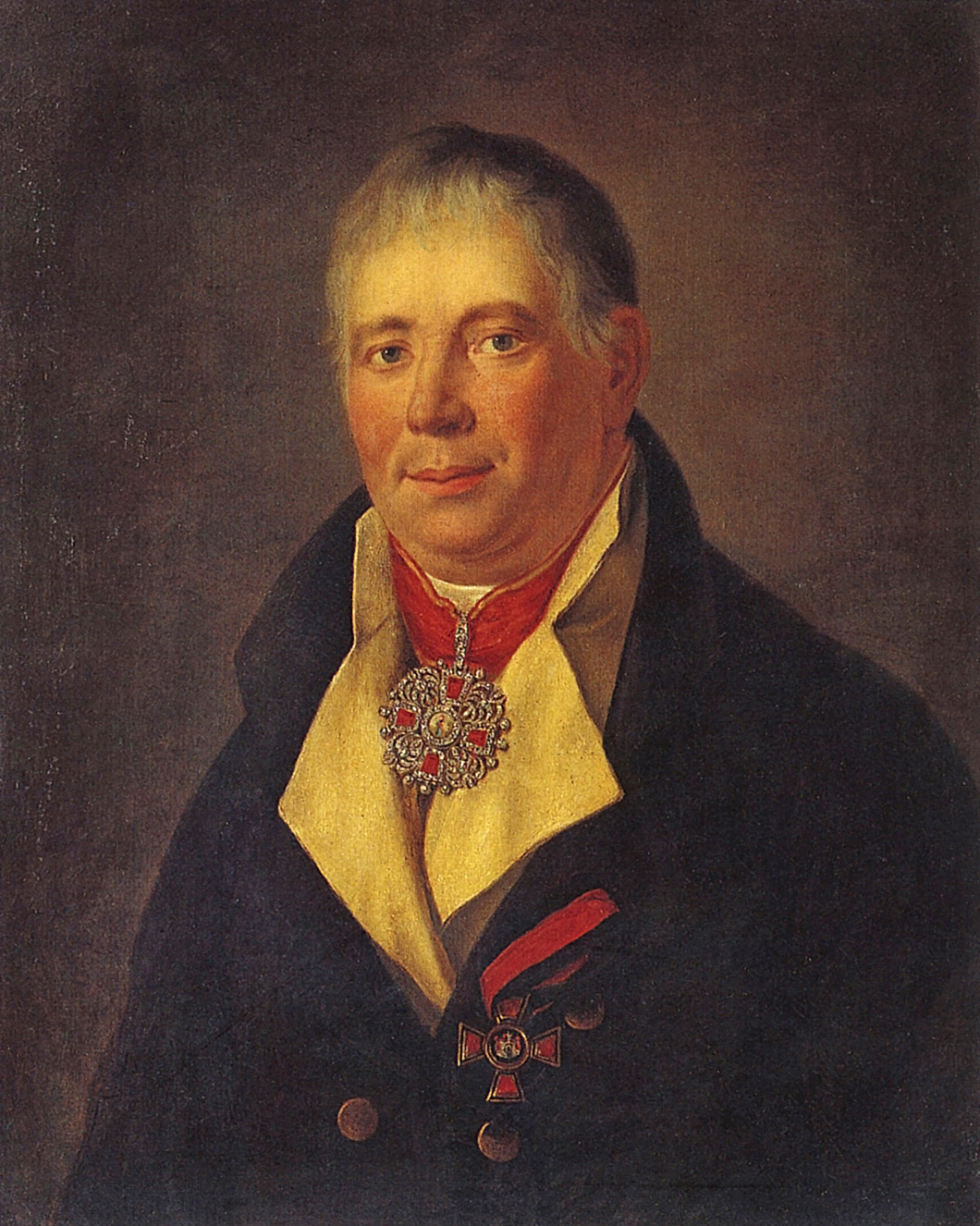 classicism in the Russian person.

Fate is often unfair: one is destined to be remembered for centuries, while others, no less talented, are almost completely forgotten in a couple of decades.

Russian Russian artist Grigory Ugryumov's name is known today mainly to art historians, as well as to curators and guides of the Russian and Yaroslavl museums, where most of the heritage of the founder of Russian academism is collected.

Grigory Ugryumov lived and painted at the turn of the XVIII-XIX centuries, the customers of his most famous canvases were Paul I, Catherine II and Alexander I.

The painter was at the origins of the Russian tradition of historical art, taught at the Academy of Arts, the formation of which is inextricably linked with his name.

The activity of the Imperial Academy of Arts, which emerged as one of the educational projects of Peter I, belongs to the stage of formation of Russian artistic culture.

In 1820, three years before his death and after almost thirty years of teaching at the Academy, Grigory Ugryumov, whom modern researchers call the first Russian colorist, became rector of the Department of Historical Painting.

Among the most famous works of Ugryumov are the historical panoramic works commissioned by Paul I, "The Capture of Kazan by the troops of Ivan the Terrible", "The Calling of Mikhail Fedorovich Romanov to the kingdom on March 14, 1613".

It was these canvases that brought him lifetime fame, honor and love of the autocrats. Ugryumov has won the laurels of a painter who writes for magnificent interiors — the Engineering Castle in St. Petersburg, the Mikhailovsky Castle in Pskov.

Even earlier, Catherine II condescended to his talent, who commissioned him to paint a grandiose canvas "The Solemn Entry of Alexander Nevsky into Pskov" for the Trinity Cathedral of the Alexander Nevsky Lavra. 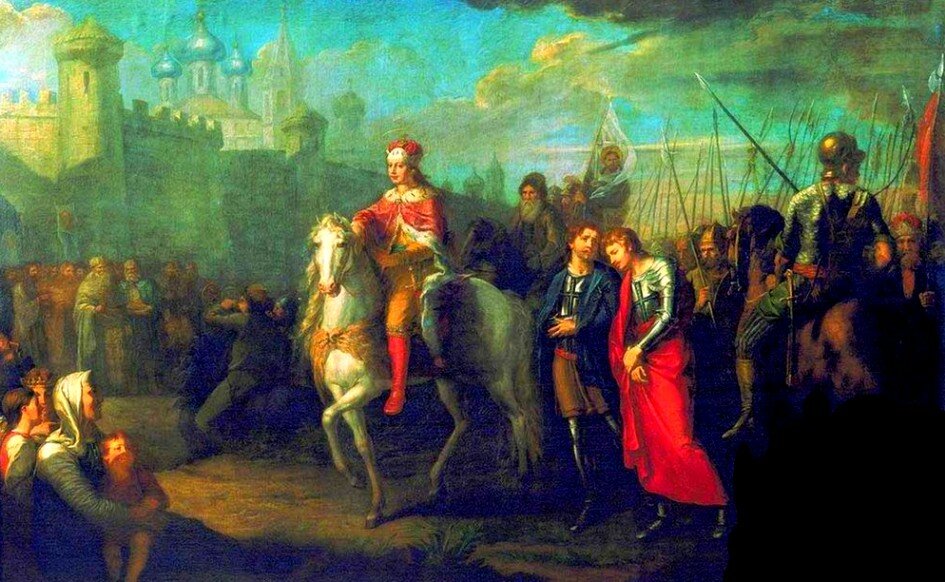 G.I. Ugryumov :"The solemn entry of Alexandr Nevsky to Pskov"

Grigory Ivanovich was also interested in iconography — images 3 meters high, painted by him for the northern and southern gates of the main iconostasis of the Kazan Cathedral of the Mother of God, strike with an atypical interpretation, bold for church art brightness of color, sensual expressiveness.

Nevertheless, to a greater extent, contemporaries are touched by the soulful portraits of his brush: it was Grigory Ugryumov who preserved for us the features of the artist Orest Kiprensky, the writer and translator Vasily Vodovozov.

The beginning of the life and fate of Grigory Ugryumov are amazing: born in 1764 in the patriarchal family of the metropolitan merchant Ivan Ugryumov, at the age of seven the boy gets to St. Petersburg, to the Educational School at the Imperial Academy of Arts.

This was the decision of his father, to whom merchant life and immersion in the tin trade did not prevent him from seeing in his son a talent for drawing.The teachers appreciated, albeit not immediately, the abilities of the new pupil: 15 years later, in 1785, Gregory painted a large canvas on the Old Testament theme "Exiled Hagar with her young son Ishmael in the desert", which becomes not only his "thesis", but also a pass to the world of European painting — the young artist receives a large gold medal and a scholarship for a four-year stay in Italy.

It should be noted that it was the Italian masters of the brush who especially inspired Ugryumov during his apprenticeship, when his main mentor was the Russian classicist artist Dmitry Levitsky. In Rome, Ugryumov spent four years copying the works of Veronese and Guido Reni with particular passion.

In 1791, after returning from Italy, 36-year-old Ugryumova began teaching historical painting at the Academy of Fine Arts, and six years later created the canvas "The Test of the Power of Jan Usmar", which earned him the title of "appointed to the Academy". 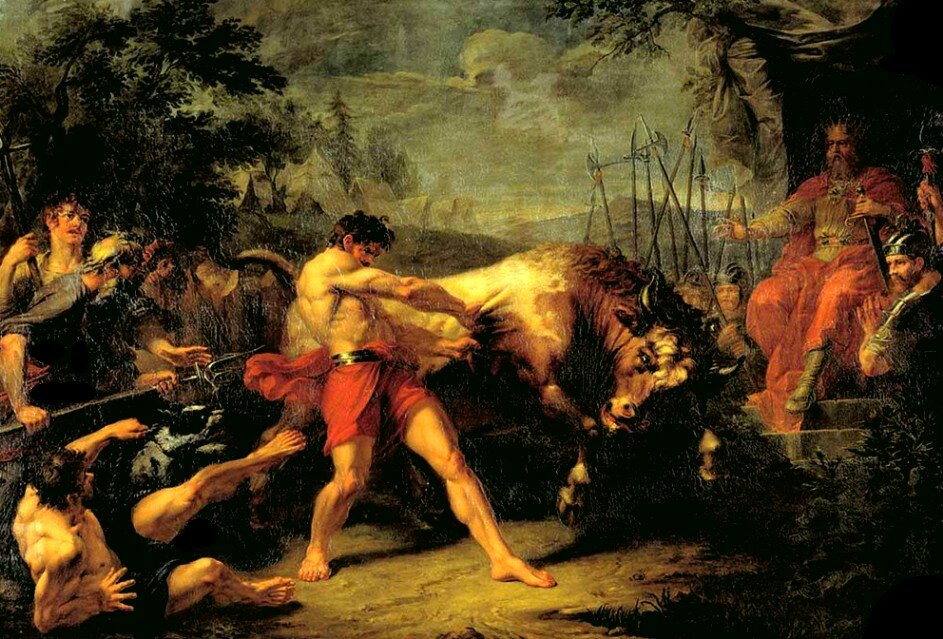 G.I. Ugryumov: "The test of the power of Jan Usmar"

This is the first recognition of Ugryumov as a great master of the brush. In 1798 he was elevated to associate professor, in 1800 he was awarded the title of professor, since 1800 he has been a member of the Council of the Academy of Arts, an honorary member of the Free Society of Lovers of Literature, Sciences and Arts, caressed by the Russian autocrats.

The artist passed away in 1823, his ashes rest at the Smolensk Cemetery in St. Petersburg. Most of the works are in the Russian and Yaroslavl museums.

Grigory Ugryumov was born in Moscow.