Not to be confused with the historic Grey Columns building in Tuskegee, Alabama.

What Is a Grey Column?

A grey column is any one of three ridge-like bodies of neural tissue called grey matter that's found in the spinal cord and extends lengthwise along the middle of both halves of it. It's sometimes called the grey horn because it has a horn-like appearance when the spinal cord is cut into transverse sections. The individual names for the grey columns are the anterior, lateral, and posterior grey columns. Each grey column is responsible for sending different types of information to the brain for processing.

Not to be confused with the historic Grey Columns building in Tuskegee, Alabama. 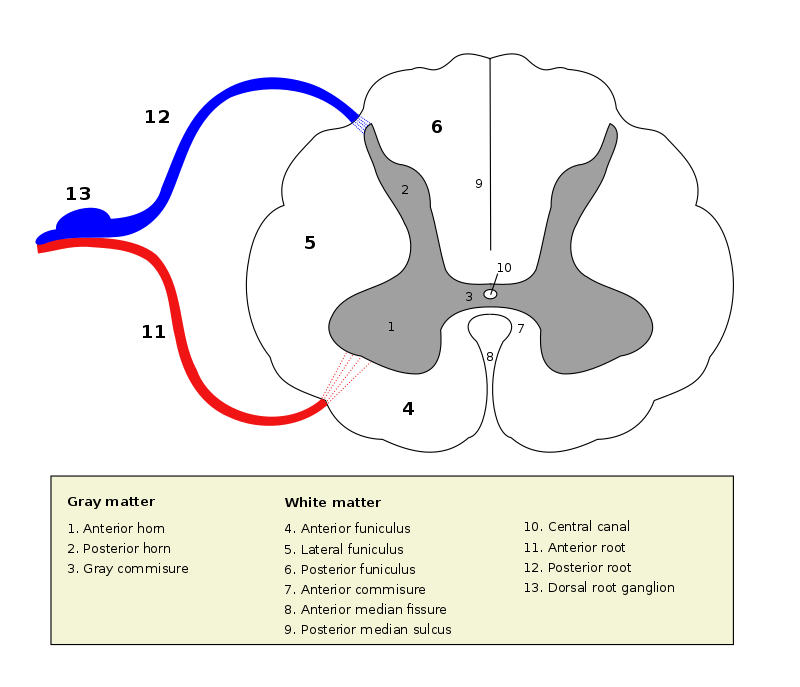 The anterior grey column, also known as the anterior horn of spinal cord, comprises three different types of neurons: large alpha motor neurons, medium gamma motor neurons, and small neurons thought to be interneurons.[2] These neurons differ in both their morphology and in their patterns of connectivity.[3] They are organized in the same manner as the muscles they innervate.[4

Alpha motor neurons innervate extrafusal muscle fibers that generate force at neuromuscular junctions at the start of muscle contraction. They have large cell bodies and receive proprioceptive input.[3] They have been shown to reduce in population, but not in size with age.[2] Damage to these cell bodies can lead to severe muscle weakness and loss of reflexes.[5]

Gamma motor neurons innervate intrafusal muscle fibers that control the sensitivity of muscle spindles to stretch. They have smaller cell bodies than alpha motor neurons and do not receive proprioceptive input.[3] They have been shown to reduce in numbers but not size with age.[2

The physiology of the small neurons in the anterior column is not well understood. Their effects can be both excitatoryand inhibitory. They are suspected to be interneurons and have been shown to reduce in size but not numbers with age.[2] 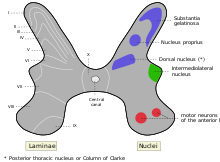 Lamina I[edit]Lamina I is also known as the marginal nucleus of spinal cord. The majority of posterior column projection neurons are located in lamina I, however most neurons in this layer are interneurons.[10] The main areas these neurons innervate are the caudal ventrolateral medulla (CVLM), the nucleus of the solitary tract (NTS), the lateral parabrachial area (LPb), the periaqueductal grey matter (PAG), and certain regions in the thalamus.[8] The CVLM receives nociceptive and cardiovascular responses.[11] The NTS receives cardio-respiratory inputs and affects reflex tachycardia from noxious stimulation.[12] The LPb projects to the amygdala and hypothalamus and is involved in the emotional response to pain.[13]The PAG develops ways to deal with pain and is a main target of analgesics. It projects to other parts of the brainstem.[14]The nuclei of the thalamus affect sensory and motivational aspects of pain.[15] The neurons of this lamina can be distinguished by their morphology as pyramidal, spindle, or multipolar.[16]Lamina II[edit]This layer is also known as the substantia gelatinosa of Rolando and has the highest density of neurons.[17] These neurons mediate the activity of nociceptive and temperature afferent fibers.[4] It is almost entirely made up of interneurons which can be further divided by their morphology. The four main morphological classes, based on the shape of their dendritic structure, are islet, central, vertical, and radial cells. The interneurons can also be divided by their function: excitatory or inhibitory. The excitatory interneurons release glutamate as their main neurotransmitter and the inhibitory interneurons use GABA and/or glycine as their main neurotransmitter. The neurons of this layer are only C fibers and contain almost no myelin.[18]Laminae III and IV[edit]These laminae are also known as the nucleus proprius and contain a much smaller density of neurons than lamina II.[17] There are projection neurons scattered throughout these layers.[10] Mechanosensitive A beta fibers terminate in these layers.[9] The layers receive input from lamina II and also control pain, temperature, and crude touch.[4] C fibers that control nociception and temperature and sensory information from mechanoreceptors are relayed here.[19]Lamina V[edit]This lamina is also known as the neck of the posterior column and receives information from mechanoreceptors and danger information from nociceptors.[19] It has different neurons in different regions. In the medial region it contains medium-sized triangular neurons and the lateral region contains medium-sized multipolar neurons.[17]Lamina VI[edit]This lamina is only found in the cervical and lumbar regions of the spinal cord. It receives afferent input from muscle fibers and joints.[4]Lateral grey column[edit]The lateral grey column, or the lateral horn of spinal cord, is part of the sympathetic nervous system and receives input from brain stem, organs, and hypothalamus. The lateral column is only present in the thoracic region and upper lumbar segments. The lateral grey column contains neurons supplying nerves to the muscles of the limbs, preganglionic cell bodies of the autonomic nervous system and sensory relay neurons.

Neurons in the anterior column have been shown to be affected by amyotrophic lateral sclerosis (ALS). The number of large alpha motor neurons and medium gamma motor neurons was greatly reduced and the number of small neurons was either slightly or greatly reduced depending on the type of ALS.[20]Muscular atrophy has also been shown to have an effect on neurons of the anterior column. A large loss of large alpha motor neurons, medium gamma motor neurons, and small neurons was recorded in cases of muscular atrophy.[21]Damage to the lateral column can result in Horner's syndrome.Multiple system atrophy (MSA), has also been linked to the lateral grey column. MSA has been shown to reduce the cell count in the lateral column by over 50%.The posterior column has a prominent role in the pain system, it is the first central relay in the nociceptive pathway. The first order afferent neuron carries sensory information to the second order neuron in the dorsal horn. The axon of the second order neuron, if it is a projection neuron and not an interneuron, then goes to the third order neuron in the thalamus. The thalamus is known as the "gateway to the cortex". The third order neuron then goes to the cerebral cortex. The afferent neurons are either A fibers or C fibers. A fibers are myelinated allowing for faster signal conduction. Among these there are A beta fibers which are faster and carry information about non-painful touch and A delta fibers which are slower and thinner than the A beta fibers. The C fibers are not myelinated and therefore slower.[10]C fibers that carry nociceptive signals can be divided into two types: fibers that contain neuropeptides, like substance P, and fibers that do not contain neuropeptides.[22] The two types terminate in very different areas. Non-peptidergic C fibers are linked to the skin, where they innervate the epidermis while peptidergic C fibers innervate other tissues and deeper parts of the skin.[10]There are two main types of nociceptive signals: sensory and affective.

What is the Spinal Cord?