Who is Gisele Bündchen?

Gisele Bundchen needs no introduction; at least to the fashion aficionados. Regarded as the highest-paid model on the planet, Gisele Bundchen enjoys lucrative revenues from over 20 fashion and personal care brands she endorses, along with her own line of fashion products. Her journey from a 14-year old awkward teenage model to a full-fledged multiplatform business tycoon has often been the talk of the fashion industry. This tall-leggy beauty, with navy-blue eyes and honey-colored hair, rose to international fame when she won a record-breaking contract with the American lingerie retailer, Victoria’s Secret, which helped it grow from an ordinary bra brand to a world-famous lingerie giant. Her appearance on international fashion editorials and magazines and regular catwalks at fashion shows made her the most in-demand supermodel. This first-ever model billionaire is regarded as the most popular fashion export from Brazil and is ranked on Forbes’ list of ‘top-earning models’ for eight consecutive years. Apart from being a goodwill ambassador for the United Nations Environment Programme, she also heads the non-profit organization, Rainforest Alliance, involved with biodiversity conservation and sustainability. This Brazilian bombshell has often been in the media for her relationships with high-profile male celebrities. 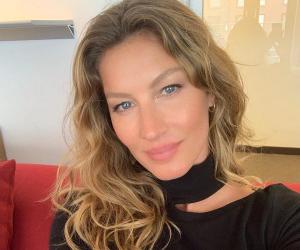 She traveled to New York in 1996 and debuted on the runway at New York Fashion Week.

Her high-fashion break came in 1997 when she walked for Alexander McQueen’s Spring 1998 ‘Rain’ ready-to-wear show in London, christened as ‘The Body’.

In 1998, she debuted on British Vogue’s cover and became the most sought-after model, bringing an end to Kate Moss’s ‘heroin chic’ era and re-establishing the ‘sexy model’ period.

In 1999, she graced the cover of French Vogue under the name ‘The Return of the Sexy Model’ and featured on the cover of i-D titled ‘A Girl Called Gisele’.

After Rolling Stone named her ‘The Most Beautiful Girl in the World’ in 2000, her career skyrocketed, letting her open shows for Christian Dior, Dolce & Gabbana, Michael Kors, Valentino, and Marc Jacobs.

She ventured into acting with the 2004 film ‘Taxi’, directed by Tim Story, playing the leader of a bank robbers’ gang. In 2006, she did a cameo role in the icon fashion film ‘The Devil Wears Prada’.

She ended her contract with Victoria’s Secret in 2007, on the pretext of concentrating on other projects and denying rumors of payment disagreements.

Gisele Bündchen was born in Horizontina.

Who is Gisele Bündchen? Everything You Need to Know

Who is Gisele Bündchen? Everything You Need to Know