Who was Gia Carangi?

Gia Carangi was one of the very first supermodels in the United States of America. She embarked on a very promising career which was unfortunately cut short due to her drug abuse and personal problems. In just six years of being a professional model, she had achieved a lot of success. Carangi had posed as the cover girl for top fashion magazines like ‘Cosmopolitan’ and ‘Vogue’. At one time, she was the first choice for top brands like ‘Giorgio Armani’, ‘Gianni Versace’, ‘Maybelline’, ‘Christian Dior’, ‘Chanel’, ‘Yves Saint Laurent’ and ‘Levi Strauss & Co.’ Her life took an unfortunate turn in the early 1980s as she became addicted to cocaine and her career went downhill very soon. She did try to get sober and keep her career afloat but failed miserably in her attempts to do so. Later she was diagnosed with AIDS-related complications and became one of the very first celebrity women to die of the disease. Several television shows, documentaries, as well as films were made on her life. Angelina Jolie played her in a biopic named ‘Gia’ which was telecast on HBO. Jolie was awarded for her role in the biopic. 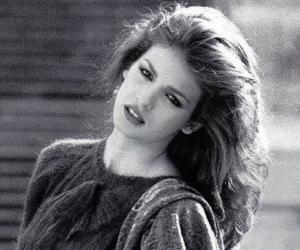 Gia Carangi had a very short but glamorous career. She managed to feature in several advertisements in Philadelphia newspapers. This gave her the hope of making it big in the fashion industry. Thus, she left Philadelphia for New York City at the young age of seventeen.

After moving to New York, she immediately signed with the ‘Wilhelmina Models’. Within months, she managed to grab her first major photo shoot—by top fashion photographer Chris von Wangenheim. Carangi posed nude for Wangenheim, behind a chained fence. The photo shoot also featured Sandy Linter with whom Carangi formed a romantic bond later.

Her first major photo shoot earned her wider attention in the fashion industry and she went on to work with several top fashion photographers including Arthur Elgort, Richard Avedon, Denis Piel, and Francesco Scavullo. Soon, Carangi became the ‘go-to girl’ for the top fashion magazine ‘Vogue’. She was featured in the ‘Vogue UK’, ‘Vogue Paris’, ‘American Vogue’ and ‘Vogue Italia’ from April 1979 to August 1980. She also posed for ‘Cosmopolitan’ multiple times between 1979 and 1982, and represented top clothing brands. She was the face of ‘Armani’, ‘Christian Dior’, ‘Versace’, ‘Yves Saint Laurent’, ‘Levi Strauss & Co.’, and ‘Calvin Klein’.

During the golden period of her career, Carangi started living a luxurious and wild life. Her frequent visits to the nightclubs led her to regular cocaine usage. She became addicted to the drug and fell prey to it. Soon, she started having troubles in working as she would walk out of her photo shoots and often lose control of herself. She would cry for not having drugs during her shoots and it became difficult for others to control her. In one of ‘American Vogue’s’ issues, Carangi was spotted with needle marks despite a lot of airbrushing in those pictures.

Several top brands distanced themselves from her and she struggled to find work. She tried rehabilitation and attempted to make a comeback but nothing worked out in her favor as she could never get rid of her addiction.

Who was Gia Carangi? Everything You Need to Know

Who was Gia Carangi? Everything You Need to Know