Who is George Lucas?

George Lucas is an American film director, screenwriter, producer, and entrepreneur. He is widely regarded as one of the most commercially successful filmmakers in the American film industry. However, filmmaking was not his ambition when he was young. Interestingly, this ace director was in love with speed and wanted to become a car racer. But a near fatal accident forced him to change his mind and he chose to pursue a career in filmmaking. He later attended the ‘University Of Southern California School Of Cinematic Arts’ where he studied motion picture and went on to make a number of student films. His short film ‘Electronic Labyrinth: THX-1138 4EB' won the first prize at the ‘National Student Film Festival.’ He then went on to make some of the most successful films in Hollywood. He created the famous ‘Star Wars’ franchise, a series of six films that earned more than $5 billion. He also created the legendary character ‘Indiana Jones’ as part of the ‘Indiana Jones’ film series. He is also the founder of the film and television production company ‘Lucasfilm,’ which he later sold to ‘The Walt Disney Company.’ Apart from being a filmmaker, he is also a philanthropist and founder of ‘The George Lucas Educational Foundation.’ 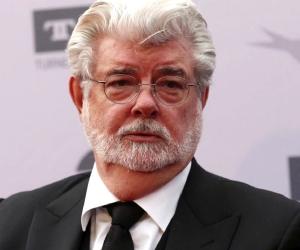 In 1973, he co-wrote and directed a film titled 'American Graffiti,' which was a coming-of-age film. The film was critically acclaimed and earned an ‘Academy Award’ nomination.

In 1977, he wrote and directed the American epic space opera film ‘Star Wars Episode IV: A New Hope.' The following year, he was one of the creators and executive producers of the TV show ‘Star Wars Holiday Special.’

In 1979, he produced and co-wrote the comedy-drama film 'More American Graffiti.' The next year, he served as the executive producer of 'Kagemusha' and 'Star Wars Episode V: The Empire Strikes Back.'

In 1983, he co-wrote the screenplay for the third film in the ‘Star Wars’ series, ‘Star Wars Episode VI: Return of the Jedi.’ The same year, he was the executive producer of the animated film ‘Twice Upon a Time.’

In 1985, he served as the executive producer for films, such as ‘Latino’ and 'Mishima: A Life in Four Chapters.' That year, he also produced the TV shows, ‘Star Wars Droids: The Adventures of R2-D2 and C-3PO,’ ‘Ewoks,’ and ‘Ewoks: The Battle for Endor.’

In 1989, he co-wrote and produced Steven Spielberg’s film ‘Indiana Jones and the Last Crusade.’ This was the third film in the ‘Indiana Jones’ film series.

In 1992, he created and developed the American TV series ‘The Young Indiana Jones Chronicles,’ which was aired on the ABC network. After two years, he co-wrote and produced the film ‘Radioland Murders.’

In 1999, he wrote and directed the American epic space opera film 'Star Wars Episode I: The Phantom Menace.' This was the fourth film of the ‘Star Wars’ franchise.

In 2002, he wrote and directed ‘Star Wars Episode II: Attack of the Clones,’ the fifth film in the ‘Star Wars’ film series. The film was a commercial success and received mixed to positive reviews from the critics.

In 2003, he co-created the ‘Emmy’ award-winning animated micro series ‘Star Wars: Clone Wars,' which was inspired by the 'Star Wars' universe.

In 2005, he wrote and directed the sixth film in the ‘Star Wars’ film series, 'Star Wars Episode III: Revenge of the Sith.' The film was a massive success at the box office.

In 2008, he co-wrote the story for 'Indiana Jones and the Kingdom of the Crystal Skull,' the fourth film in the 'Indiana Jones' film series. That year, he also co-produced the film ‘Star Wars: The Clone Wars.’

In 2012, he was the executive producer of the American war film ‘Red Tails.’ The same year, he announced his semi-retirement from large scale films and chose to focus on smaller, independent films.

His next project after his semi-retirement was the 2015 computer animated musical fantasy film ‘Strange Magic’ for which he wrote the story and also served as the executive producer.

George Lucas is currently working as the executive producer for the fifth film of the famous ‘Indiana Jones’ film series, which is slated for release in 2022.

Who is George Lucas? Everything You Need to Know