Freerunning is a discipline similar to parkour created by Sebastian Foucan. 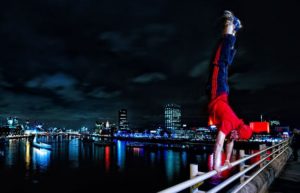 No, this is not jogging to the nearest fast food place for a helping of french fries. Freerunning (from the English free - free, run - running) is a relatively young discipline based on the principles of parkour and created by Sebastian Foucan, a French actor and eminent tracer athlete with Caribbean roots. It should be noted that at one time he was one of the founders of the then emerging parkour together with David Bell, but at some point their differences in views on parkour reached a critical point, and he was forced to start a solo sports career. 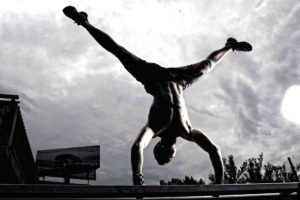 The term freerun itself was first introduced by one of the producers of the film Jump London as an alternative to parkour, which was not very common at that time, and since then it has become more and more dense in the slang of people who are fond of non-standard and extreme sports. In a nutshell, this is a synthesis of athletics (running), yoga, acrobatics and various combinations of gymnastic elements such as somersaults, somersaults, rondas, etc. The main and indisputable advantage of freerunning is its general availability. A beginner who decides to go in for this sport does not need to spend money on a subscription to a fitness club, buy exercise equipment and expensive equipment. All you need to get started is a pair of comfortable running shoes and pants with a T-shirt.

Freerunning and parkour - what's the difference?

As Sebastian Foucan himself put it, the movement of a parkour player is limited to two points, the starting point and the final place of arrival, besides, parkour, having stepped from the streets to the TV screens, has become a hostage of its own entertainment, that is, the athlete, while overcoming the designated distance, worries about how effectively this or that trick looks in front of the camera lens. Everything else fades into the background.

The path that has manifested itself ceases to be the path” Chuang Tzu, Taoist philosopher, 6th century BC. 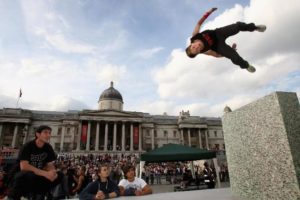 reerunning adherents value freedom first and foremost. The revolutionary nature of this discipline is in the synthesis of physical culture and philosophy. Tracers single out fear as the main obstacle in achieving results both in sports and in everyday life, and they are trying with all their might to overcome it, and each individual athlete has his own methods and no one can claim to know the ultimate truth, since freerunning does not tolerate established rigid frameworks, rules and restrictions, giving maximum freedom of choice to its followers. Someone is afraid of heights, someone is afraid to fall while performing a difficult trick, someone looks ridiculous in the eyes of others. Going to the distance, tracers cast aside all these fears or merge with them together, thereby plunging into the world of boundless freedom, which, in their opinion, consists in

The basic principles of the discipline consist in the rigorous acceptance of Freedom as the main driving force. Freerunning does not tolerate violence, insists on the complete equality of participants, hence the lack of leaders and priority in the inner world of the athlete. Holding competitions also becomes extremely problematic due to the lack of judges and the rejection of authorities by tracers in principle. Teamwork is also not a freerunning strong point, because, as already mentioned, the main emphasis is on finding an individual development path. 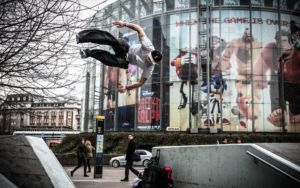 How to get started?

1) For starters, it’s good to find like-minded people in your city, for example, through social networks, although freerunning is not quite a team discipline, no one has yet canceled the positive impact of the exchange of experience.

2) Be extremely careful, do not set yourself a stupid goal to achieve everything at once, repeatedly and slowly repeat acrobatic elements when learning. As the saying goes, hard to learn, easy to fight.

3) You should not repeat without preparation those things that you could see when watching videos on Youtube at the request of freerunning. There are likely months, if not years, of training behind a two-minute video.

4) Pay close attention to the quality of your shoes. Good sneakers are at least a guarantee that you will not twist your foot in the first workout.

Freerunning was born in Republic of France.