The Ford Consul Classic is a mid-sized car that was launched in May 1961 and built by Ford UK from 1961 to 1963. It was available in two or four door saloon form, in Standard or De Luxe versions, and with floor or column gearshift. The name Ford Consul 315 was used for export markets. The Ford Consul Capri was a 2-door coupé version of the Classic, and was available from 1961 until 1964.

The 1,340 cc (82 cu in) four-cylinder pre-crossflow Kent engine was replaced in August 1962 by an over-square 1,498 cc (91.4 cu in) engine with a new five-bearing crankshaft and a new gearbox with synchromesh on all four forward ratios. Steering and suspension also received "greased for life" joints.

It is sometimes referred to as the Ford 109E, though that was only one of four such codes utilized for the Consul Classic, as explained below. Obvious competitor models at the time included the Hillman Minx and Singer Gazelle from Rootes Group. 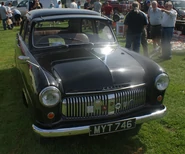 The Consul was first shown at the 1950 London Motor Show and was the start of Ford of Britain's successful attack on the family saloon car market and replaced the larger-engined V-8 Pilot which had only been made in small numbers. It was given the Ford code of EOTA. Most cars were 4-door saloons with body design by George Walker of the parent United States Ford company, but a few estate cars were made by the coachbuilder Abbott. From 1953 a convertible conversion by Carbodies became available. The body was reinforced by welding in a large X-frame to the floor pan. Unlike the more expensive Zephyr, the hood (convertible top) had to be put up and down manually.

It was also the first car they built with up-to-date technology. The new 1508 cc 47 bhp (35 kW) engine had overhead valves, and hydraulic brakes were used, but a three-speed gearbox, with synchromesh only on second and top, was retained. They were also the first production cars to use the now-common MacPherson strut independent front suspension, and was the first British Ford with modern unibody construction.

There is a bench front seat trimmed in PVC, and the handbrake is operated by an umbrella-style pull lever under the fascia (dash). The windscreen wipers use the antiquated vacuum system. The instruments, consisting of speedometer, ammeter and fuel gauge, are positioned in a housing above the steering column, and there is a full-width parcel shelf on which an optional radio could be placed.

In 1956 a new Consul appeared with the Ford code of 204E. The car was still the four-cylinder sub-model of the Zephyr range, with which it shared the same basic body shell. Compared with the original it had a longer wheelbase, larger 1703 cc, 59 bhp (44 kW) engine and a complete restyle, based on the US, 56 Thunderbird and Fairlane. One thing not updated was the windscreen wipers, which were still vacuum-operated. The roof profile was lowered in 1959 on the Mk2 version, which also had redesigned rear lights and much of the external bright work in stainless steel. Front disc brakes with vacuum servo appeared as an option in 1960 and were made standard in 1961 (4-wheel drum brakes only, in Australia). The name became the Consul 375 in mid-1961.

The convertible version made by Carbodies continued. A De Luxe version with contrasting roof colour and higher equipment specification was added in 1957. The Australian market had factory-built versions of the pick-up (utility) and estate car (station wagon), as well as a locally engineered version of the saloon. They were also imported by Ford of Canada as a competitor to the Falcon. 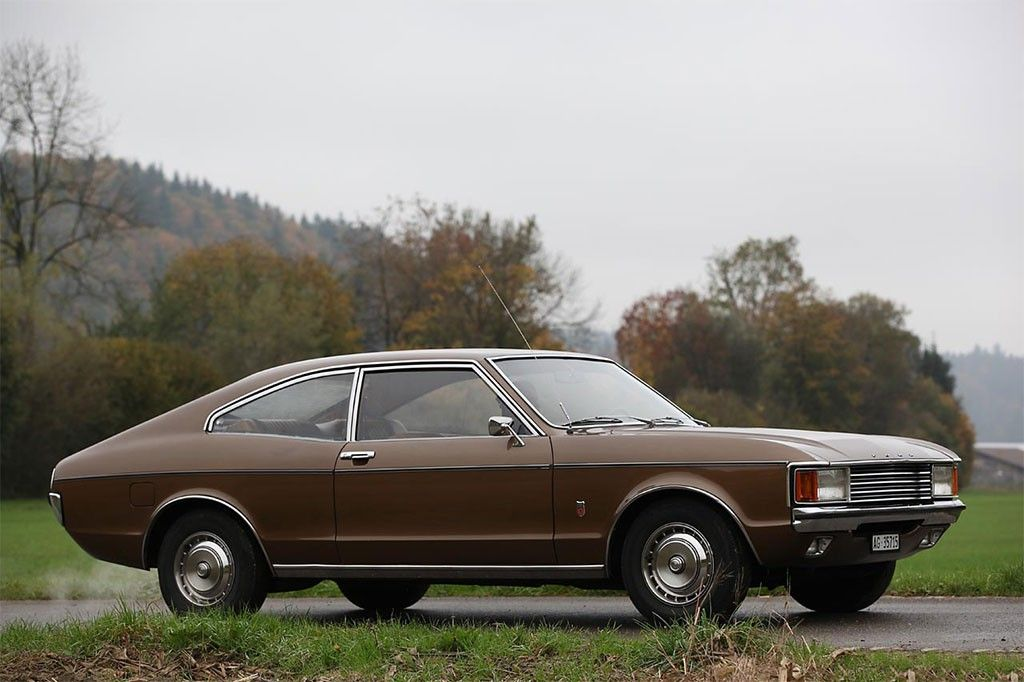 The Consul name was revived for the small-engined Granada with 1996 cc Essex V4, later 2.0 Pinto, or 2495 cc Essex V6 power units in the UK. In Germany this Ford Consul was offered with a choice of German built Ford engines, starting with the 1680 cc Ford Taunus V4 engine familiar to drivers of the Ford Taunus 17M.

In the UK a Ford Consul GT was also offered, featuring the 2994 cc Essex V6 engine providing a claimed 138 brake horsepower (103 kW). Because it was less well equipped than the similarly powered Granada, it was approximately 1 long cwt (110 lb; 51 kg) lighter and correspondingly quicker.

The name was dropped in late 1975 and all the cars became Granadas.

The name was dropped and all the cars became Granadas.
End of production Ford Consul mk2

The 1,340 cc (82 cu in) four-cylinder pre-crossflow Kent engine was replaced by an over-square 1,498 cc (91.4 cu in) engine with a new five-bearing crankshaft and a new gearbox with synchromesh on all four forward ratios.

was launched in production
The roof profile was lowered
A DeLuxe version with contrasting roof colour and higher equipment specification was added
A Consul MkII tested by the British magazine The Motor
New Consul appeared with the Ford code of 204E.
Convertible conversion by Carbodies became available
The Consul was first shown at the 1950 London Motor Show