Fennel (Foeniculum vulgare) is a flowering plant species in the carrot family.[2] It is a hardy, perennial herb[3] with yellow flowers and feathery leaves.[4] It is indigenous to the shores of the Mediterranean but has become widely naturalized in many parts of the world, especially on dry soils near the sea-coast and on riverbanks.

It is a highly aromatic and flavorful herb used in cooking and, along with the similar-tasting anise, is one of the primary ingredients of absinthe. Florence fennel or finocchio (UK: /fɪˈnɒkioʊ/, US: /-ˈnoʊk-/, Italian: [fiˈnɔkkjo]) is a selection with a swollen, bulb-like stem base that is used as a vegetable 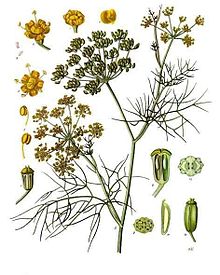 Fennel came into Old English from Old French fenoil which in turn came from Latin faeniculum, a diminutive of faenum, meaning "hay".

The Greek name for fennel is marathon (μάραθον) or marathos (μάραθος),[5] and the place of the famous battle of Marathon literally means a plain with fennel.[6] The word is first attested in Mycenaean Linear B form as ma-ra-tu-wo.[7] In Hesiod's Theogony, Prometheus steals the ember of fire from the gods in a hollow fennel stalk.[8]

As Old English finule, fennel is one of the nine plants invoked in the pagan Anglo-Saxon Nine Herbs Charm, recorded in the 10th century.

In the 15th century, Portuguese settlers on Madeira noticed the abundance of wild fennel, and used the Portuguese word funcho (fennel) and the suffix -al to form the name of a new town, Funchal.

Longfellow's 1842 poem "The Goblet of Life" repeatedly refers to the plant and mentions its purported ability to strengthen eyesight:

Above the lower plants it towers,

The Fennel with its yellow flowers;

And in an earlier age than ours

Was gifted with the wondrous powers

Fennel, Foeniculum vulgare, is a perennial herb. It is erect, glaucous green, and grows to heights of up to 2.5 metres (8 ft), with hollow stems. The leaves grow up to 40 centimetres (16 in) long; they are finely dissected, with the ultimate segments filiform (threadlike), about 0.5 millimetres (1⁄50 in) wide. (Its leaves are similar to those of dill, but thinner.) The flowers are produced in terminal compound umbels 5–15 centimetres (2–6 in) wide, each umbel section having 20–50 tiny yellow flowers on short pedicels. The fruit is a dry schizocarp from 4–10 millimetres (3⁄16–3⁄8 in) long, half as wide or less, and grooved. Since the seed in the fruit is attached to the pericarp, the whole fruit is often mistakenly called "seed".[citation needed]

Fennel is widely cultivated, both in its native range and elsewhere, for its edible, strongly flavored leaves and fruits. Its aniseed or liquorice flavor comes from anethole, an aromatic compound also found in anise and star anise, and its taste and aroma are similar to theirs, though usually not as strong.

Florence fennel (Foeniculum vulgare Azoricum Group; syn. F. vulgare var. azoricum) is a cultivar group with inflated leaf bases which form a bulb-like structure. It is of cultivated origin, and has a mild anise-like flavor, but is sweeter and more aromatic. Florence fennel plants are smaller than the wild type. Several cultivars of Florence fennel are also known by several other names, notably the Italian name finocchio. In North American supermarkets, it is often mislabeled as "anise".[16][17]

Fennel has become naturalized along roadsides, in pastures, and in other open sites in many regions, including northern Europe, the United States, southern Canada, and much of Asia and Australia. It propagates well by seed, and is considered an invasive species and a weed in Australia and the United States. In western North America, fennel can be found from the coastal and inland wildland-urban interface east into hill and mountain areas, excluding

Dried fennel fruits are typically used as a spice and normally eaten only in minute quantities. A 100-gram reference amount of fennel fruits provides 1,440 kilojoules (345 kilocalories) of food energy, and is a rich source (20% or more of the Daily Value, DV) of protein, dietary fiber, B vitamins and several dietary minerals, especially calcium, iron, magnesium and manganese, all of which exceed 100% DV (table). Fennel fruits are 52% carbohydrates (including 40% dietary fiber), 15% fat, 16% protein and 9% water (table).

Fennel was prized by the ancient Greeks and Romans who used it as medicine, food, and insect repellent. A fennel tea was believed to give courage to the warriors prior to battle. According to Greek mythology, Prometheus used a giant stalk of fennel to carry fire from Mount Olympus to Earth. Emperor Charlemagne required the cultivation of fennel on all imperial farms.

Florence fennel is one of the three main herbs used in the preparation of absinthe, an alcoholic mixture which originated as a medicinal elixir in Europe and became, by the late 19th century, a popular alcoholic drink in France and other countries. Fennel fruit is also used in the production of akvavit. Fennel is also featured in the Chinese Materia Medica for its medicinal functions.

The bulb, foliage, and fruits of the fennel plant are used in many of the culinary traditions of the world. The small flowers of wild fennel (known as fennel "pollen")[28] are the most potent form of fennel, but also the most expensive.[29] Dried fennel fruit is an aromatic, anise-flavored spice, brown or green in color when fresh, slowly turning a dull grey as the fruit ages. For cooking, green fruits are optimal.[13] The leaves are delicately flavored and similar in shape to those of dill. The bulb is a crisp vegetable that can be sautéed, stewed, braised, grilled, or eaten raw. Tender young leaves are used for garnishes, as a salad, to add flavor to salads, to flavor sauces to be served with puddings, and also in soups and fish sauce.[30] Both the inflated leaf bases and the tender young shoots can be eaten like celery.[12]

Fennel fruits are sometimes confused with those of anise, which are similar in taste and appearance, though smaller. Fennel is also used as a flavoring in some natural toothpastes. The fruits are used in cookery and sweet desserts.[30]

Many cultures in India, Afghanistan, Iran, and the Middle East use fennel fruits in cooking. In Iraq, fennel seeds are used as an ingredient in nigella flavored breads.[31] It is one of the most important spices in Kashmiri cuisine and Gujarati cooking.[32] It is an essential ingredient of the Assamese/Bengali/Oriya spice mixture panch phoron[33] and in Chinese five-spice powders. In many parts of India, roasted fennel fruits are consumed as mukhwas, an after-meal digestive and breath freshener (saunf), or candied as comfit. Fennel seeds are also often used as an ingredient in paan, a breath freshener most popularly consumed in India.[31]

Fennel leaves are used in some parts of India as leafy green vegetables either by themselves or mixed with other vegetables, cooked to be served and consumed as part of a meal. In Syria and Lebanon, the young leaves are used to make a special kind of egg omelette (along with onions and flour) called ijjeh.

Many egg, fish, and other dishes employ fresh or dried fennel leaves. Florence fennel is a key ingredient in some Italian salads, often tossed with chicory and avocado, or it can be braised and served as a warm side dish. It may be blanched or marinated, or cooked in risotto.

Fennel fruits are the primary flavor component in Italian sausage. In Spain, the stems of the fennel plant are used in the preparation of pickled eggplants, berenjenas de Almagro. An herbal tea or tisane can be made from fennel.[34]

On account of its aromatic properties, fennel fruit forms one of the ingredients of the well-known compound liquorice powder. In the Indian subcontinent, fennel fruits are also eaten raw, sometimes with a sweetener. 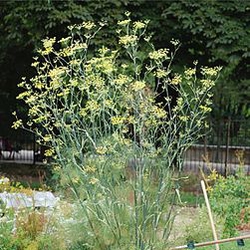