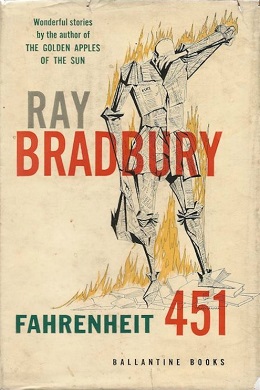 Fahrenheit 451 is a 1953 dystopian novel by American writer Ray Bradbury. Often regarded as one of his best works,[4] the novel presents a future American society where books are outlawed and "firemen" burn any that are found.[5] The book's tagline explains the title as "the temperature at which book paper catches fire, and burns": the autoignition temperature of paper. The lead character, Guy Montag, is a fireman who becomes disillusioned with his role of censoring literature and destroying knowledge, eventually quitting his job and committing himself to the preservation of literary and cultural writings.