FC Levadia Tallinn is an association football club in estonia founded in 1998.

Football Club Infonet Levadia Tallinn, commonly known as FCI Levadia, or simply as Levadia, is a professional football club based in Tallinn, Estonia, that competes in the Meistriliiga, the top flight of Estonian football. The club's home ground is Lillekyla Stadium.

Founded as Levadia in Maardu in 1998, the club moved to Tallinn in 2004. The club has played in the Meistriliiga since the 1999 season and have never been relegated from the Estonian top division. Levadia have won 9 Meistriliiga titles, a record 9 Estonian Cups and 7 Estonian Supercups. In 2017, Levadia's first team merged with FCI Tallinn, and became FCI Levadia.

The Lillekyla Stadium (known as A. Le Coq Arena for sponsorship reasons) is a football stadium in Tallinn, Estonia. It is the home ground of football club Flora and the Estonia national football team. With a capacity of 14,336, it is the largest football stadium in Estonia. 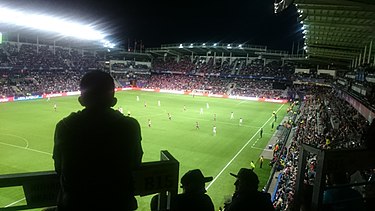 Levadia won the league in the 2004 season
Levadia finished the 2002 Meistriliiga as runners-up, only two points behind champions Flora
Finished the 2001 season in third place
Levadia was founded