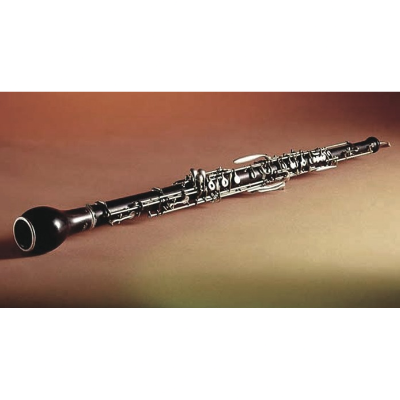 "The article will be supplemented by"
Yanezh Kosoga edited on 10 Feb, 2022
Edits made to:
Description (+49 characters)
Article (+4876 characters)
Related Topics (+2 topics)

The English horn, really an alto oboe , is neither English not a horn. One theory concerning its name is that the "English" probably came from confusion in pronunciation and spelling of the word "angled ," which refers to the bent crook holding the reed , and that the word "horn" may have come from the shape of the oboe dacaccia , the immediate ancestor of the English horn, which was curved like the

hunting horn. This theory is the most popular, but, like all the others, it cannot be proved conclusively.

The exact derivation of the name is unknown and open to speculation. The English horn, known also as the (cor Anglais), apparently developed at the same time as the oboe but was not as readily accepted. The first recorded reference to the instrument is in Purcell 's "Diocletian," in 1691; it seems to have been neglected for the next twenty-five years. Bach, however, used the oboe dacaccia extensively between (1723) and (1740). The English horn became a regular member of the modern orchestra with Wagner.

In fact, not much is known about the development of this instrument. It is assumed that it is the same as the oboe. The main differences between

History of the alto oboe

The English horn was created in the early 18th century in what is now Poland or Germany, formerly these lands were called Silesia. Sources indicate different versions of its origin. According to one, it was created by the Silesian master Weigel and the alto oboe was made in the shape of an arch. Other sources state that the creation belongs to the German instrumental inventor Eichentopf. He took the oboe as the basis, improving its sound with a rounded bell and lengthening the channel. The master was surprised by the pleasant, soft sound that the instrument produced. He decided that such music was worthy of angels and named it the Engels Horn. The consonance with the word "English" gave the name to the horn, which has nothing to do with England.

The pear-shaped bell of the English horn gives it a more closed timbre than the oboe, closer in tone to the oboe d'amour. While the oboe is a soprano instrument in the oboe family, the English horn is usually considered an alto oboe, and the oboe d'amour - located between them in A tonality - as a mezzo-soprano. The English horn has a softer, more pitiful tone than the oboe. The difference in sound is primarily due to the wider reed and tapered bore, which extends a greater distance than that of the oboe; although it is darker in tone and lower in pitch than the oboe, its sound blends naturally with it. Its appearance differs from that of the oboe in that the instrument is considerably longer, the reed is attached to a slightly curved metal tube called a goblet, or hook , and the bell is convex.

The English horn is usually recorded in the fiddle key a clear quint above the sound. Some composers recorded it in the bass key when the lower register was in constant use, and several other variations have historically been used. The alto key, sometimes used even by a late composer such as Sergei Prokofiev . In late 18th- and early 19th-century Italy, where the instrument was often played by bassoonists rather than oboists, it was written in bass key an octave below the sounding pitch (as in Rossini's overture to William Tell ). French opera composers before Fromenthal Galevisa recorded the instrument with the pitch in the mezzo-soprano key, which allowed the player to read the part as if it were in the violin key.

Perhaps the most famous manufacturers of the modern English horn are the French firms F. Lorée , Marigaux and Rigoutat, the British firm TW Howarth and the American firm Fox Products . Also in demand are the instruments of smaller manufacturers such as A. Laubin . Instruments are usually made of African ebony (also known as Grenadilla), although some manufacturers offer instruments in alternative woods, such as cocobolo (Howarth) or violet wood (Lorée), which are said to slightly alter the voice of the English horn, producing a softer sound. Fox has recently made some instruments in plastic and maple, the latter being the wood traditionally used for bassoons.

"Created via: Web app"
Yanezh Kosoga created this topic on 7 Feb, 2022
Edits made to: