Astronomical event where one body hides another

The fact that an eclipse can occur at all is a fluke of celestial mechanics and time. Since the moon formed about 4.5 billion years ago, it has been gradually moving away from Earth (by about 1.6 inches, or 4 centimeters per year). Right now the moon is at the perfect distance to appear in our sky exactly the same size as the sun, and therefore block it out. But this is not always true.

The April 30 eclipse will only be visible from parts of Antarctica and the southern tip of South America, as well as parts of the Pacific and Atlantic oceans.

There are four types of solar eclipses: total, partial, annual and hybrid. Total solar eclipses happen when the sun is completely blocked by the moon.

How many eclipse are there?

There are two complete eclipse seasons, one at each node, during a calendar year. Because there is a new moon every month, at least one solar eclipse, and occasionally two, occurs during each eclipse season.

7.5 minutes is the longest duration for a total solar eclipse. 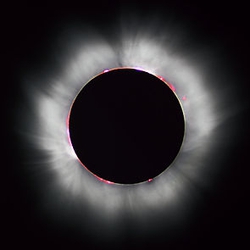 Astronomical event where one body hides another