DREP is a decentralised ecosystem based on Blockchain technology which empowers various Internet platforms to quantify and monetise reputation value.

to empower internet platforms to solve their pain points, restructure their value

ecosystem and facilitate their transition and acceleration via reputation-centered

both platforms and users.

● The Hub for Reputation Data, Reputation-backed Assets and Currencies 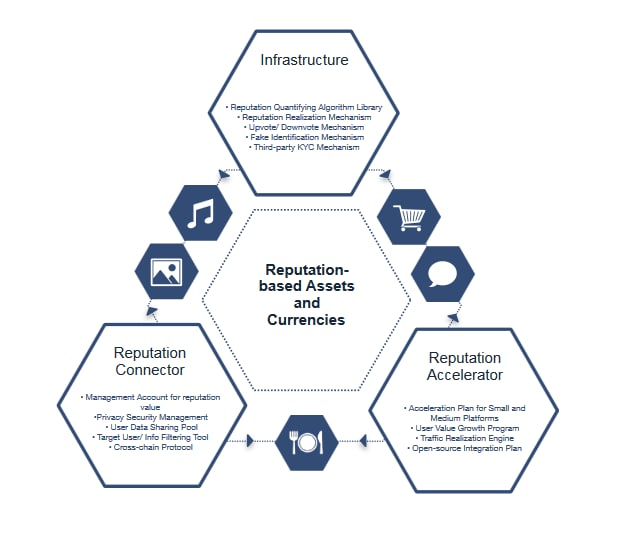 DREP’s vision: to build a blockchain platform based on reputation system for internet

applications where values are redistributed and reactivated using the advantage of

DREP will ultimately build: a reputation connector that breaks the data barrier across

backed by reputation. Meanwhile, DREP will provide a more customized and private 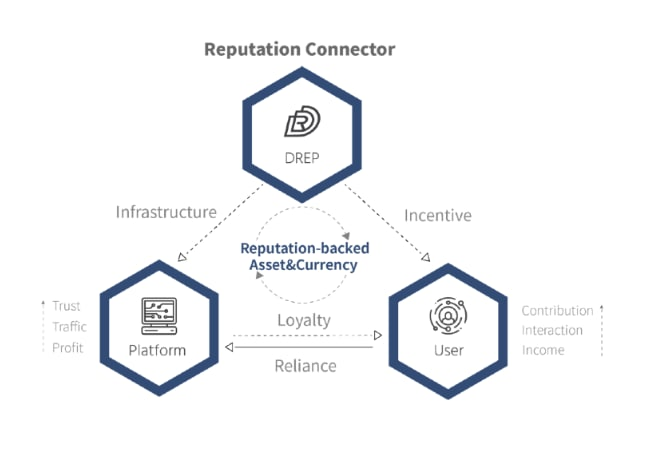 DREP’s vision: to build a blockchain platform based on reputation system for internet

applications where values are redistributed and reactivated using the advantage of

DREP will ultimately build: a reputation connector that breaks the data barrier across

backed by reputation. Meanwhile, DREP will provide a more customized and private

● Definition of Reputation under DREP System

intrinsic values assigned to it on the internet platform. The carriers of this reputation al

as novels, music, TV series in all forms of content. As a good reputation tends to have a

positive overflowing effect on the things associated with it, it may be classified as a form

of intangible assets in the social environments, being represented by the degree of its

of all participants on the internet, including publishing content, commenting, rating,DREP WHITE PAPER

the realization of smart contract and algorithm trust, participants with high reputation

characteristics can accumulate relatively higher reputation value and gain the 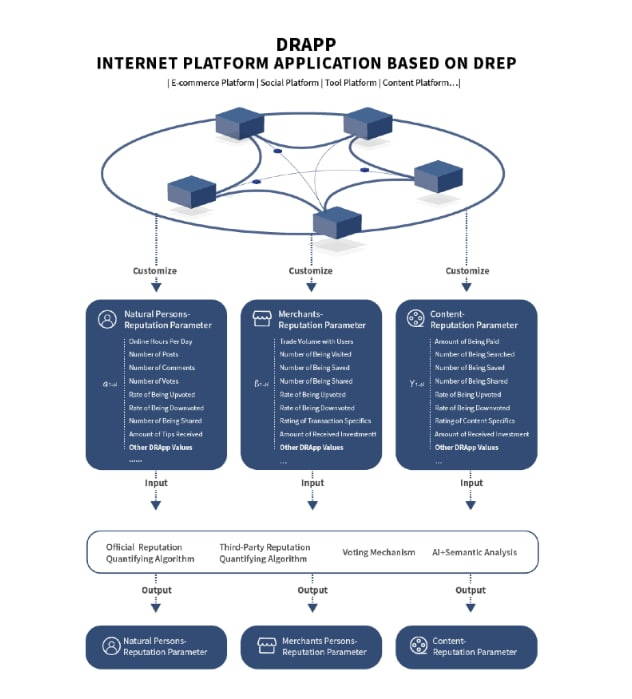 the realization of smart contract and algorithm trust, participants with high reputation

characteristics can accumulate relatively higher reputation value and gain the

high quality content to the platform and community, such as higher engagement,

rating and voting fairly, contributing to a positive environment for the community.

physical products, virtual products or other services such as providing authentic product

information, improving the quality of products and services, enhancing pre-sales and after-sales support and awareness. They tend to exercise strict quality control on the

Similarly, content which are supported or endorsed by highly reputable actors, tend to

possess better credibility, quality and a greater degree of positive influence. Most times,

aim to enable internet platforms to release their own tokens under DREP, which are

linked to reputation values. As more internet platforms join, it enables us to build an

ecosystem where internet participants on these platforms voluntarily maintain their

reputation and conduct a series of activities around it such as voting, endorsements,

tipping, publications and commerce. There are four main economic incentive models to

support the ecosystem: the VOTE Economic Model, which encourages high-quality 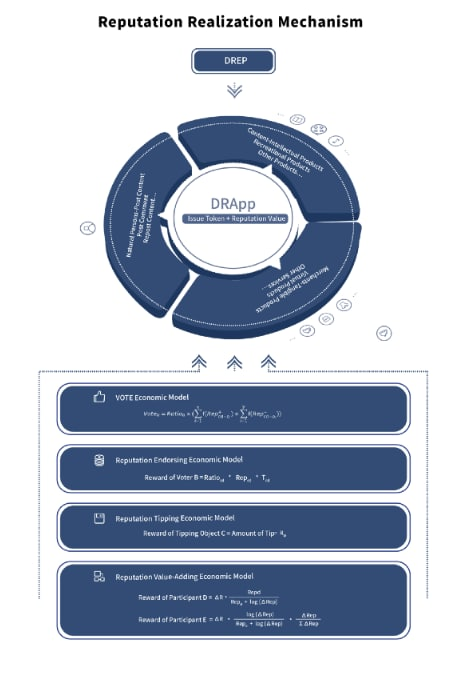 ● VOTE Economic Model: Participants can “upvote” or “downvote” content and

subsequent social or commercial impact of such voting subjects. Before each

vote, participants can decide on the amount of reputation value for endorsement

and that value will be frozen. Therefore, only a limited number of votes can be

made for a given reputation value. The voting subjects will gain the rewards from

from 60% of rewards generated in each block.

● Reputation Endorsing Economic Model: To ensure the objectivity of each vote,

subjects. Eventually a result will be determined based on the final number of

upvotes and downvotes, and the side with a higher amount of reputation value

party will lose the staked reputation value to subsidize the winning party.

● Reputation Tipping Economic Model: Participants in the DREP system can

also use the tokens on the DRApp platform to tip users, content, products and

services that they support. The tips will go directly to those who get tipped.

● Reputation Value-Adding Economic Model: This model will allow supporters of

certain users, content, products or services to stake part of their reputation value

along with their favored subjects to demonstrate their support. Based on the log

value of the staked reputation value, the supporters may get a corresponding

reward from the increase in the overall repetitional value of the subjects over time.

each user’s reputation values, which are referenceable and linked to their public key

addresses on every DRApp (internet platform). With this data, DREP is able to facilitate a

between blockchain applications and strengthens interconnectivity of data across

DRApps. Internet platforms can then tap onto DREP's reputation data sharing pool to

acquire users by targeting users according to custom-set reputation criteria. This function

can strengthen the synergy among different DRApps.

internet’s reputation systems. Since the development of blockchain industry, there have

been several applications, public chains or private chains projects that have begun

exploring the reputation quantifying mechanism within certain industries, generating to a

valuable pool of reputation data. Starting off from its own reputation eco-system, DREP will expand externally to ultimately reach the goal of establishing a cross-chain

infrastructure or application within the reputation system. The long-term goal as part of

DRApps within the reputation system.

What Core Problem Does DREP Intend to

●Lack of Community Growth Mechanism and Weak Tokenomics within

loose. Before the launch of tangible applications, the primary existing means of group

management is via messaging applications, with bigger groups forming organic

communities on their own. Due to the lack of contribution incentives and growth

mechanisms, members have a high tendency to speculate, with low user loyalty and

switching costs. Meanwhile, the speculative value of tokens within the applications tends

to be higher than the usage value, so much so that user loss rate becomes high when

influenced by market fluctuations. Such is the reason why there are many cases of

According to the Deloitte Insights report <Evolution of blockchain technology – Insights

is as high as 92%, mostly due to the lack of actual application scenarios and the quick

●Higher Demand for Tokenization than Decentralization of Small and Medium

and internet platform user growth that are quick, simple with easy to access, to serve the

community. In the one-stop value tokenization solution, these platforms can activate its

to achieve sustainable community management. This will largely decrease the time it will

take for them to learn about blockchain technology, understand the way to connect

and promote the project.

blockchain applications, their core demand is to have a digital currency used internally for

necessarily effective decentralized ecosystem. These platforms might not be able to

learn about blockchain technology quickly and find the most corresponding application