the Tubu region, which includes 9 prefectures,we will consider each of them in more detail:
Aichi Prefecture

In the capital of the prefecture – the city of Nagoya - a huge number of attractions. The most recognizable of them is Nagoya Castle, founded by the first shogun of the Tokugawa Ieyasu dynasty. During the Second World War, the castle was destroyed, but the locals restored it.The Osu Kannon Temple was also reconstructed. Its main relic is a statue of the goddess, according to legend, carved personally by the founder of the Shingon Buddhist school, the legendary monk Kukai. Unlike the building that burned down several times, the statue miraculously escaped danger. The temple is famous for its library containing about 15 thousand volumes. The main value of the collection is the oldest manuscript of the Kojiki, a chronicle of the deeds of Shinto deities.Another famous Nagoya temple is the Shinto shrine of Atsuta-jingu, built in the II century AD and is the second largest in the country. It is believed that one of the imperial regalia is kept here, namely the sword of Kusanagi no tsurugi, which was found by the wind god Susanoo in the body of the eight-headed serpent Yamata no orochi.Atsuta-jingu annually hosts a large-scale Atsuta festival, during which ritual dances are performed, Japanese taiko drumming competitions are held and platforms strewn with lanterns are put up.The most popular museum in Nagoya is the Tokugawa Art Museum. The basis of his collection consists of items belonging to this dynasty of shoguns. You can see armor, swords, theater accessories and costumes, household items and much more. The main value of the museum is one of the oldest scrolls of the Heian novel "The Tale of Genji" by Murasaki Shikibu, provided with illustrations. In addition, the museum has a library open to the public, some of the books in which came from the Tokugawa family. The descendants of the shoguns still manage the museum's activities.There is also an interesting science museum in Nagoya, where you can watch the most incredible experiments and visit the world's largest planetarium at any time.Since 2003, the World Cosplay Summit has been held in Nagoya, during which the city is flooded with characters from various games and anime.

Fukui Prefecture is famous all over the world for its antiquities. On its territory near the city of Katsuyama, the remains of five previously unknown species of dinosaurs were found. The most famous of them are Fukuisaurus and Fukuiraptor, whose skeletons are exhibited in the Dinosaur Museum, which is one of the largest in the world.The most popular natural monument of the prefecture is the columnar coastal rocks of Tojimbo. They were named after a Buddhist monk who was thrown into the sea next to them. According to legend, his angry spirit still lives in this place.Another natural object that deserves attention is Wakasa Bay, one of the places with the cleanest water on the coast of the Sea of Japan. On its shore there are Five multicolored Mikata Lakes. Because of the different composition, the water in them differs in color.There are several castles in the prefecture. In the city of Fukui - Maruoka, nicknamed the "castle in the fog". It is reliably known that during its construction, a human sacrifice was performed, immuring a woman in the base. Oddly enough, this gloomy story does not prevent anyone from enjoying the beauty of cherry blossoms in spring.The city of Ono also has its own castle, which is called Echizen Ono. Many tourists and photographers are waiting for a good moment when the fog will descend on the city and the castle, located on a hill, will appear as if floating in the clouds. 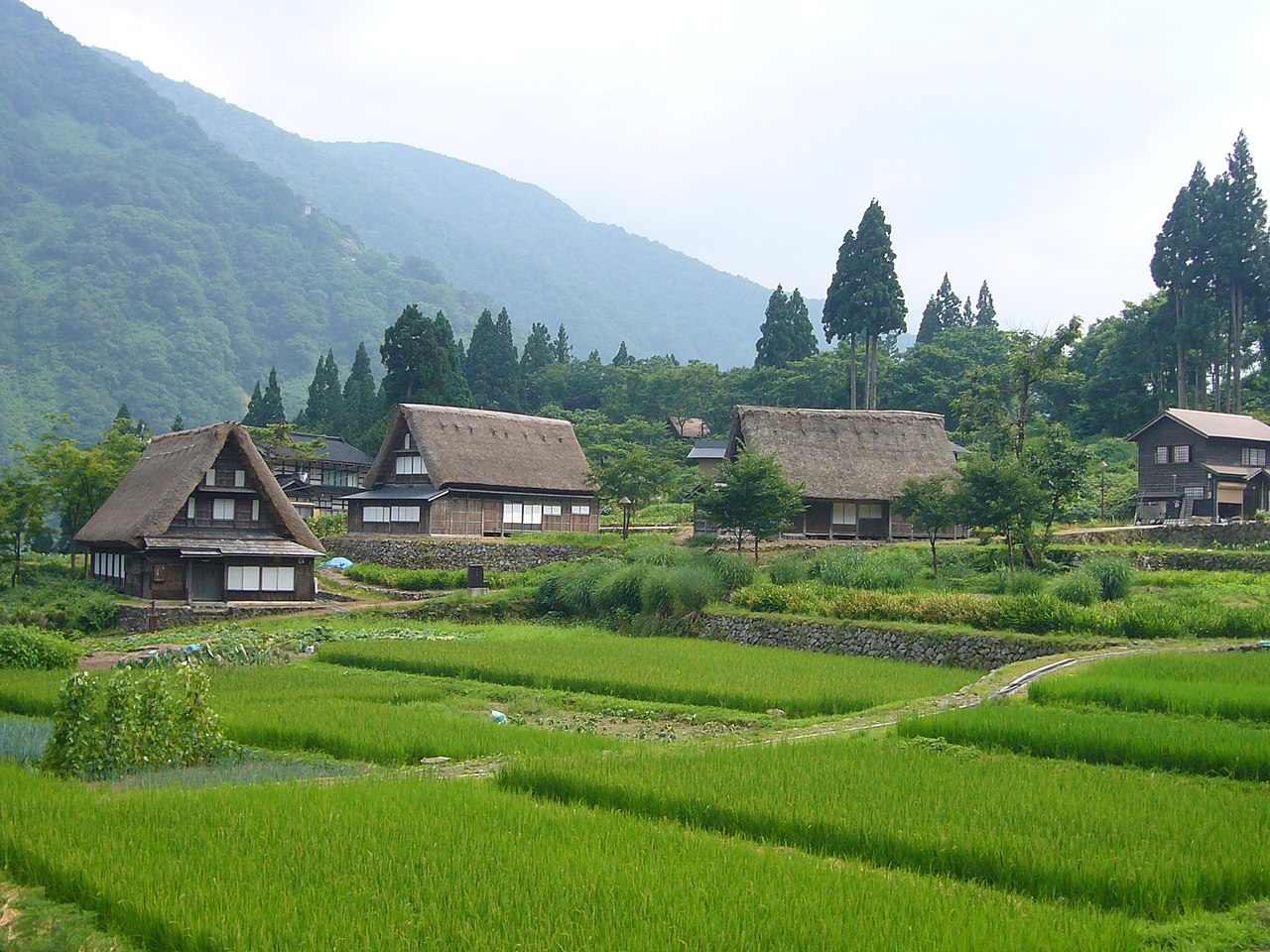 The main pride of Gifu Prefecture is the village of Shirakawa-go, which has preserved the original buildings built in the style of "gasse-zukuri". Its distinctive feature is the steep roof, ideally adapted for natural snowfall. The houses in the village have remained unchanged since the beginning of the XIX century. Now many of them are open to the public as museums of history and local crafts – the main occupation in Shirakawa-go was silkworm production - but people still live in some of them.Near the town of Saki there is a small pond that attracts a huge number of fans of Claude Monet's work from all over the world. Thanks to the colorful carp and picturesque water lilies, the pond seemed to have descended from the canvases of the great painter.

Kanazawa, the capital of the prefecture, is home to Kenroku-en Park, one of the three famous parks in Japan. It was founded in the XVII century by the Maeda Daimyo, who also owned the nearby Kanazawa Castle.

Mount Hakusan, considered one of the three most beautiful in Japan, is located in Ishikawa. A national nature reserve has been established in its vicinity to preserve the diversity of rare plants growing here. 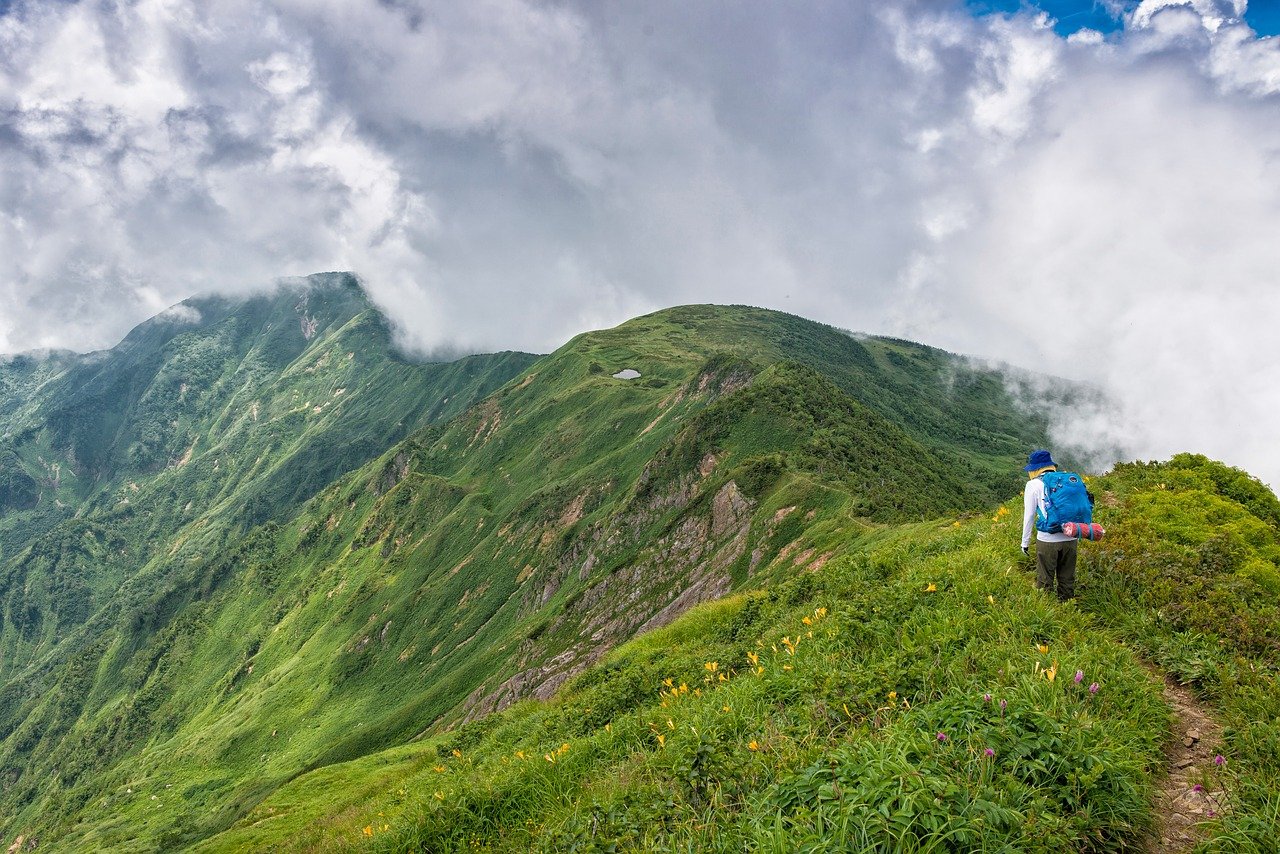 The most spectacular event of the prefecture is a series of Kiriko festivals held on the Noto Peninsula. Kiriko are huge lanterns up to 15 meters high. During the festival, they are installed on platforms and carried around the city. The first mention of this tradition associated with the agricultural calendar dates back to the XVII century. The festival is held in several cities, and each has its own customs, only Kiriko lanterns remain common. 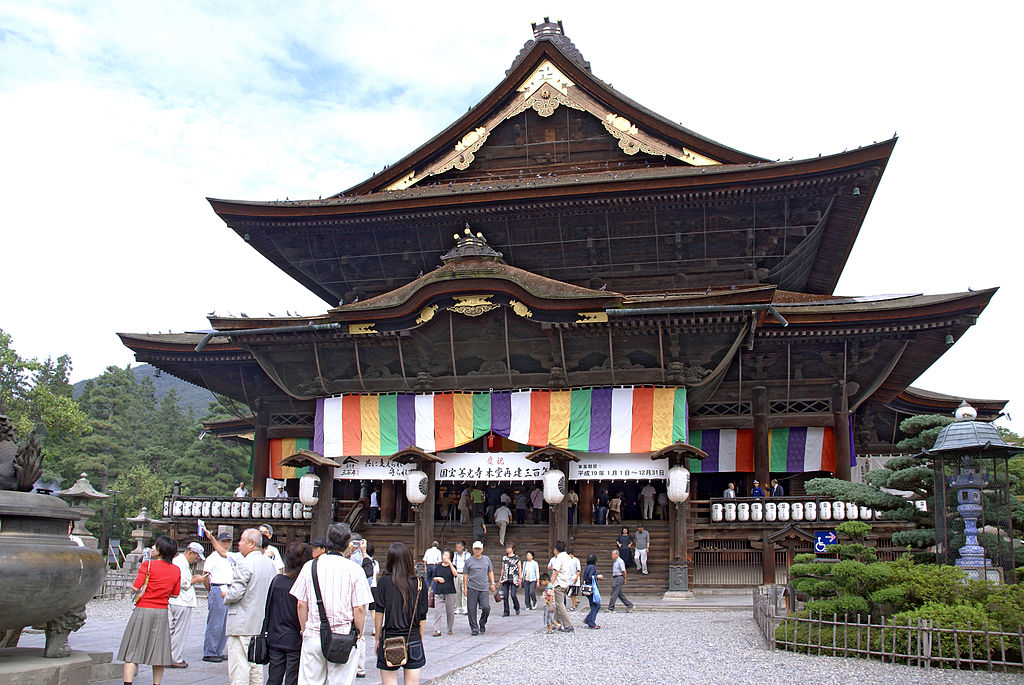 In the capital of the prefecture, the city of Nagano of the same name, there is the Zenko-ji temple, built in the first half of the VII century and considered by many to be the main attraction of the entire prefecture. This temple still does not lose pilgrims: more than 6 million people come to pray within its walls every year. 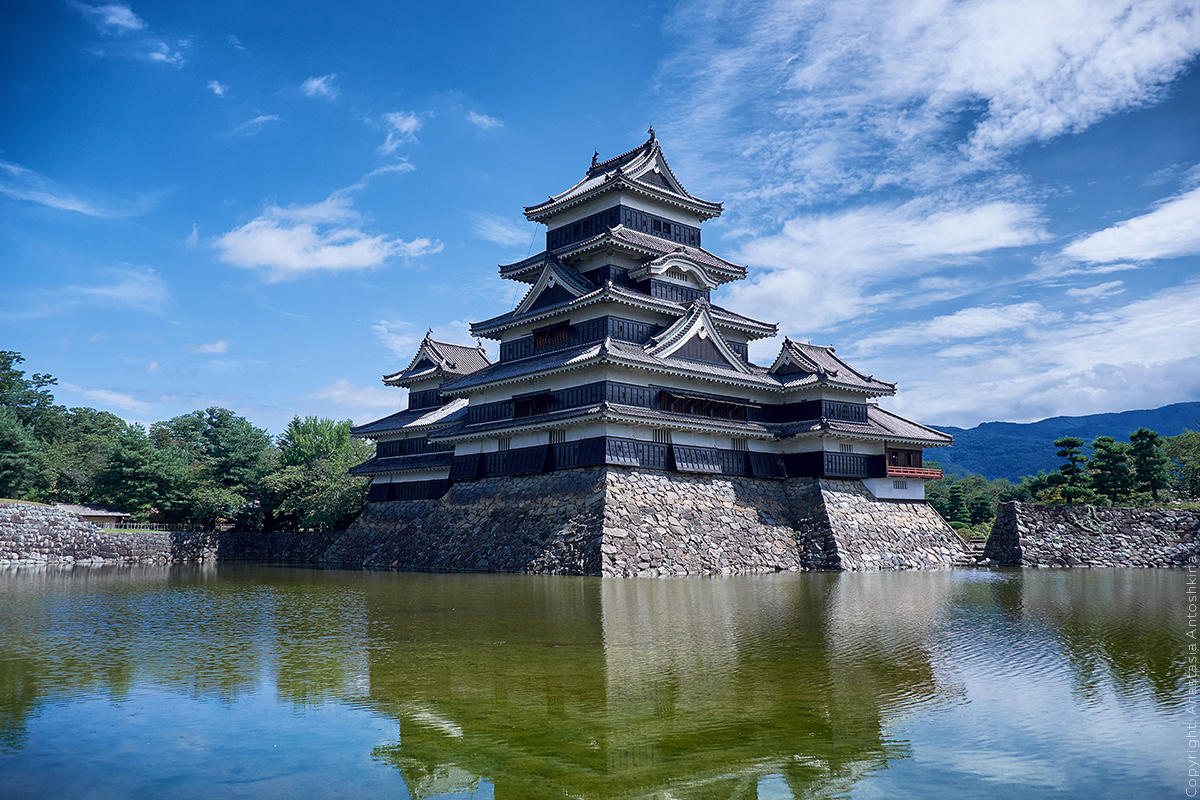 Another equally well–known symbol of the prefecture is Matsumoto Castle, nicknamed Raven Castle for the black color of the walls. He makes the greatest impression during the cherry blossom. Several festivals are held on the prizamkovaya territory, for example, the Taiko Japanese Drum Festival and the Ice Sculpture Festival.

Yamanouchi is home to the famous Jigokudani Park with geothermal springs, where Japanese macaques constantly bask.In the town of Obuse, the great master of ukiyo-e Katsushika Hokusai once lived, now there is a museum dedicated to him, storing many of his wonderful works. Not far from Obuse is the Gansen Temple, in which Hokusai painted the ceiling. 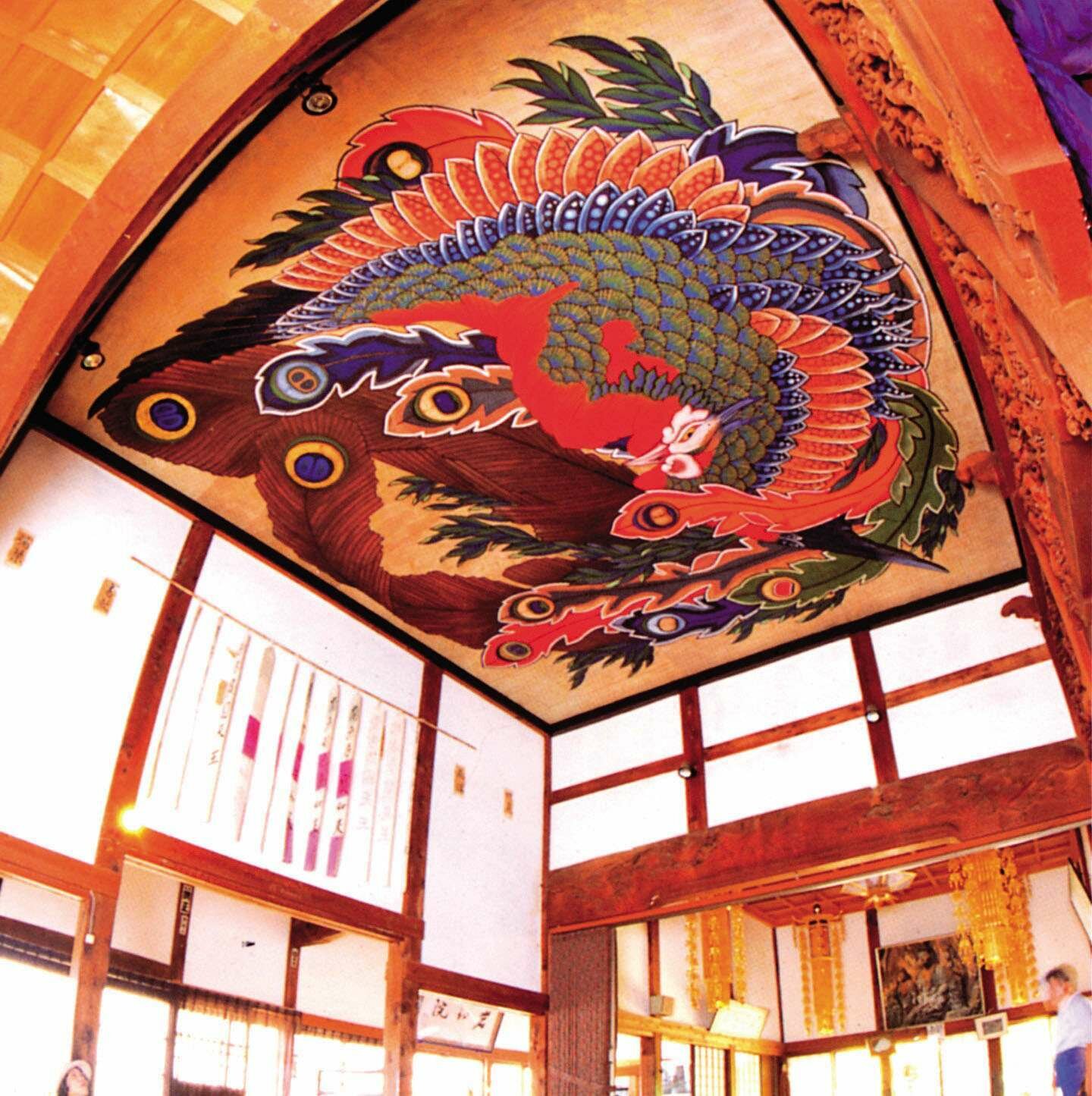 In Japan, this prefecture is known primarily as a place of rice production. The most famous of the varieties bred there is Koshihikari, which is considered the most delicious in Japan. In Niigata, rice fields are located on Hoshitoge terraces, striking in their picturesqueness at any time.Niigata is home to Toki birds or red-legged ibises. This bird is a protected species and the Japanese are making a lot of efforts to increase their population. The place where you can see birds is the Toki-no-Mori Protected Park, located on Sado Island.From a historical point of view, the city of Jieetsu, where the commander Uesugi Kenshin lived during the Sengoku period, is very interesting. Here are the ruins of Kasugayama Castle, formerly owned by Kenshin, and the Rinsenji Temple, where he lived and studied for 7 years. Kenshin's grave is also located in the same temple.In the town of Tokamati there is a beautiful beech forest Bidzin-bayasi, which means "grove of beauties". 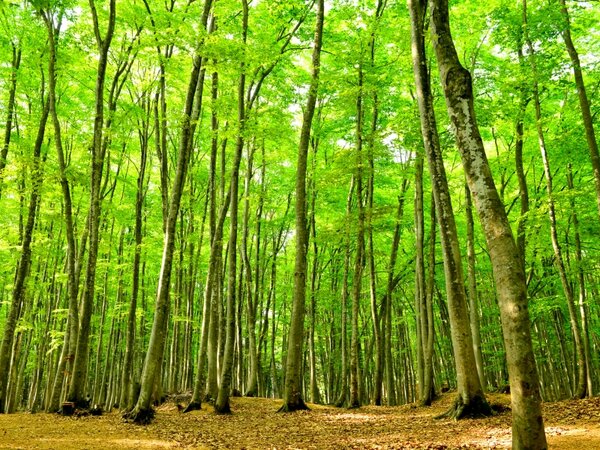 The most famous symbol of Japan, Mount Fuji, is located on the territory of this prefecture. Hundreds of thousands of people annually climb to its top to make a pilgrimage to local temples or admire the beautiful scenery. 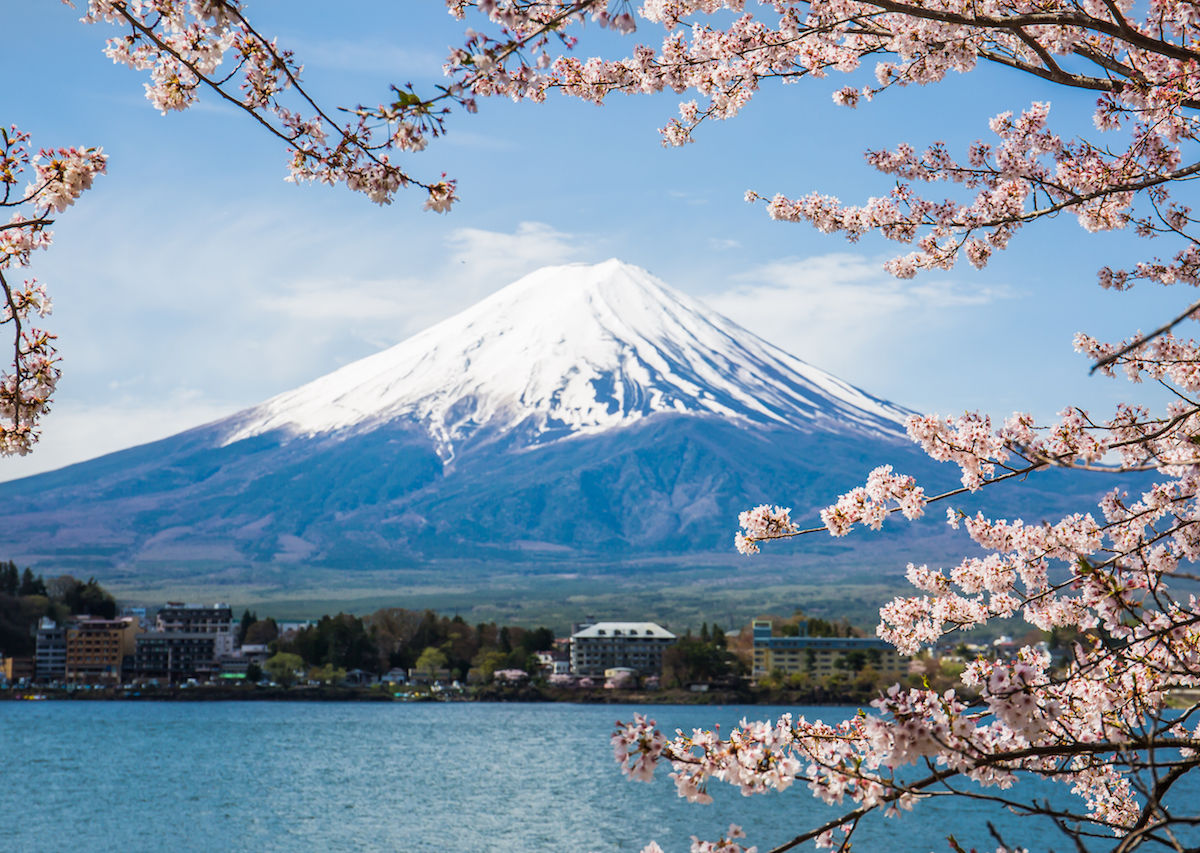 A huge part of Shizuoka is reserved for tea plantations. It is believed that for the first time tea was brought here from China by the Buddhist monk Annie, also known as Benen and Seichi Kokushi. Tea of this variety is still grown in Shizuoka, it is believed that it promotes longevity. On Monk Annie's birthday, a Tea Day festival is held in Shizuoka. It is said that in addition to tea, Annie brought udon noodles from China, and the god of science Tenzin, who appeared to him in a dream, advised him to make a trip to the Celestial Empire.Hamamatsu Castle and the ruins of Sumpu Castle are located in the prefecture. Both of these buildings are associated with Tokugawa Ieyasu, who lived in both fortresses.The main dish of Hamamatsu is eel. It was in this place that it was first bred for further use in cooking.A kite festival is held annually in Hamamatsu, and in the village of Heda on the Izu Peninsula there is the Putyatin–matsuri festival dedicated to the Russian Admiral Count E.V. Putyatin, who established diplomatic relations between Russia and Japan. 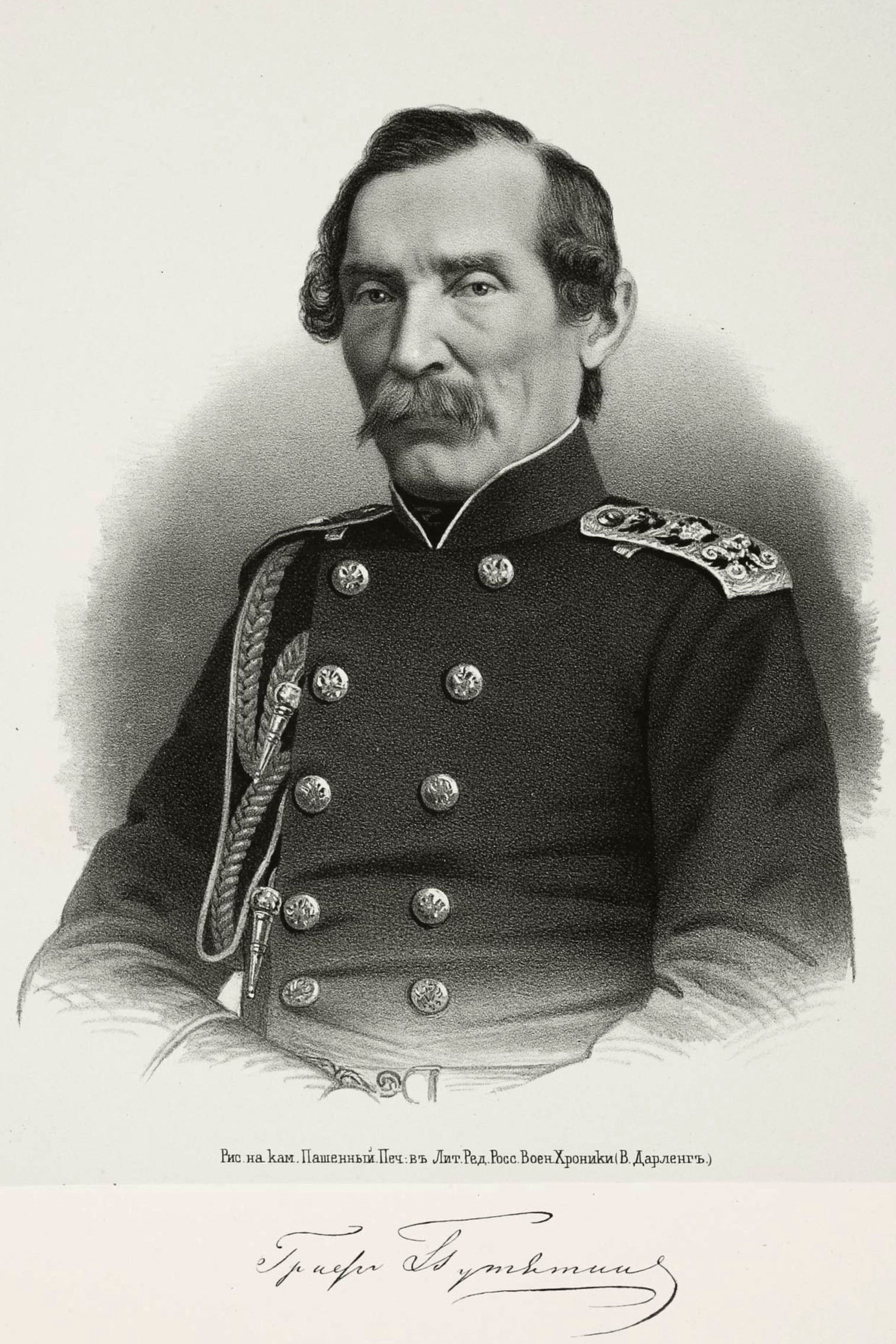 In this prefecture is Mount Tateyama, one of the three most beautiful mountains in Japan, along with Fuji and Hakusan. On the way to the mountain there is the Kurobe Gorge, through which the railway route passes, including high bridges.In the village of Gokayama, as in Shirakawa-go from Gifu Prefecture, traditional buildings in the style of "gasse-zukuri", whose age ranges from 100 to 400 years, have been preserved.In the city of Takaoka there is a beautiful park of tulip Tones, in which for more than 100 years tulips of a wide variety of varieties and shades have been grown.There is also a Buddhist temple of Zuiruji, which is an excellent example of Zen architecture and was founded by representatives of the Maeda clan.

The most spectacular and famous festival of the prefecture is Ovara kaze-no-Bon, which takes place in early September. Like many other Japanese festivals, its main purpose was to expel evil spirits and pray to the gods for a good harvest. A distinctive feature of the festival is the costumes of the dancers: they must be wearing a special straw hat covering their faces so as not to anger the deity. 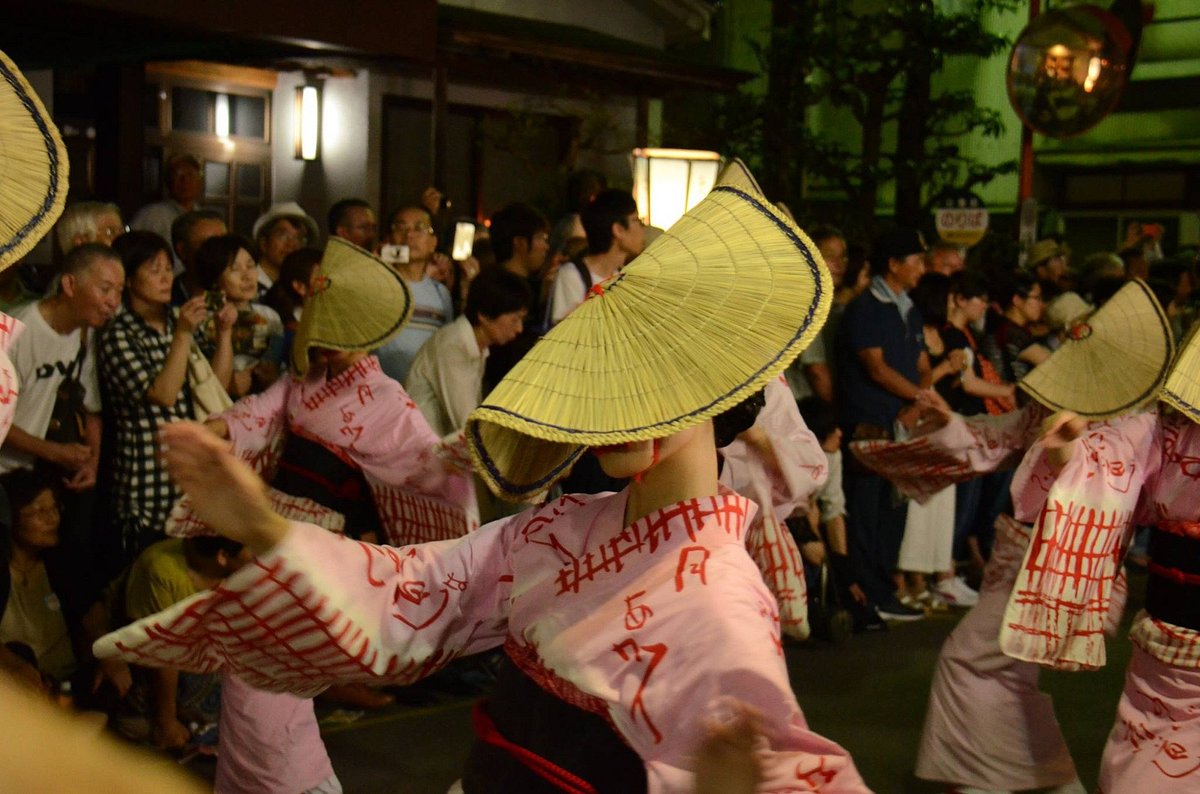 One of the slopes of Mount Fuji overlooks Yamanashi Prefecture. It is from this side that the most popular and convenient route of climbing the mountain begins, which is called the Yoshida trail.On the border with Shizuoka Prefecture there are Five Fuji Lakes, near each of which there are various attractions of a very diverse nature. So, without moving away from Lake Sai, you can visit the ice caves of Narusawa, whose ice columns often reach 30 meters. 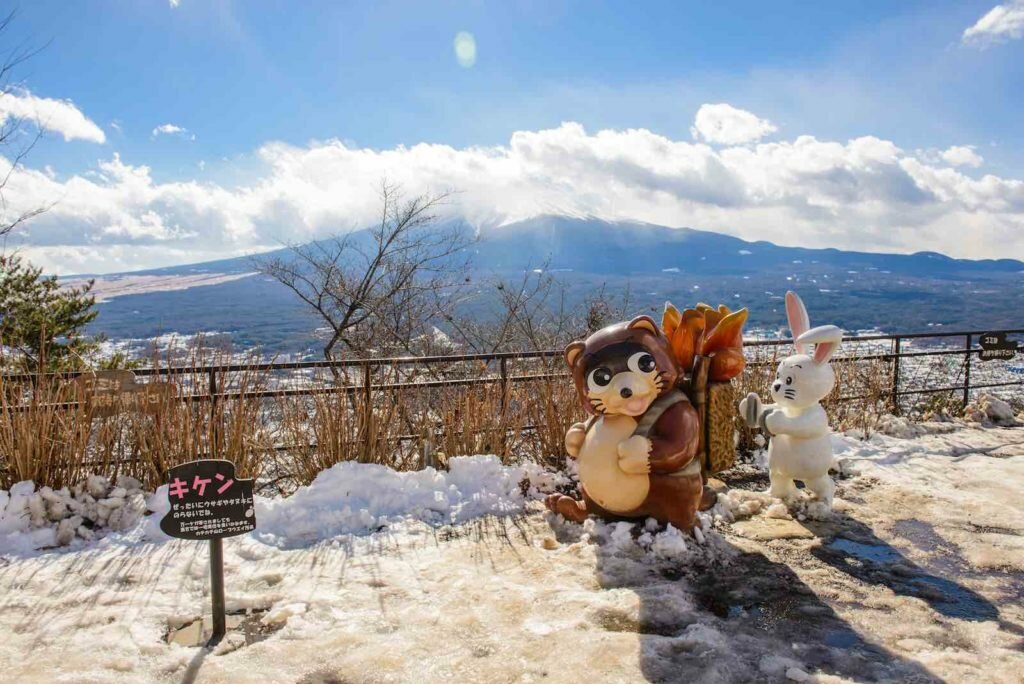 And by Lake Kawaguchi is Mount Tenjo, better known as Kati-Kati. Yes, yes, this is the same mountain that appears in the famous folk tale about the evil Tanuki and the white rabbit who took revenge on him. At one time, this fairy tale was processed by the famous writer Osamu Dazai.In the city of Kofu during the Sengoku era lived the commander Takeda Shingen, also known as the Tiger of Kai. Every year, a festival is held in his honor, during which hundreds of people dressed in medieval costumes parade through the city. A mandatory item of the festive program is the reconstruction of one of the battles of Kawanakajima. 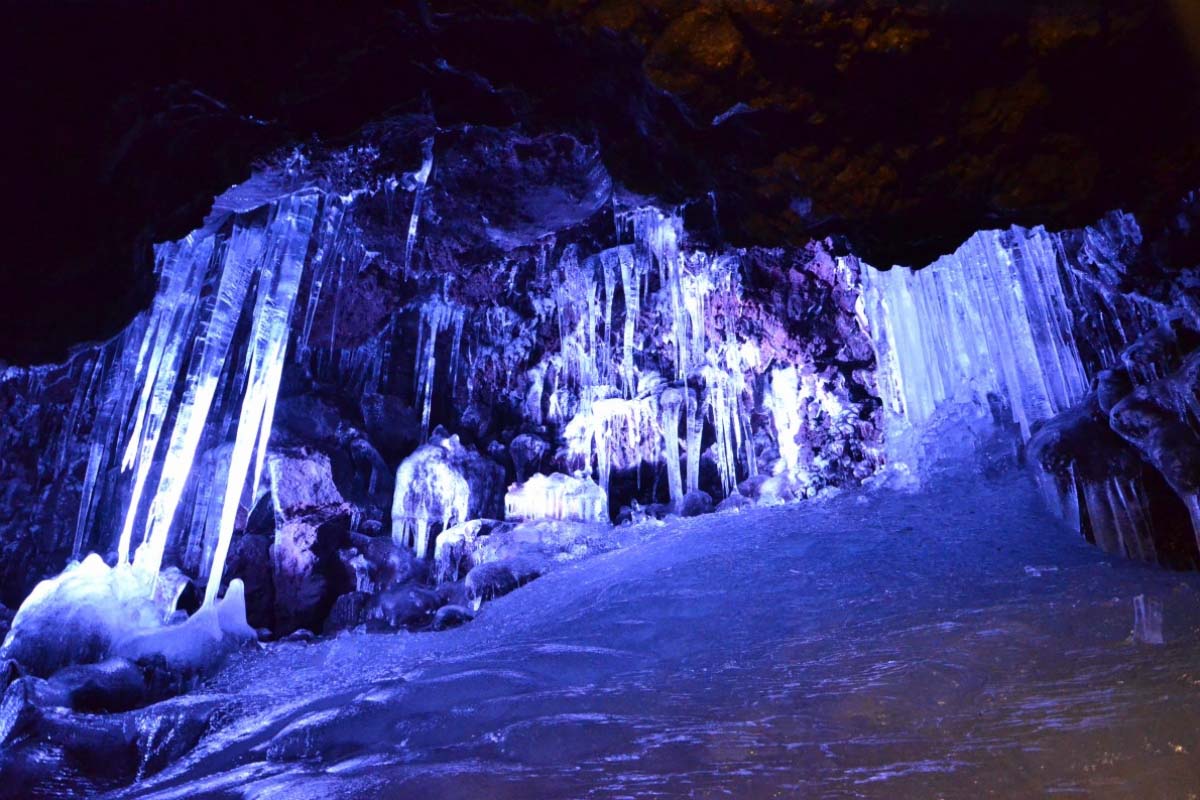 In the city of Kofu during the Sengoku era lived the commander Takeda Shingen, also known as the Tiger of Kai. Every year, a festival is held in his honor, during which hundreds of people dressed in medieval costumes parade through the city. A mandatory item of the festive program is the reconstruction of one of the battles of Kawanakajima.Yamanashi Prefecture is famous for its grapes of European origin. Historians are still looking for an answer to the question of how grapes from Europe penetrated to Japan, if the first mention of it dates back to the XII century.