Who is Christie Brinkley?

Christine Lee Hudson, more popularly known as Christie Brinkley, is an American model, actress, and a businesswoman. She is famous for being the face of the American cosmetics company ‘CoverGirl’ for a period of 25 years. She is the longest serving representative for any cosmetic brand and also the first model to feature in three consecutive ‘Sports Illustrated Swimsuit’ Issue covers. Beginning in the late 1970s, she featured as the cover girl for the ‘Sports Illustrated’ magazine through the early 1980s. Brinkley, in her thirty-year long career, has also appeared in several television shows as well as in a number of films. Her notable works in the show business include ‘Mad About You’, ‘Vegas Vacation’, ‘Jack and Jill’, and ‘Parks and Recreation’. Brinkley has also established her own chain of businesses which include real estate, eyewear, hair extensions, and beauty products. She has appeared in over five hundred magazine covers and has done modeling for almost all top brands. An avid animal lover and human rights activist, Brinkley has been named one of most attractive women of all time by several popular magazines. 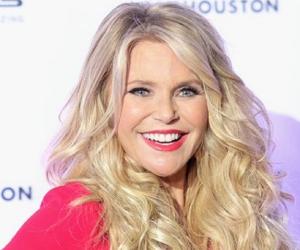 Christie Brinkley was in Paris, studying art, when she grabbed the attention of American photographer Errol Sawyer in a post office. Sawyer was the first photographer who made her portfolio and introduced her to John Casablancas, the founder of Elite Model Management agency. Brinkley’s fortunes turned rapidly from this point. She met with Patrick Demarchelier and Mike Reinhardt, two renowned fashion photographers, and was introduced to Eileen Ford, the co-founder of Ford Models. Brinkley went to California and met with Nina Blanchard, an associate of Eileen Ford, and grabbed three national advertisement campaigns.

Brinkley appeared on the cover of ‘Glamour,’ a women's magazine, multiple times and made a name for herself as a model. She was offered an astonishing 25-year long modeling contract by the American cosmetics brand ‘CoverGirl’. Once this contract expired, she was again signed to promote their mature skin care products.

Brinkley was the first female model to feature on the cover of ‘Sports Illustrated Swimsuit Issue’ in three consecutive years. She posed for the magazine in 1979, 1980, and 1981. She later appeared in their ‘40th Anniversary Issue's Hall of Fame’ as well as ‘50th Anniversary The Legends’ specials. She has also posed for ‘US’, ‘Rolling Stone’, ‘Vogue’, and ‘Harper's Bazaar’ and has represented top brands like ‘MasterCard’, ‘Diet Coke’, ‘Anheuser-Busch’, ‘Nissan’, ‘Revlon’, ‘Yardley of London’, and ‘Black Velvet’.

After earning popularity as a model, Brinkley entered the show business as well. She was featured in ‘National Lampoon's Vacation’, and later in the sequel, ‘Vegas Vacation’, as ‘The girl in the red Ferrari’. She performed in the long-running musical ‘Chicago’ as ‘Roxie Hart’; she also reprised her role in Broadway later. She appeared in ‘Mad about You’, ‘Celebrity Weddings InStyle’ (as a host), ‘Today Show’, ‘Jack and Jill’, and ‘Parks and Recreation’.

Brinkley runs a chain of businesses through her umbrella company CB Inc. Her businesses include beauty products, eyewear, sparkling wine, real estate, as well as hair extensions. She has developed an industry worth over US$250 million.

Who is Christie Brinkley? Everything You Need to Know

Who is Christie Brinkley? Everything You Need to Know