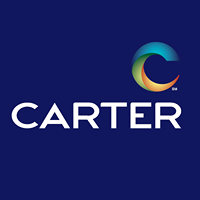 In 1958, Frank Carter and Ewell Pope started the company as Pope & Carter. In 1963, the company brokered the 2,000-acre Six Flags Over Georgia Deal.

In 1970, Crow, Pope, & Carter was formed, and the company entered the property management business.

In 1971, the company expanded to Charlotte and continued developing malls.

In 1980 Carter expanded to Birmingham. In the same year it received its first leasing assignments for Coca-Cola US.

In 1982, Carter issued the first Carter Report and hosted the Carter Breakfast.

In 1991, Carter completed Carolina Place in Charlotte and St. Joseph’s Center for Specialty Medicine in Atlanta.

In 1996, Carter merged with Forsyth in Winston-Salem and Newport Partners in Tampa and Orlando.

In 2002, Bob Peterson took over the role of President/CEO.In 2004, Carter was selected to project manage, property manage, and lease the office portion of Atlantic Sation. The following year Carter relocated its headquarters to 171 17th Street in Atlantic Station. Scott Taylow was named President/CEO.

In 2006, Carter was awarded interiors project management for the American Cancer Society and Newell Rubbermaid.

In 2007, Make-a-Wish was selected as Carter’s new charitable partner. Carter was selected as the master developer and equity partner for The Banks, Cincinnati's landmark public-private mixed-use project.

In 2009, Carter increased its healthcare and data center capabilities through strategic alliances and promptly began work on $500 million of related projects.

In 2011, Carter’s Brokerage and Property and Facility Management divisions were acquired by Cassidy Turley.

In 2016, Carter delivered Phase II-A of The Banks.

In 2017, Carter closed on a redevelopment of Summerhill, an 83-acre mixed-use project in downtown Atlanta.

In 2018, Carter purchased the MET, a 1.1 million square foot historic warehouse in Southwest Atlanta. City Springs residential and retail opened. Carter broke ground on a mixed-use deal with the Morehouse School of Medicine, which will hold 187 units of the first-ever student housing units on campus.

1987, Carter-managed Colony Square cited as Office Building of the Year

1991, NAIOP taps Carter as Developer of the Year

2015, Carter received an Award for Excellence in Sustainable Rehabilitation from the Georgia Trust for Historic Preservation for Campbell Hall and was awarded Student Housing Business Innovator Award for Best Mobile Marketing Campaign at the Interface Conference

2019, The Atlanta Urban Design Commission awarded Carter projects with four awards at the 42nd Annual Design Awards Ceremony, including the Community Design Award by NPU V for the Redevelopment on Georgia Ave along with Kronberg Wall and three Awards of Excellence for the Redevelopment on Georgia Ave., 715 Peachtree, and the Ralph David Abernathy Blvd at the MET