She was born on October 2, 1986, in Los Angeles, California to a Brazilian-American family. Her full name is Camilla Belle Routh. Her mother, Deborah Gould was a fashion line designer in Brazil and is currently Camilla's manager. Father, Jack Routh is the owner of a construction company. Camilla was named after a character in a popular Brazilian soap opera.

At the age of nine months Camilla began acting in advertising for newspapers and television. In the nineties, she appeared in several films made for TV and video distribution, as well as in small roles in fairly large productions: "The Little Princess" (1995) Alfonso Cuarón, "The Lost World: Jurassic Park 2".

In 2005, Camille starred as the daughter of the hero Daniel Day-Lewis in Rebecca Miller's "The Ballad of Jack and Rose," after which critics began to talk about the talent of the young actress. Roles in independent productions of "Chamskrabber" (2005) Aryeh Pocin and "Soul of Silence" (2005) Jamie Babbitt were also favorably received by the press.

Belle's recent work includes the lead role in the remake of the 1979 classic thriller When a Stranger Calls, as well as involvement in the massive blockbuster 10,000 B.C.

In addition to English, Camilla is fluent in Portuguese and Spanish. Well-played on the piano.

The actress is engaged in charity work, taking part in the project "Kids with a Cause", helping children suffering from hunger, poverty and violence.

Her friends and family call her by her middle name Belle (French for "beauty"). 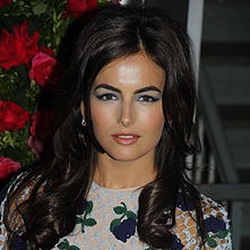