COVID-19 is the abbreviated name for coronavirus disease 2019, a respiratory disease caused by a novel coronavirus strain called SARS-CoV-2.

COVID-19 is the abbreviated name for coronavirus disease 2019, a respiratory disease caused by a novel coronavirus strain called SARS-CoV-2. COVID-19 was first detected in Wuhan City, China and the outbreak was declared a public health emergency of international concern on January 30, 2020 by the World Health Organization (WHO). On March 11 the WHO stated that the COVID-19 outbreak is characterized as a pandemic, meaning worldwide spread.

In late December 2019, clusters of patients with pneumonia were epidemiologically linked to a seafood and wet animal wholesale market in Wuhan, Hubei Province, China, and the novel coronavirus was found to be the source.

Management solutions to reduce the spread of COVID-19 include: travel restrictions, patient isolation, and supportive medical care. As of March 3, 2020, according to an article published in Intensive Care Medicine, there are currently no specific therapeutic interventions available for treating, or preventing the spread of, COVID-19, but there are several pharmaceuticals being tested.

A phylogenetic analysis of SARS-CoV-2 traced the likely origins of the virus to bats. Ten genome sequences of SARS-CoV-2 (2019-nCoV) from nine patients were found to have 99.98% sequence identity. SARS-CoV-2 (2019-nCoV) showed 88% identity to two bat-derived SARS-like coronaviruses, 79% identity to SARS-CoV and 50% identity to MERS-CoV. The analysis suggests that bats may be the original host and an animal sold at the seafood market may have served as an intermediate host before the virus emerged in humans. SARS-CoV-2 possesses a similar genetic organization to bat-SL-CoVZC45, bat-SL-CoVZXC21, and SARS-CoV, and the majority of it's protein coding regions are similar to bat-SL-CoVZC45, and bat-SL-CoVZXC21 with only minor insertions or deletions. One of the most notable differences was that SARS-CoV-2 sequences encoded a longer spike protein than other bat SARS-like coronaviruses, SARS-CoV and MERS-CoV.

Below is a phylogenetic analysis of full-length genomes of 2019-nCoV and representative viruses of the genus Betacoronavirus: 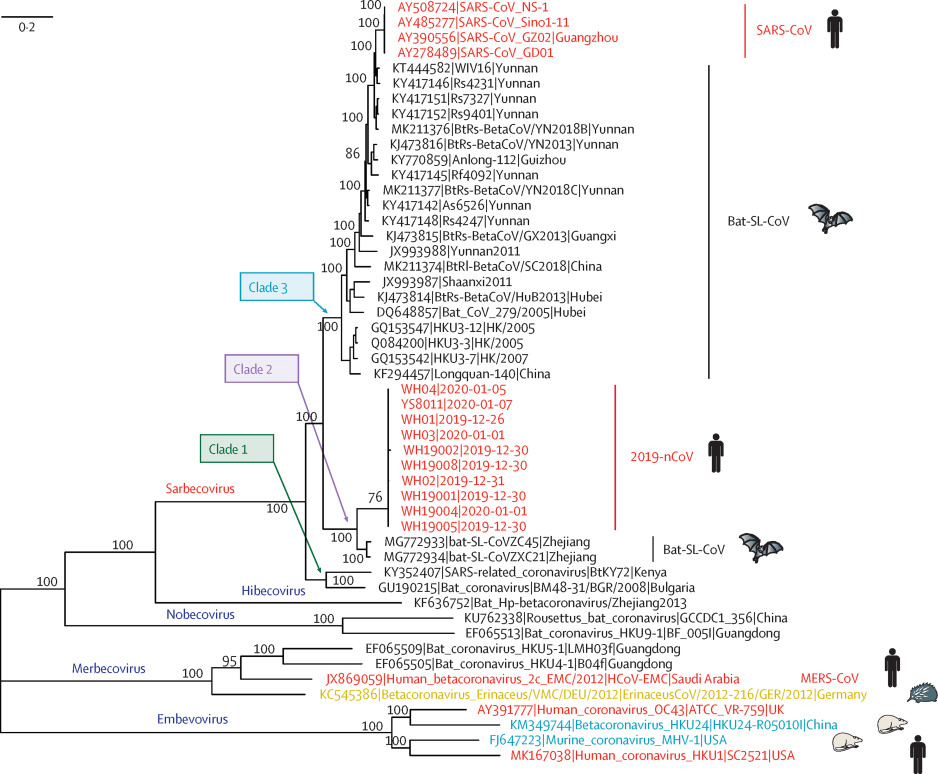 The receptor-binding domain of 2019-nCoV is most similar to SARS-CoV (C-terminal domain of S1), even when compared to more genetically similar betcoronaviruses such as MERS-CoV and BatCov HKU4. The receptor-binding domain of SARS-CoV-2 (2019-nCoV) is thought to be like other betacoronviruses and consist of a core and external subdomain. The amino acid sequence suggested that SARS-CoV-2 also uses angiotensin-converting enzyme 2 (ACE2) as a cell receptor. However some key residues in the receptor-binding domain of SARS-CoV were variable in SARS-CoV-2, including Asn439, Asn501, Gln493, Gly485 and Phe486 (SARS-CoV-2 numbering). Most amino acids essential for ACE2 binding by the SARS-CoV spike protein are conserved in SARS-CoV-2. Experimentally, cells normally not susceptible to SARS-CoV-2 made to express ACE2, allowed the novel coronavirus to enter these cells. SARS-CoV-2 (2019-nCoV) has been shown in infectivity studies using HeLa cells to be able to use ACE2 from humans, Chinese horseshoe bats, civets, pigs but not mouse ACE2 as an entry receptor. Expression of other coronavirus receptors such as aminopeptidase N (APN) and dipeptidyl peptidase 4 (DPP4) did not allow SARS-CoV-2 to infect cells. A cryo-EM structure of the spike protein of SARS-CoV-2 (2019-nCoV S) in prefusion conformation provides biophysical and structural evidence that it binds human ACE2 with higher affinity than the spike protein of SARS-CoV (SARS-CoV S). This higher affinity for human ACE2, could explain why SARS-CoV-2 spreads easily from human to human by mainly respiratory transmission. 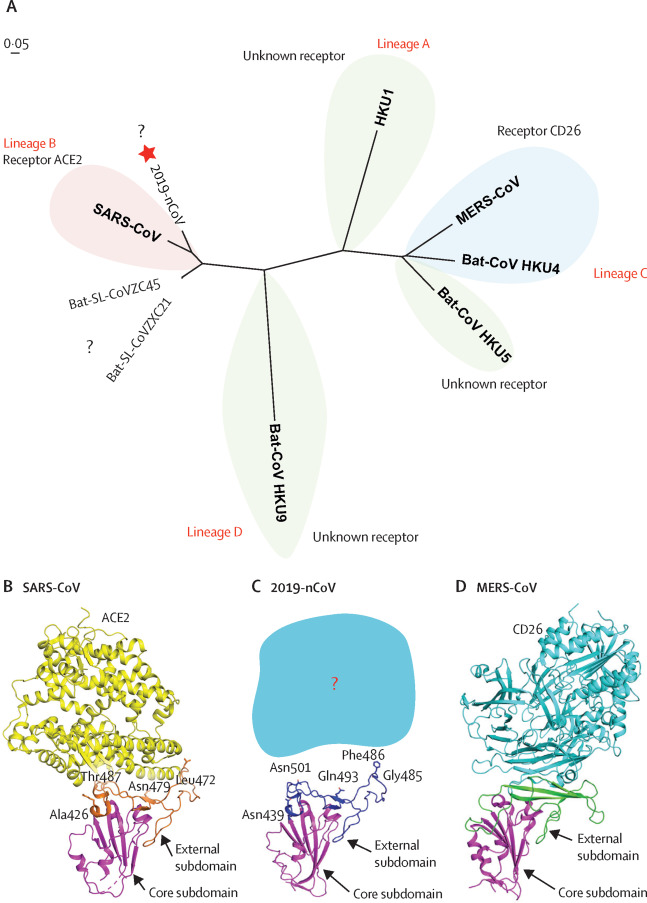 The ability of SARS-CoV-2 to enter cells through ACE2 is thought to be proportional to disease severity; suggesting individuals expressing higher levels of ACE2 may be more susceptible to experiencing negative health effects associated with SARS-CoV-2.

ACE2 is abundant in lung tissues, specifically the alveolar epithelial type II cells (AECII), which makes the lungs a likely to be the source of viral invasion. AECII cells also have high levels of several viral process related genes related to the regulation, life cycle, assembly, and genome replication of viruses, which suggest AECII expressing cells help facilitate the replication of SARS-CoV-2 within the human body.

ACE2 receptors are also found in lesser amounts in other regions of the human body in extrapulmonary tissues which include the heart, kidney, endothelium, and intestine. Due to the location of ACE2 receptors in the human body the Centres for Disease Control and Prevention have yet to confirm (as of March 3, 2020) whether SARS-CoV-2 is transmissible by touching surfaces with the virus and then touching exposed mucus membranes.

The expression of ACE2 receptors on the luminal surface of intestinal epithelial cells (cells responsible for absorbing amino acids from food) suggest the intestine is also a major entry point of SARS-CoV-2 — providing further evidence that the initial outbreak of SARS-CoV-2 came from food eaten at the seafood market in Wuhan.

ACE2 mRNA expression in adipose is higher than in lung tissue, indicating adipose tissue may be another vulnerable site for SARS-CoV-2. As obese individuals have more adipose tissue, they may be more severely affected. Certain types of tumour tissue also have a higher expression of ACE2. There is no research to demonstrate that SARS-CoV-2 infects adipose tissue, but adipose tissue has been proposed as a reservoir for human adenovirus Ad-336, influenza A virus, HIV, cytomegalovirus Trypanosoma gondii and Mycobacterium tuberculosis. Obesity has been reported to increase vulnerability to infection and increases the duration of influenza transmission. This information has was brought together by a team at the PLA General Hospital, Beijing in their report suggesting that special attentioin should be given to COVID-19 patients that have obesity or one of the following five types of cancer: CESC, PAAD, READ, KIRP and KIRC.

A study from Shenzhen China suggests that obesity increases the risk of developing pneumonia in COVID-19 patients. The association was more clear for men than women due to small number of women in the obesity group.

SARS-CoV-2 uses the serine protease TMPRSS2 for S protein priming, or cleavage of the S protein, which is part of the process for fusion between the virus and the host cell. TPRSS2 is considered, a host cell factor critical for spread of clinically relevant viruses such as influenza A viruses and coronaviruses. As TMPRSS2 is not needed for development or homeostasis, it provides a potential drug target. The serine protease inhibitor camostat mesylate blocks TMPRSS2 and is a drug approved in Japan for human use to treat chronic pancreatitis and post operative reflux esophagitis. Camostat mesylate has been shown to be effective in mice infected with SARS-CoV. The drug has been shown experimentally to block infection of cells in culture with SARS-CoV-2-like particles and with authentic SARS-CoV-2.